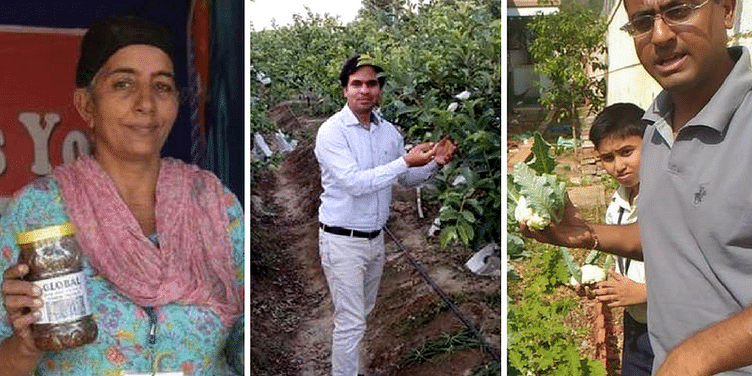 Leaving behind well-paying jobs and a comfortable lifestyle, they made the switch to agriculture to come closer to their roots.

Farming is often not viewed as a glamourous or even a profitable profession. Yet, it has now become an attractive option for some and has led them to quit their well-paying corporate jobs.

Many of these individuals maintain that the switch to farming seemed organic to them and they have been driven by the quest to contribute to this sector positively and help their fellow farmers with access to technology. Below we list a few of these inspiring individuals who made a jump from their corporate lifestyle.

Haling from Sangatpura village in Jind district of Haryana, Neeraj was an engineer by profession. However, his immense fondness for guavas led him to drop everything and begin cultivating them.

After completing his engineering, Neeraj worked as a developer for a few days. However, affection for his village and family made him return to his roots. He decided to grow a type of guava which has become popular even in big cities across the country.

Over seven acres of his farmland, Neeraj planted 1,900 of these guavas, the seeds for which he bought from Raipur. Though it involved high expenses, he was determined to grow this crop. Now, his plants have begun bearing fruits and one of the trees has yielded nearly 50 kg of guavas. These guavas are so huge that they cannot be consumed by just one person alone.

After nine years, she has not only achieved success in agriculture but has also empowered nearly 300 women by forming a self-help group. The women associated with this organisation are earning nearly Rs 20,000 or Rs 25,000.

Until 2013, Hemal Patel's corporate job had him confined to a cubicle, the only respite being his weekend trips to explore the outdoors. Visits to various villages only increased his long-held interest in farming and he thought of doing his bit to promote an organic way of life.

In 2014, he founded UrbanSoil to spread knowledge and awareness on growing one's own food in urban areas. Further through UrbanSoil, Hemal organises and conducts several workshops to teach people the techniques required to grow their own food on their terraces and balconies. So far, more than 250 participants from Pune and Mumbai have been involved in these two-day workshops, where they learnt to grow their own food in spaces ranging from as little as 6 sqft to as much as 6,000 sqft.

This 27-year-old Chhattisgarh girl quit her well-paying engineering job to seek a future in farming. Having completed her Mtech in the field of Computer Science, Vallari Chandrakar landed a job as an assistant professor in a college. However, she quit her job and started farming on 27 acres of land. Now, the vegetables grown on the farm are ready to be exported to other countries such as Dubai and Israel.

Vallari’s journey in farming began in 2016, and she gradually went on to make a market for technology in farming. The vegetables grown on Vallari’s farm are sold to multiple cities across India, such as Indore, Nagpur, Bengaluru, and Delhi.

She learned new techniques in farming from the internet and picked up the local language as well to communicate with villagers effectively. She also conducts workshops on new agricultural techniques for farmers working on the land.

Suresh Babu, a software engineer, gave up his job in Australia along with the citizenship of that country, to be a farmer back home.

Suresh, who comes from a family of farmers, felt that his life in Australia was neither making him happy nor giving him any satisfaction, and he decided to return home. He had to spend Rs 15 lakh to make his land cultivable as it had been lying barren for more than a decade.

He started by plating 5,000 areca nut and coconut trees. In the four years since then, he has gained the trust and support of not just his family but others too. From not knowing the basics of farming, he has come to a stage where everyone approaches him with their doubts and queries.

After waiting patiently for a long time for electricity, Suresh now uses solar energy for the fence and irrigation. For his love for farming and his innovative approach to agriculture, a sector that most people are giving up on, he has been felicitated with Young Achiever and Young Progressive Farmer awards.