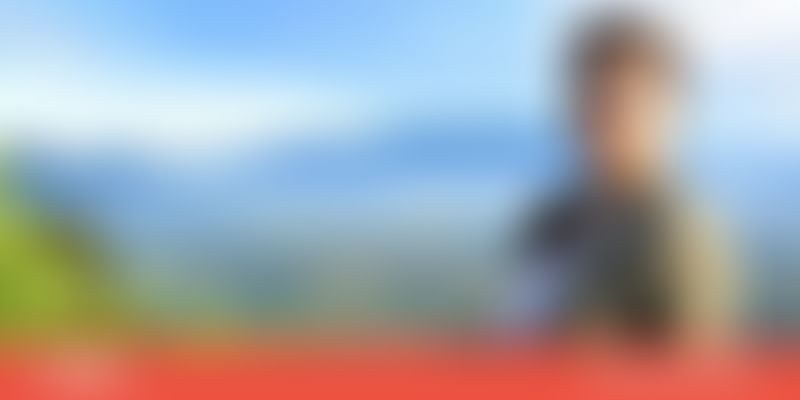 Starting as a journalist at different media houses in Hyderabad, Tejaswini Pagadala chronicled the life and journey of Nara Chandrababu Naidu, the Chief Minister of Andhra Pradesh, to become India's youngest political biographer.

"I wanted to prove that not just grey-haired people can write biographies but young people also can. It is about experiences and knowledge, not age and wisdom," 27-year-old Tejaswini discerns as she narrates how she chronicled the life story of the Chief Minister of Andhra Pradesh, N. Chandrababu Naidu.

After around 18 months of research and exploration, Tejaswini sat down for seven months to write the CM's story which was released last month in January 2018, as India's Glocal Leader: Chandrababu Naidu.

When Tejaswini was just in primary school, she became interested in politics and topical issues. As her family gathered every night for dinner, Tejaswini was often questioned on current affairs by her father. These conversations grew into something substantial as she started picking up the newspapers and made it a habit to read them daily, from a very young age.

Tejaswini’s growing interest in national politics propelled her towards a BA in Mass Communications from Loyola Academy, Hyderabad, and during this time, she also freelanced for The Hindu's Young World and the Sunday Magazine. Later on, she did a post-graduation diploma in print journalism from Indian Institute of Journalism and New Media, Bangalore, where she specialised in political and development reporting.

"This was when I realised I was utterly passionate about journalism. I figured that this was what I wanted. I was even given an award in college for best development reporting."

A career in journalism

After college, Tejaswini worked for The New Indian Express, Hyderabad, and then for Deccan Chronicle. During her off days, she used to freelance for a few websites on human rights, sex workers, and child marriages.

Her work won her a few awards such as the ‘Laadli Media Award’ for gender sensitivity. Besides, she was the only fellow shortlisted for Asmitha Media Fellowship in 2012-13 for her article on child marriages.

After her stint at Deccan Chronicle, she started to freelance for Al Jazeera and Yahoo News. Around this time, she assisted an international journalist who was documenting the similarities between Narendra Modi and Chandrababu Naidu with regard to their visions and leadership qualities. It was a week after elections, when Tejaswini met Naidu for the first time for an interview. His party had won the elections in the state and Naidu had been appointed the Chief Minister.

The interview led to an analytical piece on what lied ahead for the Chief Minister for his term, while she also published an article on farmer loan waivers for Al Jazeera.

Tejaswini was gradually getting known for her work across the journalist circles; a senior journalist friend of hers notified her of an opportunity at the Chief Minister's Office (CMO), which required her to monitor all the social media handles of the CM. The role later evolved into that of a full-time communications officer.

Talking about her expectations, Tejaswini said,

"I was confused because it could end my career in journalism. I still trusted my gut and joined the office in a couple of days. Since the Chief Minister's office is a confidential working space, it took me some time to gain the trust of my superiors. Writing government's publications, CM's letters, policy research were all part of my role."

Once she settled in, she spent 12-13 hours every day with Chandrababu Naidu at the CMO, documenting the marathon of meetings. She started to notice little the things. She was fascinated by his attention to detail — his memory power, his knowledge of what was happening in the state, and how he had every bit information from every nook and corner on his fingertips. He spotted mismatches in meetings quickly, in terms of growth and numbers.

Apart from the vision he had for the state, Tejaswini says he was quite a craftsman in implementation.

When asked about how she decided to go ahead with the book, she quips,

"For all I have learnt about his personality at the closest level possible, I asked myself: why not?"

In December 2015, she quit the CMO to work on the biography. In February 2016, she started writing the book. In the meantime, she visited Naravaripalle, Naidu’s native village where she met his old college friends, relatives, and his sister. These interactions helped her discover his childhood — she realised how his early years were reflected in his present ideology, as a businessman and a leader. Such was Tejaswini's resolve to bring the book to reality.

Affirming on history and its significance, Tejaswini said,

"Preserving history is underrated in India, we do not understand its importance. This biography was an attempt to negate that. I wanted to make a point that we need leaders like him and we need them now, considering everything is progressing at a rapid pace. He thinks like a businessman but acts like a politician."

"For a country like India which is very reluctant to try new things, Chandrababu Naidu has been proactive and welcoming to new ideas. I would know what was on his mind, I would know how he would respond to a specific situation. That was an advantage. That helped me write his speeches. That's the closest I got to him," she said.

She got in touch with his previous cabinet, his previous secretaries and his close associates, who became strong sources for her book. She also wrote about his downfalls, his mistakes, and how they affected him personally and politically.

While finding the right publisher is usually the biggest challenge for any author, it was funny how she got hold of Bloomsbury. She recalls,

"I wrote to Bloomsbury and they responded back in 20 minutes. They saw my contact number on the mail and called me back saying they had actually been looking for a script on Chandrababu Naidu."

They signed the agreement in a week and the book was released in January 2018. A total of 4,000 first-print copies went out, and Tejaswini’s book is reportedly in great demand now. She remarks,

"It's pretty good sales wise. It's on the bestsellers."

While she could not receive Chandrababu’s direct feedback, she met his staff who told her that he was really happy with the book. All this time, she kept hoping that the book doesn’t get controversial and bring any harm to him. Since they trusted her as a credible source, none of the party members had a problem with her writing the book. However, she exerts that it was a huge responsibility — she was chronicling a chief minister's journey, that too someone in power.

When asked if she would consider this as a career choice, she said that the idea behind the project was not making money. "I was clueless about how to write a non-fiction political biography. First book is meant to build your brand, not make money. That was my original intention,” she said.

"Research took a lot of time. I had to get the facts right. I had to cater to all sets of audience. I was skeptical that people would call me a fangirl for writing this. So, I ensured I was as neutral and as objective as possible.

Speaking of the process of writing, she shares, "You reach the final chapter of your book and you eventually hate your first chapter. The last chapter turns out to be the best and the first the worst. But the first one has to be the best, even from a marketing point of view. I was exhausted, mentally and physically. I had a huge writer's block at times, for a couple of weeks together."

Now she hopes that her book inspires and encourages more people to write biographies. And it doesn't have to be just the old people. "Writing an article as a journalist is one thing and writing a biography is different. It was important for me to document the whole process, while thinking of the bigger picture ahead," she says.

Being a first-time author came with great deal of multitasking. Tejaswini had no help from the government or from the party. Nevertheless, she made the best use of social media to promote her book and she is glad that it is paying off.

"The publisher will do his thing to promote the book better, but it's on you as an author to ensure your work reaches out. Though local media hasn't covered it so much, social media sure is helping me market the book," she opines with confidence.

When asked if she would want to be a full-time author in the future, she says yes.

"But I would love to write columns along with it. I haven't really figured it out yet, but for now, I just want more people to read my book."