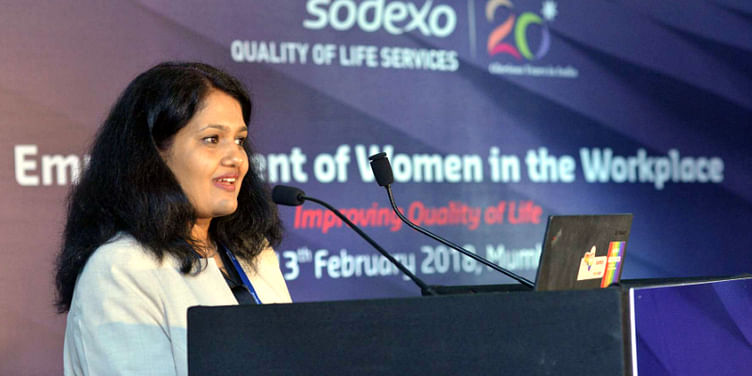 Wonder why women get stuck at the bottom? They experience these six phenomena at work every day.

When Shachi Irde, the Executive Director of Catalyst India WRC, saw that companies were willing to pay fines rather than identifying women to fill the mandate imposed by the Companies Act making it compulsory for all listed companies in India to have one woman on their boards, she knew that the conversation that had been started a century ago and that Catalyst joined 55 years ago, may have reached a stagnation point.

In the talk delivered by Shachi Irde, she illustrated that while there had been policy changes, zero accountability measures ensured that these policy level changes remained on paper. We will remain stuck in limbo, she said, if the following phenomena are not understood, and the steps enlisted below are not put into effect on an immediate basis.

There’s a myth, that all good leaders are men

“Deep down, people still don't believe that women are as good leaders as men. Men and their personality type are seen as the default when it comes to leadership.”

The persistent stereotype is that men take charge, women take care – putting women on a double-mine, of sorts. Women are unfairly judged as either too hard or too soft, but never just right.

Women experience daily micro-aggression after micro-aggression, that sends the message that they don’t belong. Not calling them to meetings, cutting them off, excluding them from social situations, deterring them from networking, sexist jokes, presumptions etc. are all part of a woman’s routine, and too many women give up as a result of the crippling emotional tax they have to pay. They always have to be on guard - trying to navigate sexism or discrimination. For instance, a woman had pointed out that she would not wear sleeveless clothes because her boss would watch her all the time, and it made her terribly uncomfortable. It is a heavy price to pay to hold your spot in the social and professional space and takes a toll.

Glass ceiling – sticky floor. Why women tend to remain at the same level.

Men are judged on potential while women are judged on total performance. Women constantly have to showcase performance as well as potential, but when it comes to men, their potential is enough. On top of this, women are subjected to extra scrutiny about their likeability. Eighty percent of women CEOs are internal candidates – according to a study conducted by Catalysts on Fortune 500 companies - further alluding to the observation about performance-based promotions.

Not enough men are stepping up to sponsor women

Sponsorship is more important than mentorship. A mentor talks to you, a sponsor talks about you, champions you. Since women are judged by their past performance, having a sponsor is a strong comment on her credibility.

Women are offered fewer high visibility roles, mission-critical roles or international jobs - or the “hot jobs,” so to speak. Stereotypes surface, like “she has young kids,” “she wouldn't want an international role,” “she will not be comfortable with the long hours”, etc. If they aren't offered challenging roles first, which are critical to establishing one’s competence for the C-suite, they will never truly lead.

The lack of role models

Women are stuck on the wrong side of the glass ceiling and are held back from advancing to the top. Thus, with fewer role models to aspire to, women at the lower levels do not muster the confidence to be ambitious and break the glass ceiling. You can't be what you can't even see, after all.

Be an inclusive leader

Diversity is a fact, inclusion is a choice. It must be inherent. Inclusive leaders know how to truly draw on the talent of people from all backgrounds, leverage their uniqueness in perspective, while fostering a sense of belonging and helping them fit in, at the same time. It helps the employees feel valued, and their irreplaceable perspectives. Moreover, it takes every employee to create a truly inclusive workplace – and everyone must be sensitised to actively unlearn their biases to embrace people from all walks of life. Everyone must speak up against exclusionary behaviours that they witness or hear of.

In fact, incentivising inclusive leadership is a strategy that has also been proven to be effective. Various companies have included a variable component in the bonuses of their C-suite employees for contributing towards achieving the companies diversity targets.

Lastly, close the wage gap - in India, we don't talk about this enough. Basic research will tell you that it is pegged between 20 and 60 percent, and needs to be closed on an urgent basis.

This is a practice that is required for everyone who has a life beyond office – not just women. The young, as well as the old, could benefit from flexible work arrangements, working from home provisions in order to build a life that is truly worthwhile. Valuing an employee’s productivity over their physical presence is key.

Engage the men. Men run 95 percent of the world’s most powerful companies. They must champion women. In conclaves surrounding diversity and inclusion, in a company’s internal exercises, including the men, make them feel accountable, and help them understand how they can be allies as well. Make it everyone's problem to solve, not just a niche that affects only one half of the world.