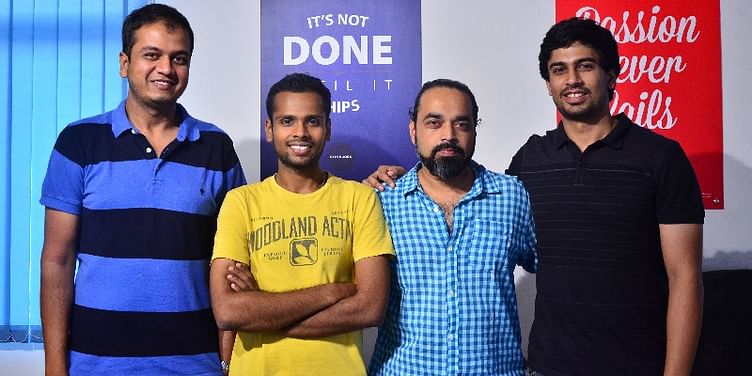 From kaleidoscopes and periscopes to imparting IOT-driven knowledge, Smartivity is getting children excited about the future of connected technology and science.

What do they do: Degisn and sell toys based on concepts such as IoT, Robotics and AI

There has been a renewed interest in getting people up to speed in mathematics and the sciences the world over. A McKinsey study says there will be close to 490,000 data science jobs available this year, but only 200,000 jobs can be filled because there aren't enough skilled talent out there.

Even scientists complain there isn’t a large enough pool of students opting for pure sciences. One of the reasons could be that there isn’t adequate interest created in science, technology, engineering and mathematics (STEM) education at home and school.

Sensing a potential business opportunity, Tushar A Amin, Ashwini Kumar, Apoorv Gupta and Rajat Jain set out to explore to fill the gap in early STEM education in India. Their startup, Smartivity, based in New Delhi, is dedicated to designing, producing and selling innovative STEM and art-based educational activities and toys.

The company wants to bridge the physical and digital worlds to deliver 'smarter learning' to children who are of the ages three through 14 across the world. Its portfolio includes physical STEM educational do-it-yourself kits, toys and activities that integrate cutting-edge technologies like augmented reality (AR), virtual reality (VR), robotics and IoT to make learning playful and fun.

Ashwini, Apoorv and Rajat, all in their late-twenties, graduated from IIT-Delhi in 2011. Tushar studied BTech at Laxminarayan Institute of Technology in 1997, and followed his graduation with a Master’s in Communication and Journalism from Pune University in 1999. Tushar heads the marketing, strategy, technology product design and creative functions at Smartivity. Ashwini heads the business division, while Apoorv leads operations and finance and Rajat is in-charge of product design.

The idea for Smartivity was sparked, fittingly, at a child’s birthday party in early 2015. Tushar and Apoorv got talking about how science toys could make children learn concepts quickly. Apoorv took the idea to former classmates Ashwini and Rajat, who were instantly interested. Having worked in the toys industry for several years, Tushar knew that there was not much developed to grab and hold on to a child’s attention, and he was able to convince the others.

All of them were working, but yearning to get out of corporate life and build something on their own. Apoorv was at Deloitte, while Ashwini was working at Energo and both wished to become entrepreneurs. Rajat’s family was in the business of importing toys, while Tushar had experience in the industry. So it all came together beautifully and Smartivity was launched in January 2015.

“The four of us were convinced about the need for understanding practical applications of STEM concepts, especially given the heavy emphasis on rote learning in our educational system. We wanted to provide children with something that they not only can play with but also make on their own and understand the working of through experience,” says Tushar.

Their mission is to encourage the next generation of innovators, tinkerers, creators and makers of the future.

In the first year, Smartivity grew out of the living room of Apoorv and Ashwini's flat. Over the course of the next two years, they moved to a small warehouse and then to a facility in Manesar as their sales were nearing $2 million.

The startup began with its core range of physical STEM educational DIY toys. They developed a colour and texture-recognition algorithm that is embedded in toys’ digital displays, which children could use. In that process, in December 2015, Smartivity launched AR-enabled colouring sets and jigsaw puzzles in India.

“Through these products, our goal was to redefine the traditional activities that children love to indulge in for the modern age. Colouring books and jigsaw puzzles also make for a sizeable chunk of the toy industry. This gave us an edge in the industry. Today, our AR products are part of the curriculum at one of Asia's largest preschool chains,” says Tushar.

Currently, the team has 55 members with product designers, technologists, creative designers blending technologies like virtual reality, robotics and IoT in toys to help children learn in a smarter and more fun way.

At the conceptual stage, Smartivity considered a digital subscription-based model. However, after conducting on-ground research and crunching numbers, the founders came to a conclusion that they had to choose between either spending the money on customer acquisition through online advertising or channeling all their resources into creating products. They chose the latter.

The company founders bootstrapped Smartivity with Rs 1 crore. Design was its strength, and hence the startup spent money on designing and building a superlative product portfolio. Initially, retailers refused to stock Smartivity products. A few supportive local toy stores in Delhi, however, allowed the startup to stock products provided the founders stood at the store and sold the products themselves, and also share the revenue with them.

However, this bet paid off in 2016. Parents saw real value in what they had built and soon retailers started stocking their products. For increasing brand awareness, the four members began conducting STEM workshops in partnership with malls and activity centres. These initiatives also paid off and, today, their toys are available in 800 toy stores across the country (both in large chains like Hamleys, Landmark, and Crossword, as well as traditional mom-and-pop toy shops).

The company outsources the manufacture of toys and their capacity is over 2,000 toys a day. Their toys are certified to ensure the paint or the parts used are not toxic to children. The Commerce Ministry of India revised the policy conditions for toy imports on September 1, 2017, and said inbound shipments of toys would be allowed freely when accompanied with safety certificates.

Smartivity conforms to all the standards, the company says, and is manufacturing locally.

The education component of the toys and sets piqued the interest of schools, which were interested in kaleidoscopes, hydraulic pump sets, simulated rockets and periscopes.

Smartivity has partnered with five preschool chains and schools as a vendor. A key development happened in 2017 when it showcased its portfolio at Spielwarenmesse, the world's biggest annual toy fair, in Nuremberg, Germany.

“Our unique and innovative products found ready buyers in the most discerning toy markets like the US, Canada, Europe and Australia. Last year, we started exporting to these countries and we are expecting to open Western Europe, Japan, Russia and South America markets in the coming months. Currently, our business model is built around retail stores and chains, preschools and schools in India, and in exports as the three sales channels,” says Tushar.

The global market for STEM educational toys is valued at $29 billion and is expected to grow to $35 billion by 2020. Of this, India accounts for about $235 million, and is expected to grow to $500 million by 2020. STEM is also one of the few categories of the toy industry that has shown consistent growth over the past five years, and this growth is expected to be faster over the coming years, as parents across the world are increasingly becoming aware of the value of STEM learning in a technology-driven future.

One of the key challenges in India is the unorganised nature of the market. With the announcement of recent decisions like GST and mandatory safety certification requirement for toys, this picture is expected to improve in favour of Smartivity, as these moves will discourage dumping of cheap and non-certified imported toys in the market.

“Since we are integrating bleeding-edge technologies like augmented reality, virtual reality, computer vision and adaptive learning, another challenge we face is the lack of awareness about these technologies. However, our approach of experiential and demo-driven awareness building has given us great results,” says Tushar.

Their goal is to keep introducing unique, learning-based and engaging products that digital-native children would love and discerning parents trust. They plan to launch new products every quarter, and their core focus will be on developing innovative products. “We have to think at least two years ahead, just to maintain the same level of innovativeness,” Tushar says.

Smartivity considers global giant Lego its competition as it targets the same group of children. But the differentiator, Tushar explains, is that while Lego's products are mostly static projects, every Smartivity product translates into a dynamic STEM principle-based game or activity that a child can learn from and play with.

To beat global competition, Smartivity has launched the STEMNINJA Initiative, which is a loyalty programme for its patrons to design STEM toys. Through the STEMNINJA Initiative, the startup is giving these children an exclusive access to future products, and making them integral to the company’s continuous design process. It is also betting on the sales from the website to increase.

Smartivity is betting heavily on AR and VR education for its products. For example, topics like ‘structure of a cell’ or ‘solar system’ are tackled using VR experiences. “You do not just read about the animal cell; you actually walk through the cell and explore its different components. Coupled with interactive elements and assessment exercises, this ensures that a child with a smartphone (which is ubiquitous) in any place can have as good an understanding of a concept as the one in an expensive school,” says Tushar.

Incorporating VR into the toys not only helps in understanding a concept but also takes away the fear of learning from the child, and in turn ensures that she is inspired to aspire for bigger things. Smartivity is after making our kids take to sciences, and hopefully, in a decade, we will see some of them working on cutting-edge technologies.