Customer is the key to success: Jeff Bezos in annual letter to shareholders 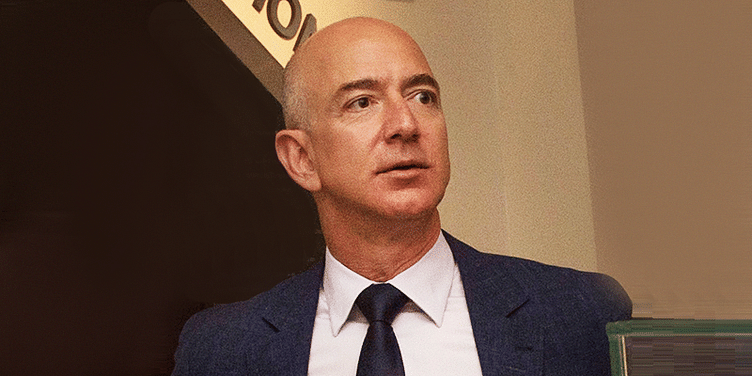 Amazon was started by Jeff Bezos in 1996 from a garage, and today is one of the most valued companies globally, with 560,000 employees.

In his annual letter to the company’s shareholders, Jeff talks about the milestones the company has achieved in the past year and how it continues to strive to grow and make an impact. In his letter, Jeff wrote, “Since 2011, we have invested over $150 billion worldwide in our fulfilment networks, transportation capabilities, and technology infrastructure, including AWS data centres. Amazon has created over 1.7 million direct and indirect jobs around the world. In 2017 alone, we directly created more than 130,000 new Amazon jobs, not including acquisitions, bringing our global employee base to over 560,000. Our new jobs cover a wide range of professions, from artificial intelligence scientists to packaging specialists to fulfilment centre associates. In addition to these direct hires, we estimate that Amazon Marketplace has created 900,000 more jobs worldwide and that Amazon’s investments have created an additional 260,000 jobs in areas like construction, logistics, and other professional services.”

The letter also lists out the big wins and major achievements of the company with an overall report card for the shareholders. Here are some of the key things that Jeff highlights in his letter:

Two of the biggest things to emerge out of Amazon’s kitty this financial year were Amazon Go and the acquisition of Whole Foods. Amazon Go is a no-checkout store that opened to the public in January.

“Since opening, we’ve been thrilled to hear many customers refer to their shopping experience as ‘magical’. What makes the magic possible is a custom-built combination of computer vision, sensor fusion, and deep learning, which come together to create Just Walk Out shopping. With JWO, customers are able to grab their favourite breakfast, lunch, dinner, snack, and grocery essentials more conveniently than ever before.”

Jeff revealed that some of the most-loved items other than caffeinated beverages and water were Chicken Banh Mi sandwich, chocolate chip cookies, cut fruit, gummy bears, and Amazon Meal Kits.

The other major feather in Amazon’s cap was the acquisition of Whole Foods Market, an American supermarket chain that specialises in organic and additive-free foods. Prime members had the opportunity to get free delivery for two hours in a day in select cities. “We’ve also begun the technical work needed to recognize Prime members at the point of sale and look forward to offering more Prime benefits to Whole Foods shoppers once that work is completed,” added Jeff.

Among a variety of benefits and deals, Amazon Prime gives customers access to e-books, music, and streaming videos for a monthly or annual subscription.

Jeff’s letter reveals that Prime has exceeded 100 million paid members globally, 13 years after its launch. With Prime worldwide, Amazon shipped more than five billion items while expanding into new countries such as Mexico, Singapore, Luxembourg, and the Netherlands. Prime is now available in 50 cities worldwide across nine countries. Germany and the United States saw the introduction of Business Prime Shipping which combines fast delivery for a multi-user base.

Jeff also revealed that Prime Day 2017 was their biggest global shopping event ever, as it saw more new Prime members participate than ever before in the history of Amazon.

As far as Prime Video is concerned, Jeff revealed that Prime Video Direct secured subscription video rights to 3,000 feature films and “committed over $18 million in royalties to independent filmmakers and other rights holders”.

Meanwhile, Netflix, one of the primary competitors of Prime Video, had the most successful financial quarter in its 20-year history, buoyed by skyrocketing subscriber figures and an increase in subscription prices in late 2017.

In his letter to the shareholders, Jeff revealed that AWS was making a $20 billion revenue run rate. While it’s grown and expanded over the years, AWS is now looking to leverage new technology like AI, IoT, and Machine Learning to innovate and grow. Last year the company announced 1,400 services and features. Jeff also specifically mentioned Amazon SageMaker, which “radically changes the accessibility and ease of use for everyday developers to build sophisticated machine learning models”.

In 2017, over 300,000 more US-based SMBs joined Amazon as sellers and started using the marketplace to sell their products. Another interesting tidbit that Jeff shared was that on Prime Day 2017, 40 million items were ordered worldwide from SMBs by customers. This increased the sales of these small businesses by almost 60 percent.

Amazon’s virtual assistant Alexa was used in Amazon Echo and Amazon Echo Dot smart speakers, developed by Amazon. Customers can now control more than 4,000 smart home devices from 1,200 unique brands with Alexa. 2017 was also a good year for hardware sales – Jeff mentioned that millions of Echo devices, Fire TV sticks with Alexa, and other similar products were sold. In 2017 Amazon also celebrated the 10th Anniversary of the Kindle, an e-reader marketed and developed by Amazon.

Fashion was big for Amazon in 2017. Jeff writes, “In 2017, we introduced our first fashion-oriented Prime benefit, Prime Wardrobe – a new service that brings the fitting room directly to the homes of Prime members so they can try on the latest styles before they buy. We’re also continuing to enable thousands of designers and artists to offer their exclusive designs and prints on demand through Merch by Amazon.”

Jeff dedicated a special mention about Amazon in India, calling Amazon.in the fastest growing marketplace in the country. comScore and SimilarWeb have dubbed it the “most visited site in India” on both mobile and desktop and according to App Annie, it is the most downloaded app in India.

While Jeff pointed out all this, he also shared more details, “Prime added more members in India in its first year than any previous geography in Amazon’s history. Prime selection in India now includes more than 40 million local products from third-party sellers, and Prime Video is investing in Indian original video content in a big way, including two recent premiers and over a dozen new shows in production.”

Jeff signs off his letter with a big thank-you and a copy of the first letter he wrote in 1997 as a reminder that every day is Day 1 at Amazon. He writes, “A huge thank you to each and every customer for allowing us to serve you, to our shareowners for your support, and to Amazonians everywhere for your ingenuity, your passion, and your high standards.”