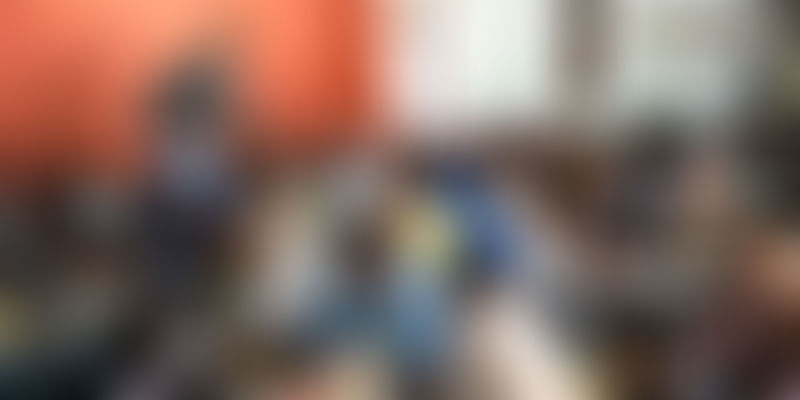 During a workshop at Khamir, near Bhuj, Amazon India reveals the ways it is gaining the trust of rural artisans and helping them sell online.

At the sprawling Khamir campus, about 15 kilometres from Bhuj, the spirit of optimism and curiosity overpowered anxiety, and the sense of promise trumped uncertainty, as 50-odd handloom and handicraft artisans from Kutchi villages gathered to potentially make a paradigm shift in the way they did business – with Amazon India playing pied piper to their closeted ambitions.

“Gujarat has two crore internet users. Will those many people ever visit your store in Kutch? A majority of Amazon’s sellers are based in Tier-II and III cities, rather than larger metros. We even have tribal artisans who have moved to online selling. And you Kutchhis are much more advanced - you use the internet, WhatsApp, Facebook, have PAN and Aadhaar cards. Why are you lagging behind?”

This was Amazon’s call to action to the iPhone-wielding Kutchi artisans, who had paradoxically resisted when it came to letting the digital storm permeate their professions and truly make a difference to their lifestyles.

With an aim to get every artisan on the worldwide web in order to ensure their crafts get the necessary audience and appreciation, Amazon India is employing the following six strategies to gain their trust:

Amazon India’s way of demystifying an intangible internet giant is by providing exactly what was missing – a touchable, approachable entity – a face, if you will. Amazon goes a step further and deploys foot soldiers in every single cluster – which is just Amazon-speak for ‘region’ - they have identified.

Viraj Thakkar, Sales Executive at Prione (which is Amazon’s JV partner to enable Indian small and medium businesses (SMBs), and offers their cluster enablement services to Amazon’s Kala Haat program) is the face of Amazon in Kutch. Stationed there since September 2017, since much before the seminars, his job as a liaison entails on-boarding artisans as sellers on Amazon.in, in a way that safeguards the interests of both parties.

But the beauty of this role – his role – lies in his attention to detail. His camouflage is airtight – dressed in a hand-woven khadi ikat shirt, he is on a first-name basis with most artisans in the region. He speaks the vernacular of the region – so much so that he could fill in for any of the sales people at their retail studios, answer questions about the origins of the fabrics, the printing and production techniques, and rattle off the contents of every shelf. By truly understanding their crafts and appreciating their heritage and history, he has ensured that the artisans see him as one of their own. Furthermore, by speaking for the artisans at the conference, he proves his allegiance.

Breaking the fourth wall, and coming face to face with artisans

While this was not necessarily the case with Kutchhi artisans - all of whom had email accounts - many of the artisans from other clusters were internet debutants. Therefore, as part of their “Kalahaat” initiative, Amazon India decided to tour the country to directly communicate with local artisans – to ease their doubts and fears about entering the online space, and more importantly, speak about the world of opportunities that lies on the other side of that screen, through workshops. They have reached 11 Indian states so far.

As for the workshop conducted at Khamir, the 50 artisans in attendance sat through a presentation detailing how to go on-board and sell products online, fetch an appropriate price for their one-of-a-kind hand-crafted products - in their case, everything from bags to keepsakes and apparel, market one’s products online, the extent of Amazon’s network, the seller support they offer, how to maximise their reach to Amazon’s vast audiences, and logistics. The presentation encompassed every what-if possible, visibly pacifying traditionalists.

In the Q&A that followed, the artisans voiced several other concerns – about the requirement of a GSTin for Amazon, if they were eligible for an exemption, what percentage of revenues goes to Amazon, how product listings and photoshoots need to be conducted, if internet training and education can be provided to artisans who are not yet internet users, etc.

They were, in turn, informed that they only needed four things to become sellers – the artisan ID card, access to the internet, a bank account, a PAN or GST Number. Furthermore, et on that while Amazon charges a 17 percent cut, because they were working with the government, anyone with a valid artisan card proving their artisan status, would only be charged 8 percent.

Madhavi Kochar, the Head PR for Seller Services at Amazon India, said: “We're not looking at this as something that earns us money. How much money we earn out of this is not important right now; we just want to make it sustainable.”

From among the artisans who came to Bhuj for the workshops from nearby villages like Ajrakhpur and Dhamadka were also a few who had already made seller accounts on Amazon India, and had been running their online stores for a while. They included Dr. Ismael Mohamed Khatri, a world-renowned master of the traditional Ajrakh block printing process, a family run practice for the last 300 years and currently run by the eighth generation; and Abdul Gafur Khatri, the last surviving custodian of traditional Rogan Art. They attended the workshop to share their success stories and encourage more artisans to embrace ecommerce.

“Not only did my products sell extensively, and my name crop up on Amazon. Aapka maal bikega ya nahi bikega woh kismat ki baat hai, par aapka brand banega,” said Rizwan Khatri, another Rogan artisan, who is also an Amazon Seller, to the inquisitive crowd that sought reassurance from one of their own. “When I got my first order, I got an SMS as well as an email. However, I didn't have what they had ordered in stock. But I could communicate with the buyer, and sold him another painting from my stock instead. I even received the payment from Amazon in five days, instead of seven,” he added.

“Have you wondered how your products will be visible amongst three crore products?” We've created a separate page for handlooms - which has another special section, “Crafts of Kutch,” says Aditya.

All products listed by artisans and weavers are available through the ‘Handloom & Handicraft’ store on Amazon.in. Launched in 2016, the store aims at bringing the rich Indian heritage of handicrafts and handlooms - across categories such as sarees, jewelry, handbags, shoes, and more- to Indian consumers’ doorsteps.

“We will make sure that your products are at par with Fab India - so an Amin, or an Ismail are the same as Fab India on Amazon,” says Aditya, adding, “And with all your products, we have added an elaborate description about how it is made, and what the story is behind each product.”

Some other nuances are also incorporated into the listings. For example, the charm of some products like bandhani lies in the fact that it is delivered tightly twisted and bundled up, and is to be opened and either draped in that crimped state or ironed out by the wearer. An open piece cannot be sold again, and, hence, cannot be taken back. The listings of all such products state that the item is not returnable.

Working with NGOs and quasi-governmental bodies they already trust

Amazon.in partnered with local NGOs like Kharmir and Shrujan - that strive to grant better access to artisans –to tap into their extensive network and expertise.

And yet, some of the no-nonsense, frank questions that the founders of the two NGOs directed at Amazon during the event - “How will you promote Kutchi art specifically?” “How will you create awareness that Amazon is doing handlooms?” “Why can’t a new handlooms tab be incorporated into Amazon’s home page itself? – reassured the artisans that they had their best interests at heart first, and that of their corporate partner, Amazon later.

Amazon has also established strategic tie-ups with government bodies like DC Handlooms and Gujarat Tribal Development Department, to onboard over 1,100 weavers, cooperatives, and artisans in 11 states through 35 workshops so far, impacting more than 1.5 lakh weaver and artisan households.

Working with their respective governments, Amazon has joined hands with APCO and Lepakshi in In Telangana, Tantuja, Jute Corporation of India and Boyanika in West Bengal and Orissa, Cauvery Handlooms and Loomworld in Karnataka and Tamil Nadu, and even worked with central government agencies like TRIFED & Craft Cottage Industries Corporation to enable UP Khadi and Handlooms to enable khadi societies in the state of Uttar Pradesh.

Handholding them through the journey from offline to online

Understanding that the most daunting bit for artisans is the specifics, the “how” of things, Amazon detailed a step-by-step process on what it takes to create product listings, and start a store. They offered to provide various services such as cataloging, imaging, technical guidance, and support – even stating that they would do the photoshoot of the artisans’ first 40 products free of cost, immediately after the workshop, in order to demystify the process further.

Launching other logistical services that would help make the transition even smoother for first-timers, Amazon.in has various initiatives and offerings, from Fulfilment By Amazon (a pay-as-you-go fulfilment service wherein Amazon.in packs, ships, and delivers products to customers, manages returns, and does customer service on behalf of the sellers), to innovating Easy Ship (an assisted shipping service that makes it easy for sellers to ship products across India), launching Seller Flex (bringing Amazon’s flagship FBA experience to the seller’s doorstep by implementing the FBA technology at sellers’ warehouses). The Global Selling Programme helps Indian businesses to transcend geographical boundaries and take their authentic regional selection to buyers all over the world. The retail giant is also building the largest storage capacity in ecommerce in India for sellers.