It’s 2018 and we still see gender disparity in sports, says the man behind Female Cricket 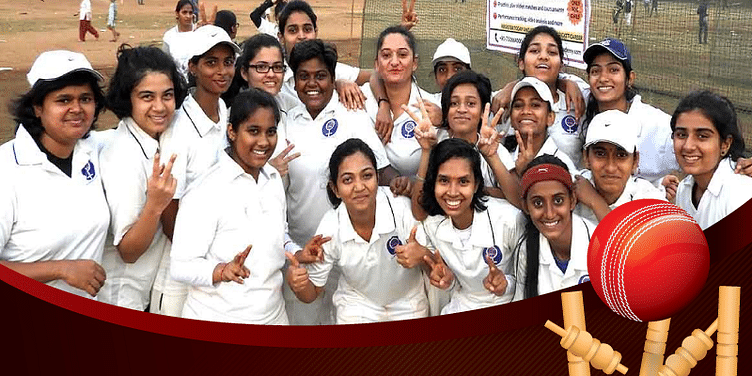 Vishal Yadav, the Founder of Female Cricket, is the man on a mission: to make sure that women in cricket get their due and more.

On May 22, 2018, during the IPL first qualifier between Chennai Super Kings and Sunrisers Hyderabad, Hotstar, a digital and mobile entertainment platform, recorded 8.26 million concurrent viewers, a global record for any live event streamed online.

It’s not very surprising to see the euphoria, love and attention IPL garners, but it is still very much a gentleman’s game. “It’s 2018, but it’s sad that we still see gender disparity in the sport,” says Vishal Yadav, Founder of Female Cricket, a platform dedicated to women cricketers with an ever-growing community of over 1,00,000 female cricket enthusiasts.

With his corporate day job, Vishal devotes his weekends to Female Cricket.

What started as a platform to closely follow women cricketers and their stories, has now led to a Cricket Academy in Mumbai to get more women to chase their cricket dreams.

YourStory finds out from Vishal what is keeping women away from the game, how do we change the narrative of women’s contribution to cricket, and what drives him to invest his time and passion to the cause. Edited excerpts:

Getting on the field

Putting his finger on the pain point, Vishal says: “Parents often discourage their daughters from taking up the sport. But it has changed now, thanks to Women’s Cricket World Cup last year. Till today, not all women cricket matches are televised. On the other hand, you will see domestic men’s tournament being aired on a major sports channel. This lack of television or screen time has done more harm than anything else to this game. The problem is female cricketers are neither discussed nor celebrated while they are putting in equal efforts. They have inspiring stories to share, and deserve equal love and appreciation as their male counterparts.”

Started with the aim to talk and promote women’s cricket 24X7 and 365 days in and around the world, Vishal and his team has put out reports, stories and everything under the sun about women cricket players to build a community, and in the process have inspired many young talents to pursue and nurture their cricketing dreams.

“Within just two months of starting Female Cricket, we realised its true potential and that there was a strong need for such platform. Our community started responding to this initiative, which further boosted our belief in the idea,” says Vishal. Congratulatory messages started coming in from players, coaches and officials, and slowly the word spread.

Gearing up to play

From just covering to documenting stories, Vishal realised there was a huge demand for content, and while it encouraged women to play, there were other challenges. Getting access to equipment and also the right environment and academies to play without gender bias, was a big challenge.

From small efforts of distributing cricket equipment to underprivileged kids across Mumbai, it eventually led to setting up of the cricket academy.

Launched in Mumbai, where Vishal is based, the Cricket Academy is exclusively for girls.

Soon after the success of our girls at World Cup 2017, we saw a revolutionary shift in the way women’s cricket was perceived in our country. Our emails and Facebook inbox were flooded with messages asking us for the process and procedures to get into the cricket team. It was amazing to see parents calling us and enquiring for the details. They were willing to let their daughters join cricket. But the challenge was lack of cricket clubs and academies that exclusively had sessions for girls. This gave us an idea of starting our own cricket academy. At the moment, we have 40 girls training at the academy.

It is, however, important to understand why we need exclusive female cricket academies. According to Vishal, there is no dearth of cricket academies in India. However, what is lacking is practice sessions for girls. Girls are therefore forced to choose clubs far from their place, which hampers their education and other important chores. “The condition is even worse in tier-II and tier-III cities, where access to these clubs become all the more difficult. Other challenges include lack of proper training and diet information for these girls,” shares Vishal.

There are more than 10 authors who contribute to the platform, and several authors and writers also volunteer as contributors. The volunteers mostly help to cover women’s cricket matches happening in and around the country.

When it comes to numbers and a huge community, Female Cricket has been a big hit. “Our Facebook page recently crossed 38,000+ likes, Twitter clocked 2,000+ followers, and Instagram touched 78,000+ followers. We also have a group on Facebook with 30,000+ active members reading and sharing female cricket news. Our traction is the testimony to the huge demand for women in cricket.”

The revenues come from the advertisements placed on the website, and YouTube videos, which is very minimal and doesn’t cover any costs. Their major revenue comes from the Cricket Academy itself. “We aren’t making any profits at the moment, but eventually will,” reveals Vishal. While they are self-funded at present, Female Cricket is open to partnership with like-minded organisations, which are passionate about the cause of women’s cricket.

Other than the Cricket Academy, two other major milestones for Female Cricket Academy has been the video documentary they made on Indian Railways women’s cricket team, which is led by India’s cricket Captain Mithali Raj, and the association with the Project Front Foot, a UK-based NGO, which along with Female Cricket, sponsors cricket equipments every year. “These cricket equipment are for the underprivileged kids in and around Mumbai, who hold passion towards the game, but cannot afford the costly gears. We have so far donated these cricket gears in five cricket clubs across Mumbai.”

Vishal shares that the BCCI (Board of Control for Cricket in India) has granted central contracts to national players, which covers their expenses and doesn’t burden them with financial constraints. However, there is negligible allowance for domestic players. Vishal elaborates,

To further add to the problem, the domestic female players do not get to play enough matches and tournaments, unlike our male cricketers. So, lack of money and lack of matches have become top two challenges for the professional cricketers.

However, the silver lining is the introduction of central contracts for national players, the increment in their annual contracts, and the number of matches played has definitely increased post the success of World Cup 2017.

The man behind Female Cricket

Vishal has a 9 to 5 job in the e-commerce space, and he eagerly waits for the weekends, which is when he gets to give his undivided attention to Female Cricket and the Female Cricket Academy.

“It feels great when I see messages from young cricketers thanking Female Cricket for inspiring them. This is the real achievement. Felicitation from the Maharashtra Government for our work, and the acknowledgement by the biggest and oldest cricket website, ESPN, has also been heartening,” he says.

“I also take pride in having successfully launched our first cricket academy exclusively for girls in Mumbai, and we aim to open more such branches in other cities of India,” he says. We wish Vishal great innings as he bats for women cricket.

And thanks to all the noise from Female Cricket and other supporters, in the next three years as the BCCI has announced, they may have the first-ever Women IPL. And while the T20 Asia Cup is underway, we wish the team, Vishal, and everyone who is working towards getting women cricketers their due right.