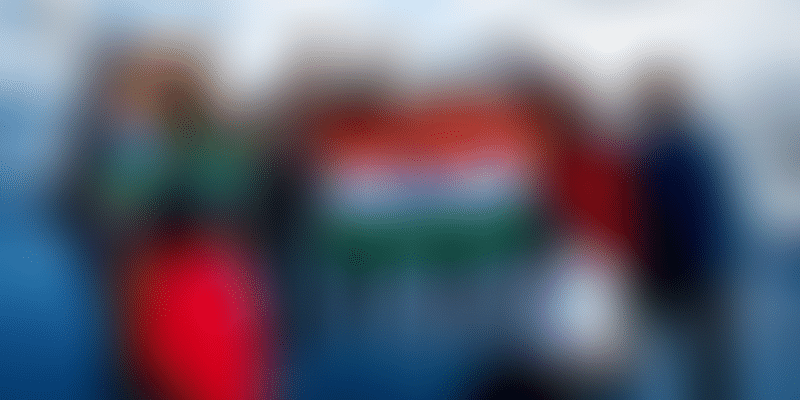 Three 26-year-olds from India were part of an expedition to Antarctica aimed at understanding the debilitating impact of climate change, in a world where our unsustainable practices are increasingly contributing to global warming.

Did you know that Antarctica is melting at a speed three times faster than a decade ago?

According to a recent study published in Nature, the melting of ice sheets in the continent has tripled since 2007, contributing to rising sea levels - a direct impact of global warming. The continent makes for a pressing case on the need to adopt sustainable practices, and there are many lessons it can teach you about the future of the planet.

In February this year, three 26-year-olds – Himani Singhal, Siddharth Maheshwari, and Rishabh Khandelwal – went on an expedition to Antarctica on a quest to understand the impact of climate change better. They were part of a 90-member team selected from over 18 countries.

The 90 people had one goal – to observe and learn from mistakes of the past.

“The pristine continent is one of the best teachers we have ever known. Antarctica reflects what the earth would have looked like years ago. It highlights the impact of human exploitation on habituated continents. It shows how mankind moved much faster than nature’s ability to refurbish it. The purest form of air, land and water accompanied with the peaceful sound of nature offers a platform to reassess our actions,” Himani explains.

Employees of Shell India, the trio was accompanied by David Hone, Shell Chief Climate Change Advisor, who was on his third voyage to Antarctica with ‘2041 Foundation’, a non-profit foundation that has been organising leadership expeditions to Antarctica since 2003. The aim is to engage with and inspire the next generation of climate leaders and energy champions who will work to build resilient communities by adopting renewable energy sources.

“I wanted to address the lack of empathy regarding climate change among the public, which is a result of lack of awareness. For a densely populated country like India, which is struggling her way out of basic living essentials such as food, water, shelter and sanitation, it is extremely critical for us to imbibe environmental consciousness in people’s everyday activities and learn from the mistakes of the West,” Rishab says.

The team underwent training prior to the expedition.

"This was one habit we practised religiously during our expedition. Since we didn’t own that place, we respected the continent and its biodiversity. We ensured we don’t harm or disturb any wildlife, leaving around no litter. We ensured even the outer layer clothes and shoes were disinfected to ensure no microorganisms are left behind," Rishab says.

"We took care to not walk on Antarctica moss as it would take hundreds of years for them to grow again. We ensured the place has no trace of our visit and remains as beautiful and mesmerising for the future explorers as it was for us. This taught us that if every human being conducts themselves responsibly and leaves every place the way they found it, we could easily win the war against climate change.”

The journey required the explorers to travel through Drake’s passage, the roughest stretch of water in the world, located between South America's Cape Horn and the South Shetland Islands of Antarctica.

“It successfully demonstrated that renewable energies can be developed for use anywhere — including remote and hostile environments,” Himani says.

In 1991, 53 nations signed the Madrid Protocol on Environmental Protection to the Antarctic Treaty, which imposed a 50-year ban on oil exploration and mining in Antarctica. Post 50 years, in 2041, the treaty will be renegotiated.

Hence Robert Swan, the first person to have walked to both the North and South Poles, founded the 2041 Foundation and dedicated his life to the preservation of Antarctica through the promotion of sustainability practices. The idea is to build a strong force of climate leaders to extend this moratorium beyond 2041.

The 2041 Foundation aims to realise the ambitions of the 2016 United Nations’ Paris Agreement to restrict global temperatures to two degrees C above pre-industrial levels. The foundation seeks to mobilise people to rally behind active solutions and lifestyle changes which create change for the present and the future.

Headquartered in Auburn, California, over the past 14 years, 2041 has inspired 3,500 alumni on 22 expeditions. 2041 aims to drive solutions within lifestyle, business and education sectors to encourage people to move towards a carbon-neutral future.

“We must focus on integrating usage of green and clean energy in our daily lives, following the practice of three Rs — reduce, reuse and recycle— carbon counting, propagating reforestation, and conservation of biodiversity,” Siddharth explains.

Through expeditions such as Shell’s Fuelling millennials, the 2041 Foundation sensitises various stakeholders including professionals, students, entrepreneurs and academicians on the impact human activities have on Antarctica, and its repercussions on the planet. They have also successfully established three e-base stations across the world that are working in the field of access to energy and education.

While initiatives from foundations like 2041 and cooperation from organisations like Shell are significant, it is important that all stakeholders, including governments, industry and entrepreneurs, come together and develop an innovative mix of cleaner energy solutions.

Energy is an essential part of our lives and as the global demand for this resource continues to rise there is a need to find clean alternatives to bring down the global carbon footprint.

"We need to integrate the three steps- integrate, restore and connect- in our lives. This includes integrating small solutions in everyday lives, ringing utility for green energy, putting solar panels on roof, practising reforestation and conservation, and cleaning plastics from oceans and beaches,” Himani concludes.