Nothing geeky about it: Meet the ex-Googlers whose Facebook filters have clocked 15M downloads 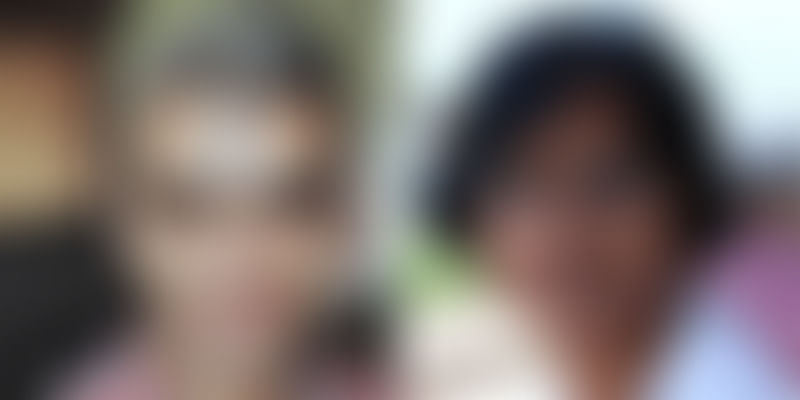 During a quick visit to Chennai last week, I had the privilege to meet a host of young entrepreneurs who had chosen to start up in the city – some have grown up here and find no need to head out, while others have wandered the globe and returned, or even chosen to make Chennai home.

One such entrepreneur duo working on augmented reality is Jai Ramamirtham and Pradnya Karbhari. Both have PhDs, but don’t use the Dr prefix. No matter what they say about the geekily quirky name of their startups, they are anything but geeky. Point105.AR is not only creating AR-based solutions, it’s also changing the way designers and enterprises change the way that AR works, moving everything to the cloud. Here are edited excerpts of the conversation.

Shradha: Point105-AR – that’s one of the most interesting names that I’ve heard in recent times. You’re into 3D Asset Management for augmented reality (AR). Now this sounds very exotic to me. Tell me more, Jai and Pradnya.

Jai: Point105-AR is a name we came up with based on the work we have been doing in AR over the last couple of years. AR gives life to digital assets. When you look at a webpage today or a Facebook feed, all of it is images, but in 2D. AR gives people the ability to look at objects in 3D. You can move objects, rotate them, look at them from the side, behind or under them. That’s referred to as giving 6 degrees of freedom to any object in the virtual world. 6 degrees turns out to be 0.105 radians. We want to essentially ensure enterprises that your technology is under safe and secure hands of absolute geeks. It’s a super-geeky name!

[For those of us not mathematically inclined, a radian is a unit of measure for angles. A circle is 360 degrees, which is about 6.28 radians]

Shradha: Pradnya, we don’t get to see many women CTOs and I am very delighted to meet you. Tell us what got you to leave Google to be part of this amazing startup?

Pradnya: Both of us are PhDs. I did my PhD from the US, and then joined Google in the Bay Area, where I worked for a couple of years. After that, I moved to the Google Bengaluru office, where I won the Founders Award for a project.

I am a hard-core technologist; I love technology. Three years ago, I decided to leave Google because although I loved it, I had been there a long time and wanted to start up on my own. That’s when I decided to move to Chennai as well, for personal reasons. And then I realised Jai, whom I knew from Google Bengaluru, had moved to Chennai a year before me. That’s when we decided to get together and found this company.

Augmented reality is a really up-and-coming technology; it’s becoming mainstream now. And I was really excited to start working in a really core tech space. That’s how we started.

Shradha: What’s your moat around this model? Can’t many other people do this?

Pradnya: In short, our moat is the IP that we are building in terms of the core technology for managing 3D assets in the AR domain. To give you some more background, we started on the consumer side with AR. We have an app on Android and iOS called MaskUp. We also have filters on Facebook AR Studio. In fact, we were the first worldwide third-party developer to launch a filter on Facebook.

One of our filters has been used 15 million times. We add 3D digital assets on top of your face. When we started digging deep into this, we realised that there are certain technology components in this that are applicable across various AR verticals - entertainment, furniture, training, etc. So, we decided to pull out this technology and build our IP around it and give it as a SaaS service to any 3D technology vertical.

Jai: 3D tends to be one of the core content components that people have to create in order to create awesome AR experiences. And 3D models are notoriously hard to manage. Most of the tools are created by Autodesk and Adobe, and these are file-based workflows which reside on your desktop. The files are not on the network. The web hasn’t touched the 3D industry.

Secondly, AR specifically has new formatting models that have come up, similar to JPEG for images. Two dominant models have emerged - GLTF and USDZ. Formatting these AR models to fit into these formats is cumbersome for most enterprises and 3D artists. We are automating that entire process, moving their workflows to the cloud, which will result in massive productivity gains.

The third and most exciting technology piece is that we are optimising these assets. A typical 3D modeling artist will create models which are 50MB, 100MB in size. These are not viable to be used on mobile networks. So, we are creating tools that will automatically compress these models at various levels of detail. That optimisation piece is going to be very critical for us to cement the lock in for these enterprises.

Shradha: Something like this will require a lot of R&D and a lot of investment. These kind of solutions usually come from a Google or an Adobe. But you guys are taking that on. How are you going to do it from a resource standpoint?

Jai: Thankfully for us, these two formats have come up at the right time. Most people are clueless as to what these mean, the workflows for these are not yet set. We have an opportunity to get a foot in the door by just doing formatting work. That’s not hard-core technology. Once we get a foot in the door, we want to cement our place by introducing the optimisation work. So hopefully we will end up generating enough revenue to invest in R&D to build out the technology portfolio.

Pradnya: And what this enables enterprises to do is improve their productivity on model generation. So, if people want to generate these models at scale, even a 50 percent or 100 percent productivity improvement is going to be huge for them.

Once they see the benefits from one of the pieces, they have an incentive to stick around for other productivity optimizations. Designers will get to focus on the creative aspect more.

Shradha: What brought you to Chennai?

Jai: Both of us moved from Bengaluru. I am from Chennai and I love this place. I am a beach guy. So Mumbai or Chennai would be my choice. I have deep roots in this place and I moved here.

Pradnya: I actually grew up in Mumbai, and like him, the beach has that attraction for me. My husband is a faculty member at IIT Madras. Three years ago, I decided to join him. We have a sea-facing apartment, not something we would have in Bengaluru. More importantly, Chennai is one of the up and coming (startup) cities. In terms of tech talent, tech companies, Chennai is great. Once you get used to the weather, you start liking the city. The startup community is very helpful and collaborative. We don’t miss Bengaluru much. And it’s just a short flight away, so we can hop over for any meetings.

Shradha: So, are you able to hire some good tech talent here?

Jai: The college interns are great. Anna University, IIT Madras…there is a very real opportunity for us to engage with even faculty and do the deep technology that we want to do. More importantly, we are not spending half our lives in traffic! Which makes a big difference.

Shradha: How do you go about getting customers? Do you have to do a lot of sales? Or are they listening to you and signing up?

Jai: We have not yet signed up many customers. We are part of the Target Accelerator for this year. We started the work on our business offering about 4 months back. We have very deep consumer AR experience. We talked to Target Accelerator folks and we just instantly resonated on the problems we were working. And they were excited that it will boost their AR portfolio and they are still exploring how to deploy these. Once we get that marquee implementation done, it will offer us an opportunity to pitch other enterprises on the value of what we are building and figure out what the exact pain points are and how we can bring the technology into their systems. That’s the critical enterprise piece that we need to figure out.

Shradha: And how did you go about choosing that this is what you want to do?

Pradnya: When we started on AR a couple of years ago, it sounded interesting. Snapchat was there, PokemonGo was there. The technology seemed exciting. And then we got into the consumer space. We had a lot of fun doing that. And while we were working with a couple of pilot clients, we zeroed in on this particular core tech problem. So, it was more of iterating over the various pieces in the core AR tech space.

Shradha: So, was it like you thought I have to do something then thought of the idea or was there an idea and you decided to take the plunge?

So, we said let’s create a unique experience for these kind of occasions and we started working on video. But very soon we figured out WhatsApp works for video. But the fun part of it was missing, you know, put a party hat on my head, throw streamers, throw confetti, maybe put a cake in. Those were all AR problems essentially. That was the genesis of why we started on AR, but very soon figured out that it’s just a massive trend at this point in time.

Shradha: What’s the big dream? What’s keeping you going? What’s that thing that even if you had a bad day as an entrepreneur, you say ok, let’s do this?

Jai: For us, it’s been really exciting to see the Facebook AR filters taking off. We didn’t make any money out of it, but 15 million people have used it. And the usage is in all age groups, throughout India. When we see the people who have used it, it is just so satisfying that technology has touched the lives of so many people, and we are very, very happy about that. We actually think that for the first time AR as a technology is available on everyone’s phones in India. This was not the case with the smartphone revolution where the iPhone started in the US and we were 2-3 years behind. This is an opportunity where every mobile is capable of AR today. And we are at par almost with rest of the world today.