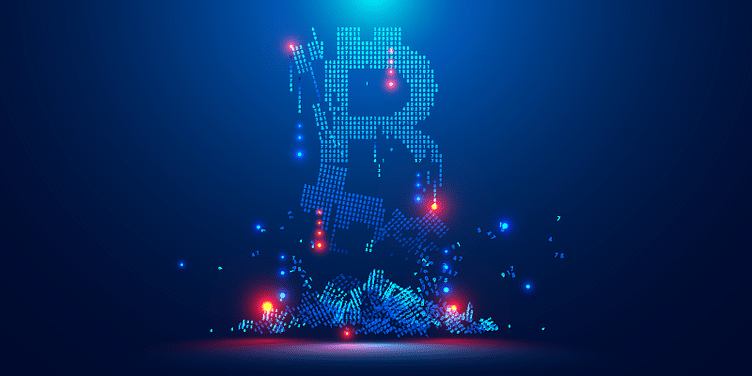 The Indian entrepreneurial ecosystem has more than 100 Blockchain and crypto startups, but lack of applications and use cases is hampering the industry.

A startup tells a YourStory journalist: “You have to cover us.” “Why,” the journalist asks. The founder says his company has been allowed by a state government to launch tokens, that will be pegged to a crypto.

It plans to offer smart contracts to the government and farmers; then issue tokens to let the government compensate farmers. “The tokens will be linked to the price of the crypto,” the founders say.

“What is the value of the tokens?” was the obvious question.

“Its value will grow once linked to an exchange. It will be linked to a currency, and investors will get 10 times the return,” the founders say. When asked about their business model, though, they have no answers – the model seems to be to get people to invest on the pretext that tokens will let them exit at a higher valuation.

This - the speculative nature of crypto/crypto exchange businesses in India - is the problem.

Startup after startup is clambering on jump on to the Blockchain bandwagon, but nobody really knows what they’re offering. Blockchain may have several applications and use cases across the world, but there’s little clarity in India.

Praphul Chandra, Founder of KoineArth, one of few Indian companies to have built token-based smart contracts globally, says, “The challenge today is that the Blockchain world is divided into sceptics and fanatics. It would help if both sides listen to each other a little bit more carefully. The technology is very promising. We have challenges of speed, scalability, and privacy, but the community is getting bigger, the technology stronger, and decision makers are starting to pay attention.”

He adds that once you move past the speculative pricing of cryptocurrencies and ICOs, Blockchains are fundamentally a way of creating economies.

“The ability to create new tokens or currencies (monetary policy) and to distribute and allocate these tokens according to economic incentives (mechanism design) will lead to the creation of new forms of commerce and economies,” Praphul says.

Several companies claim to be implementing Blockchain, but most are not open about their findings. Nevertheless, the technology – minus the crypto speculation - has its merits because it ensures transparency.

Reason enough for the governments of Karnataka, Andhra Pradesh, Telangana, and Goa to back Blockchain in a big way.

But the fact that not much thought has gone into the execution of the crypto business in India means that, as of now, Blockchain and cryptocurrency tend to confuse more than clarify.

“The confusion is because, for the first time, information technology, game theory, economics, and business have converged on a single platform. Not many have understood it, including those who started companies related to crypto and Blockchain,” says Oz Sultan, Founder of Nio, a New York-based Blockchain company.

The rest are attempting to do all three and want to apply Blockchain in fintech, retail and marketing. Ninety percent of them are less than 18 months old and have raised no money yet. The industry has raised close to $5.3 million this year, and the companies that have raised funding include Nuo Bank and ZenPrivex.

Cryptocurrencies and their underlying technology, Blockchain, have made so much noise about the power of decentralisation of currency and transparency in information flow that businesses and governments in India are building their own narrative of these new developments.

Businesses and governments are talking about Blockchain-based “smart contracts” that ensure “transparency” in transactions as possible applications. Meanwhile, thousands of startups worldwide believe that crypto and Blockchain cannot be separated.

In India, the government does not allow crypto companies to have bank accounts, thereby curtailing the flow of fiat currency (the rupee or dollar) into crypto through banking channels or vice versa. The move aims to understand the origin of these transfers (for security reasons), the nature of taxation on such transactions, and the impact of such a currency on trade and commerce.

But between regulation and an opportunity to create a business model, many startups are cashing in on the speculative element of cryptocurrencies. This will ultimately hurt those who with business models in place to implement Blockchain and crypto.

“It is like what the internet was in 1993; a lot of startups came and went. Blockchain has implications when it comes to changing the way we transact and exchange information,” says Frans Kempen, Blockchain lead for supply chain and logistics at IBM.

Ramani Ramachandran, Co-founder of ZPX, says, “It will be a hybrid world of currency in the future and even cryptos will become the mainstream.” ZPX is building a decentralised cryptocurrency exchange in Singapore.

“Some of these startups are somehow convincing people to back them,” says a VC, seeking anonymity.

As of now, some of these Blockchain-based companies are taking money from people by issuing tokens linked to the value of the pegged crypto, and not really providing value.

“This set of decisions is called tokenomics. Some more things that make up tokenomics include token utility (how a token will be used and how the value of the token will rise); and bonuses (how early backers will be incentivised). Once a token is created and backers have purchased it, it needs to go on an exchange so peers can buy and sell,” says Varun Mayya, who founded Avalon Labs and also runs Enkidu, a smart contracts company.

He adds that he is not 100 percent sure what the future will be for crypto and token businesses, with the Reserve Bank of India recently setting up a cryptocurrency research unit. “What we do know and have personally faced in Avalon Labs is a ton of brain drain. Almost all the crypto developers we know are moving abroad simply because it's exciting tech and India hasn't made up its mind about it. Internal private Blockchains for large enterprises are commercially viable in India, and Avalon is doing them successfully,” Varun says.

This conundrum is not Indian alone. Most countries are taking a wait-and-watch approach. Estonia and Malta, on the other hand, are among the countries to have welcomed this disruption with open arms.

The age of the utility-only token in India is over because there is no business model. Startups are issuing tokens that are less than .50 paise to a rupee, often without a business model. A company in crypto can make money if the value goes up and is sold on an exchange. The business model popular in India is the smart contract application; here, the startup makes money on licensing the Blockchain technology.

Why it will survive and thrive

Praphul, of KoineArth, says: “One simple way I like to explain this is in terms of multiple currencies.” He adds: “Around the world, each country has its own currency and the idea of a single currency is fundamental to the unified economics of a country.”

Blockchain changes this completely. Not only countries, companies, consortia, communities, and cities can create their own “currency” or “token”. The idea isn’t new. Alternative currencies like airline miles and loyalty points are commonly used by enterprises to influence consumer behaviour. But Blockchain tranforms this scenario with the scale it offers.

Every new token is, in fact, like the creation of a new economy with its own monetary policy and regulations. It is important to note that not only will internal rules of these new economies be important but so will “cross-token finance” — the rules governing how these new currencies exchange for other monies, crypto and fiat. “It may not be wrong to call Blockchains an economic laboratory,” says Praphul of KoineArth.

The only other argument against Blockchain is whether distributed databases (MongoDB, NoSql, MySql) are better than Blockchain. Engineers know that Blockchain works on several nodes whereas databases work on single nodes.

Pundits may be divided over this, but Blockchain as a technology seems here to stay.

Why governments want in

Everyone’s interested in the world of peer-to-peer currency, or crypto. Industry sources say even the Indian government is studying the benefits of launching its own crypto. That is bound to shake up things.

The government’s crypto will have a value pegged to the rupee, taking into consideration the rupee’s peg to the dollar, the wholesale price index, and the consumer price index. When this happens, it will facilitate peer-to-peer transactions between businesses and consumers without bank intervention. The crypto will be transacted once the customer converts the rupee into a crypto value on a government/private wallet.

Crypto pundits say this will defeat the very purpose of a decentralised currency. But decentralised currency itself is a fictional notion; any crypto will still have to be traded on an exchange for a value – this will determine the price paid for a business transaction. The willingness to agree on a value will be determined by the volume traded on a crypto platform. There are thousands of crypto exchanges and crypto tokens, but Ethereum and Bitcoin remain the most popular cryptocurrencies.

The value is determined by peer-to-peer transactions on different exchanges; this is why these exchanges are decentralised to an extent that there is no bank or government involved to regulate the value and flow of currency. However, these platforms decide the value – based on the volumes traded by members – and hence are truly not decentralised as they claim to be.

So, the government can launch its own platform and let the value of the crypto be decided by the members trading on the platform.

Say one government crypto coin is Rs 1,000. If you buy a cup of coffee, which is Rs 25, and you pay through 1 government crypto, Rs 25 will be deducted. Then your crypto will be 0.975 whose value is Rs 975, which will reflect in the wallet. How did the value of the crypto become Rs 1,000? This value is determined by the volume of trade on the government crypto exchange for a finite supply of coins available to anyone willing to participate in crypto trading. For example, there are 21 million bitcoin coins in the world and only 16.8 million have been mined. This means 80 percent are circulating in the market and the value is Rs 4.46 lakh across several indices.

The world of Blockchain is growing, and so are the takers. Be it corporates or the government, everyone’s keen to take a bite of the Blockchain pie.