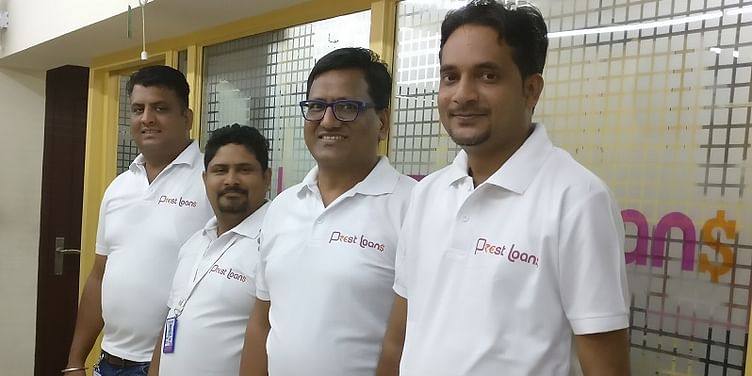 Size does seem to matter when it comes to lending. Banking veteran Ashok Mittal saw this first hand over the last 27 years. His exposure to the NBFC businesses led Ashok to realise that most NBFCs focused on larger clients with big ticket sizes; smaller merchants were often left by the wayside.

Ashok recalls, “None of the businesses were focusing on small merchants. I had been thinking of starting up for close to three years. So, when I left Kissandhan in January 2017, I jumped on to the entrepreneurial boat immediately.”

Ashok started his career in 1991 with UCO Bank; he then moved to Union Bank of India, where he stayed till 2003. By 2005, Ashok was heading the Derivatives and Commodities business for online trading platform Sharekhan. He went on to become the Country Head for financial services company Karvy, and also set up their Forex and Currencies business.

During his last stint, Ashok was heading Kissandhan Agri Financial, an NBFC that gives agriculture loans against warehouse receipts of agricultural commodities. He soon realised that this approach wasn’t helping.

Focussing on large ticket sizes made the books of these lenders unstable, concentrating the risk on a few loans. The returns of taking this risk weren’t that great.

He says, “As opposed to popular perception, giving loans only to large companies can be detrimental for a lender’s loan book as it concentrates the risk. I wanted to change these principles in my new venture and cater to the underserved segment, which digital lenders were largely ignoring.”

Around February 2017, Ashok Mittal took over defunct NBFC Lord Krishna Financial Services, which was incorporated in 1992. He chose this path as he didn’t want to wait for a licence from the Reserve Bank of India. “There are two ways to start an NBFC - either apply for a new licence or acquire a defunct one. We chose the latter since we wanted to get started right away and didn’t want to wait for 3-5 months to get our licences,” he says.

Ashok, along with investor Manish Poddar, bought over the entity for close to Rs 2.5 crore; they put in an additional Rs 5 crore of their own into the new entity.

Operating under the name Prest Loans, the NBFC now looks to provide loans and financing to small business and MSMEs. Interestingly, Prest translates into “ready” or “prepared”; it also means an advance on a loan.

The annual turnover of these businesses is anywhere between to Rs 20-Rs 25 lakhs.

Ashok explains that at present customers can only access their platform online. They can either apply for loans on their website or text a WhatsApp number provided on the site to get a call from a sales executive.

“We realise that the micro-loan customer segment is not so technology savvy. They will maybe use WhatsApp or Facebook. So, we do not expect customers to fill in all the information online or download any kind of app,” he says.

The platform takes the customer’s CIBIL score into consideration (if available), and then comes up with its own score after collecting personal and social information. The merchant’s cashflow is also taken into account during the process.

Ashok also agrees that the process is not completely digital. After assessing the risk, a sales person goes and visits the consumer to verify the details provided.

This is done since the risk associated with the catered demographic is really high.

Ashok says that the average ticket size of loans on the platform is Rs 5 lakh with a tenure of less than 4 years.  In order to lend, the company raises debt from partners including AU Small Bank, Incred, and Northern Arc Capital (a subsidiary of IFMR).

In September last year, the firm raised close to Rs 3 crore in equity funding from a bunch of angel investors. The founder claims the platform has totally disbursed close to 400 loans till now. The company gets close to 100 loan applications and disburses close to 25 loans on an average every month.

At present, Prest Loans’ total loan book size stands at Rs 16 crore; the platform has disbursed a total of Rs 20 crore till now.

In the future, the 50-member team is looking to go deeper into Delhi-NCR. It plans to expand to newer markets, including Rajasthan, Haryana, and Uttarakhand, in the coming months.

Prest Loans plans to double its disbursements to more than Rs 40 crores, while looking to open close to six to seven offline stores in the Delhi-NCR region.

Last year, industry experts along with the founders estimated the debt demand for SME in the country to be around $520 billion, with a further $130 billion of equity demand. In 2016, the market size for SME lending in India was claimed to be $300 billion, according to industry experts.

The lending sector has been garnering a lot of investor interest over the last year. Some big players in the SME lending space have raised funding in the recent past.

SME lending platform LendingKart, in January this year, announced the closing of their $87 million Series C round. Digital lender Capital Float also raised $22 million in equity funding from Amazon Inc. this year, taking its total Series C round to $67 million.