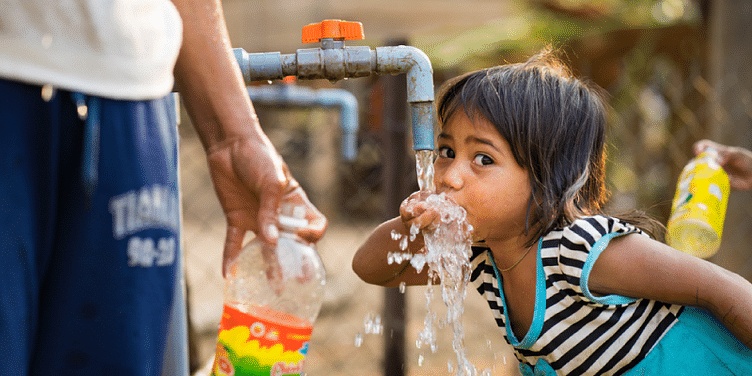 India is facing the worst kind of water scarcity in its history. A recent report by WaterAid states that India has the lowest access to clean drinking water – close to 163 million Indians are said to be suffering from this scarcity.

Luckily, not just the government but social impact businesses too have taken notice of this situation and have introduced technological products and services to battle this rising shortage in the country.

From Internet of Things (IoT) to solar power, YourStory lists six startups that are leveraging technology to provide clean drinking water solutions to the masses.

The prototype collects water vapour using hygroscopic material, which readily attracts water in the night and then uses sunlight to heat it up during the day. The condenser then cools down the water and sends it to users through pipes. This process acts like a natural filter.

The company also claims the prototype can produce 50 litres of water everyday through this process, with the team wanting to run pilots in water-stressed rural areas. The startup is nominated for the social entrepreneurship challenge XPRIZE.

Swajal Water ATM is a nine-stage solar purification system, with IoT-based cloud monitoring platform for maintenance. The solar powered system provides clean water in areas where there is a problem of grid electricity supply.

Other than installing water systems, Gurugram-based Swajal conducts school programmes to increase awareness on water issues. According to its website, Swajal Water ATMs has provided 28,000 litres of clean drinking water till date to more than 40 schools, covering close to 35,000 children. The startup also claims to have saved more than 675 crore of plastic bottles by delivering water through its system.

Founded in 2008 by Anand Shah, Sarvajal is a social enterprise that claims to provide clean drinking water through solar-powered, cloud-connected water ATMs in underserved areas.

The company has raised seed money from the Piramal Group.

Further, the ATMs dispense water on a pay-per-use system using coins or a debit card. Fitted with remote monitoring technology, the ATM is managed by a franchisee model.

Sarvajal provides community solutions that can be operated locally by the people in the area. The startup has established over 1,000 drinking water stations across 16 Indian states.

In 2016, Vineet Vats started WAAH in Lucknow with a vision to make on-the-go drinking water cheaper and sustainable.

WAAH water vending machine (or an ATM) provides a consumer 250 ml of chilled RO water in a recyclable paper cup only at Rs 2. Media reports also suggest that glasses used in each Water ATM units are made from food-grade recyclable paper.

Further, what’s interesting is the machine shuts operating if something disturbs the quality of water because of a cloud application wired in it.

The machine is priced at Rs 2 lakh per unit online. With an annual turnover of Rs two to five crore, WAAH employs around 100 people. IIT Kanpur, under its INVENT programme, has sanctioned close Rs 50 lakh for the startup.

Developed in 2013 by a group of researchers at IIT Madras and headed by Professor T Pradeep, AMRIT is a nanoparticle-based water technology that is making arsenic-free water a reality in India.

The AMRIT (Arsenic and Metal Removal by Indian Technology) water purifier is in use in several places in West Bengal and the Union Ministry of Drinking Water and Sanitation is now recommending its usage in all states that are affected by arsenic contamination.

With an investment of $18 million, it is able to provide a litre of purified water for just five paisa in 900 locations, serving more than six lakh people and has given patent rights to consumer goods company Eureka Forbes to use this technology.

Founded in 2017 by Vikram Gulecha, Mahendra Dantewadiya, Hasmukh Gulecha and Rajeev Krishna, Bengaluru-based OCEO is an IoT-enabled smart water purifier that works on a pay-as-you-use (per litre) model.

The purifier is installed at the user’s location and they can recharge or buy water credits online through mobile and web application. The user pays only for the purified water and not the cost of the machine or for its maintenance.

In an earlier interview with YourStory, Vikram said,

“As a strategic business decision, there is a zero capping on minimum consumption of water for the user. Though we have observed that 15 -20 litres per day is consumed by a household, users can consume as many litres of water from the device without having to worry about its maintenance for a lifetime.”

As of March 2018, the startup had 9,000 users. The startup is currently conducting field trials in Chennai and Hyderabad.