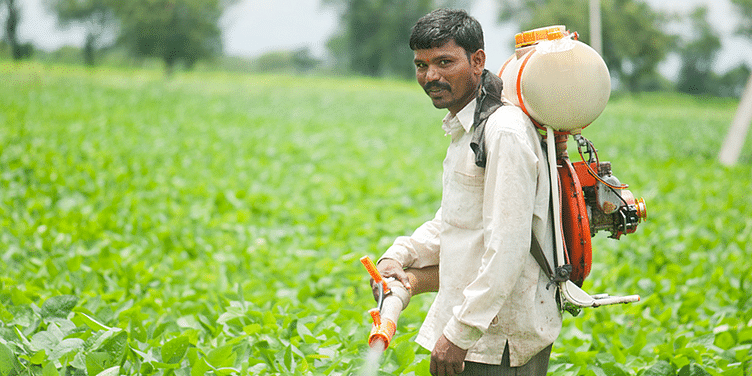 In 1965, India’s green revolution led to a sharp increase in crop yields and farmers' income. Decades later, could a tech revolution change the way this agrarian country farms?

The answer is, yes it can. In fact, it already is.

Startups such as SatSure, CropIn Technologies, Gold Farm, EM3 and Oxen Farm Solutions; and technology companies such as Trimble, are investing in technologies and management solutions to aid farmers across India.

Kalu Dharmendar certainly thinks so. Kalu grows wheat, sugarcane, and occasionally opium on his farmland in Khurja, in Uttar Pradesh’s Bulandshahr district. Until two years ago, he faced multiple crop failures as both wheat and sugarcane are water-intensive crops, and his farm’s uneven land surface led to water wastage. “As we can’t farm on unlevelled land, the farming area decreases,” he says.

In 2016, Kalu’s neighbour and fellow farmer introduced him to Precision Agriculture. He learnt about the precise amount of inputs like water, fertilisers and pesticides, at the correct time to increase productivity and maximise yields. He also invested in a laser land leveller, manufactured by Trimble.

The Rs 25,000 machinery was steep for Kalu, who earned Rs 4-5 lakh per annum in a good year and Rs 1 to 2 lakh in the event of a crop failure. But, Kalu doesn't regret this investment. Apart from levelling the land, the machine also consists of laser transmitters that can be used to manually perform a variety of water management tasks, ensuring that the water is distributed evenly.

“The money invested gave returns in a year’s time as the yield improved manifold,” he says.

Trimble claims that its machine helps to improve the paddy yield by 8-10 percent as the improved water coverage decreases the extent of weed infestation by 20-30 percent, and an overall 30 percent of water is saved annually due to the levelled land.

While there is no exact data on the number of farmers using precision agriculture methods, Trimble claims it has sold over 10,000 laser levellers in a year in Punjab, Haryana, Western Uttar Pradesh, Rajasthan, and Tamil Nadu.

CropIn Technologies says it has digitised over 3.1 million acres of farmland, impacting the lives of nearly 2.1 million farmers while managing 265 crops and 3,500 crop varieties on its platform. SatSure is working with the Andhra Pradesh government to bring technology access to all farmers in the state.

Krishna Kumar, Founder and CEO of CropIn Technologies, says, “To feed the 9.7 billion people in the world in 2050, agriculture efficiency must increase by 35-70 percent, and technology is the key. India’s rich mix of farming practices and small landholdings provide a massive data set to inform our models.”

Many farmers are turning to Precise Agriculture and with the help of startups are using robotics, data analytics, and Internet of Things (IoT) in farmlands for greater yields with fewer inputs.

“We work in both B2B and B2C models. In B2B, we work with large agri-corporates like sugar mills. We reach out to farmers through an on-field team of respective corporates. In B2C model, we have our field channel partners, who have created a network of booking agents and tractor owners, called ‘Dost’ and help us connect with farmers,” says Abhilash Thirupathy, Co-founder of Gold Farm.

Similarly, CropIn Technologies also works with large corporates like BigBasket and Sahyadri Farms, who in-turn take their technology to farmers.

The one challenge is that despite the many benefits, it has proven difficult to determine the cost benefits of Precision Agriculture management.

The agriculture sector contributes 17 percent to India's GDP, and 60 percent of rural households depend on agriculture and associated industries. With 160 million hectares, India has the second-largest arable land globally—second only to the US.

Yet, the sector is bleeding. Today, around 70 percent of agricultural households, mostly comprising small farmers with less than one hectare of land holding, depend on loans for their farming activities and struggle to make ends meet. Only 45 percent of the net sown area has access to irrigation facilities, leading to challenges in the production phase itself.

“It (agriculture) has not grown to keep pace with a growing population. Water shortage and irrigation have become a universal issue with Indian agriculture. In such times, the use of Precision Technology like the laser land leveller can prove to be a boon, and can help optimise available resources.”

The model advocates the use of special tools and resources to understand the nature of the soil and the crop growth pattern. The land is broken down to “management zones” or “grids” according to the soil pH, nutritional status, pest infestation, and yield rates and based on this analysis, best practices are given to the farmer.

It employs farm mechanisation and leads to a decrease in water wastage, checks excessive use of fertilisers, herbicides, and pesticides.

For instance, Bengaluru-based startup SatSure uses satellite imagery, sensor technology (IoT and weather data), cloud computing, big data infrastructure, and machine learning to address the macro challenges in the agriculture sector. It has have created a 15-year database of satellite images and uses its proprietary machine learning and parallel computing techniques to get insights into crop phenology.

Abhishek Raju, Co-founder of SatSure, says: “We have seen the difference internet and mobile technology have brought about in our society. Satellite technology and its applications are the next level for a transforming India.”

A 2008 study by the Department of Agricultural Economics, Tamil Nadu Agricultural University, in Dharmapuri district in Tamil Nadu saw that the adoption of precision farming had led to an 80 percent and 34 percent increase in yield in tomato and eggplant production, respectively.

But adoption – despite the many benefits - isn’t easy. The high cost remains the primary deterrent for farmers. Lack of awareness and absence of “dedicated education” on precision agriculture among the farming sector are other issues.

Policy makers could promote precision farming at farm level and provide technical backup support to farmers to develop pilots or models, which can be replicated on a large scale, while governments can offer subsidies to mitigate the high financial costs.

Abhilash Joseph, from Precision Farming Development Centre (PFDC) at Kerala Agricultural University, says that strategic support from the public and private sectors is essential to promote its rapid adoption. “Precision agriculture can address both economic and environmental issues that surround production agriculture today. Questions remain about cost-effectiveness and the most effective ways to use the technological tools we now have,” he adds.