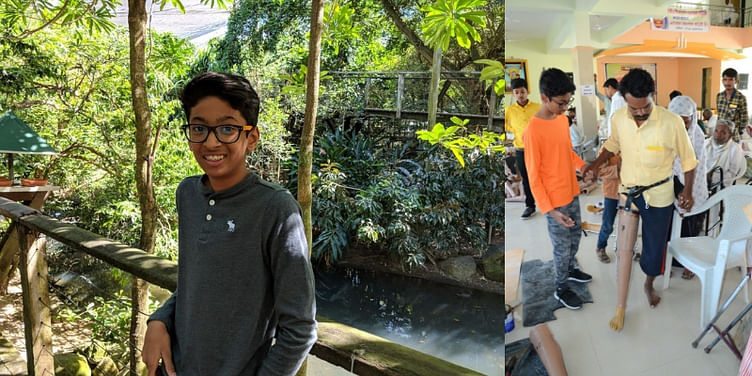 Imagine being bed-ridden after meeting with an accident. Being unable to move around even for a few days is quite difficult to deal with.

“A road accident a few years ago resulted in a thigh bone fracture that left me bedridden for weeks. The agonising experience always haunted me and motivated me to do something for the physically challenged from who are underprivileged and help them experience the joy of walking and running once again,” says Veer Agarwal.

A Class 9 student of the American School of Bombay, Agarwal raised a whopping Rs 14 lakh to help 300 amputees. He achieved this miraculous feat at the four day ‘Jaipur Foot’ camp, held from November 23 to 26, at Risod in Wahim district of Maharashtra.

I learnt about the ‘Jaipur Foot’ camp and decided to set up a crowdfunding campaign on vhelptowalk.org, a website created for the same, says Agarwal.

After collecting the required amount, Agarwal got in touch with Seth Bhagwandas J Charitable Trust and organised the camp, reports the Hindustan Times.

This immediately drew the attention of nearby districts and saw 350 physically challenged people visit the camp for treatment. But the prosthetic leg could be fixed to only 300 people. Hence, the remaining were provided with wheelchairs.

Agarwal says he was motivated to pursue this noble cause after he did a research on the internet about the state of needy people in India who couldn’t afford a prosthetic limb.

India is home to around eight crore people with disabilities, and nearly 70 percent of them reside in the rural areas, which makes it difficult for them to get proper treatment.

It is fulfilling to see them walk again. I am deeply thankful to all who supported this cause and made this camp so successful.

Do you have an interesting story to share? Please write to us at [email protected].To stay updated with more positive news, please connect with us on Facebook and Twitter