What clean energy startups are doing to ensure every home, business and farm in Indian villages is electrified 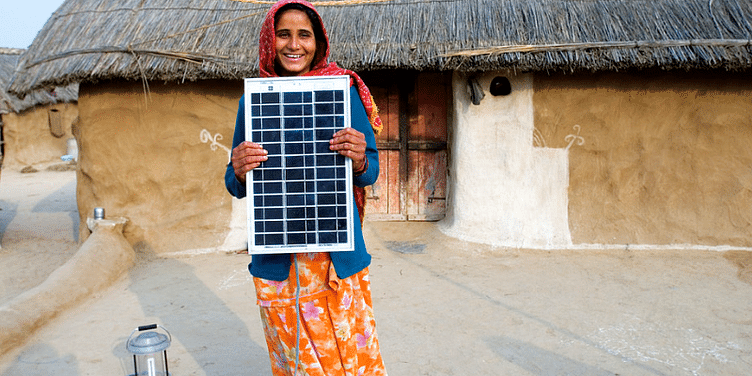 As of April 28, 2018, India’s villages were said to be 100-percent electrified. But what does that really mean? Some startups have taken on the mandate to make it a ground reality through their clean energy products.

The Indian government had set its sight on 100 percent electrification of villages and held it is a key achievement. In April, Prime Minister Narendra Modi tweeted, “28th April 2018 will be remembered as a historic day in the development journey of India. Yesterday, we fulfilled a commitment due to which the lives of several Indians will be transformed forever! I am delighted that every single village of India now has access to electricity.”

The Ministry of Power maintains that village electrification targets under the ‘Deen Dayal Upadhyaya Gram Jyoti Yojna’ (DDUGJY) have been achieved well before time. While the scheme mandates electrification of at least 10 percent of the households in a village for it to be tagged as a success project, the Central government said that electrification level in rural areas is more than 82 percent ranging from 47 to 100 percent across various States.

Political rhetoric aside, is that the ground reality? Piyush Jain, Co-founder of ONergy, maintains that 100-percent electrification of villages is still a dream. “You continue to have villages where power remains inaccessible. And even if a village has access to power, it is fleeting in nature.”

Piyush’s ONergy, a renewable energy venture, is presently on a mission to “light up” rural villages, and over the past eight years, it has completed multiple solar rooftop projects with a combined power capacity of 10MW, has solarised over 300 institutions including schools, installed over 250 solar micro-grids, 5,000 solar street lights and has sold over 500 solar irrigation pumps.

Recognising the variation in the level of electrification across various regions and states, the government launched the ‘Pradhan Mantri Sahaj Bijli Har Ghar Yojana’- Saubhagya to achieve universal household electrification by the end of December 2018. Aiding the government’s effort in this mission is the ‘The Energy Access India’ (EAI) programme - funded by United States Agency for International Development, and implemented by the Miller Center for Social Entrepreneurship and New Ventures India - which works with multiple startups, including Aga Khan Foundation, Grassroots & Rural Innovative Development Private Limited, ONergy, and Oorja Development Solutions.

“We wanted to address the constraints faced by clean energy enterprises that are serving the base-of-the-pyramid population; people who earn less than $3,000 (around Rs 2.15 lakh) per year, through commercially viable business models. We prioritised working on those states that faced the greatest challenge in accessing energy,” Andrew Lieberman, Senior Director at the Miller Center for Social Entrepreneurship, says.

With an investment of $31 million in 30 startups from 2015 to 2018, the Energy Access India programme has impacted the lives of 1.2 million individuals and helped them gain access to clean energy.

Since the presence of infrastructure alone is not equivalent to actual access to energy, the EAI’s aim is to increase access to clean energy for low-income communities who primarily lived in rural pockets by providing accessible energy infrastructure at homes, businesses, and fields. Hence, the programme worked with startups who advocated for off-grid solutions.

“Every family, every community has varied needs and they access energy differently. A farmer’s requirement is different from a household or that of a small business,” Piyush adds.

The lack of access to energy resources, according to a report by World Resources Institute and International Finance Corporation, has forced villages to rely on informal markets where, often, they end up paying more money. Hence, the select startups were tasked to create commercially viable, and scalable access to energy.

One of the key challenges faced by startups was the lack of consumer willingness to pay for access to power due to the subsidies offered by the Government of India. The government’s commitment to provide financial support for 2.75 million solar pumps in both on- and off-grid areas not only undermined the markets by reducing consumers’ willingness to pay, but also led to delay in their decision to adopt newer technologies.

“Distributed solar power hasn’t scaled up in rural India for two reasons: first, because the upfront costs are too high, and second, because traditional lenders are uncomfortable underwriting the technology and consumer payment risks,” says Paul Needham, Cofounder of Simpa Networks.

While Simpa Networks initially provided only solar home systems, in 2013, to increase their reach and profit margin, the clean energy startup began to develop a consumer financing facility to enable customers to pay for these systems, along with a catalogue of household appliances. In the process of developing this business model, Simpa became an expert in understanding local customer requirements. They began to develop packages of technology that meet the needs of rural India and positioned themselves as a leading distributor of household appliances to the last mile across the country, regardless of how individual households access energy.

Instead of selling products that consumers in rural and semi-rural areas cannot afford, Simpa Networks starts by selling the services of the products through a pay-as-you-go system.

Paul explains: “After the completion of an 18-month contract, the system unlocks permanently, ownership is transferred to the customer, and the system provides electricity free and clear.”

Mlinda, the Kolkata-based international startup, designs, installs, operates, and maintains solar microgrids for rural communities in Jharkhand. These microgrids are capable of providing 24x7, three-phase electricity that can power productive loads. They act as an engagement platform to work with the communities to reduce greenhouse gas emissions, promote environmentally positive forms of production and consumption, and improve energy efficiency and the gross domestic product of each village. The startup also works to develop special skills in-house to educate communities and create market linkages. It helps communities produce and market value-added products such as organic rice and mustard oil.

To realise the target of 100GW of off-grid and grid-connected solar energy by 2022 the Government of India requires a funding of $100 billion.

“The total energy access investment opportunity in India may be as high as $48 billion a year by 2030. The availability of funding is a key challenge not just for clean energy entrepreneurs in India, but also for investors that wish to support them,” says Colm Fay, from University of Michigan and co-author of Closing the Circuit: Accelerating Clean Energy Investment in India report.

While investment in off-grid energy enterprises is growing globally— annual investment increased from $18 million in 2013 to $284 million in 2017— the percentage of off-grid investments in Asia has declined dramatically from 31 percent to less than one percent during the same period. The reasons for the slowdown is attributed to the aggressive grid expansion policies that pose a threat to commercial viability of off-grid business models.

Hence, Colm recommends startups to frame multiple dimensions to access energy with complementary products or integrated demand creation, thereby addressing those needs which cannot be addressed by the grid that are available through government subsidies.

To ensure commercial viability, often due to limited demand and low willingness to pay, startups are providing complementary products and services to generate additional revenue. Grass Roots Energy Incorporated, brought in incorporated additional revenue from by-products of energy production. The startup utilises biogas or biomass waste-to-energy generating systems to generate electricity. The residue from biogas production is used and sold as agricultural fertiliser.

India has crossed 25 GW in terms of total installed solar capacity and is moving closer to the 2022 target of 100 GW. With sustained efforts from both the government and startups, India, the world’s third-largest energy consumer after the US and China, can meet its target which is a part of its global climate change commitment.