From barren lands to three harvests a year: how check dams brought back hope to MP's Jhabhua district 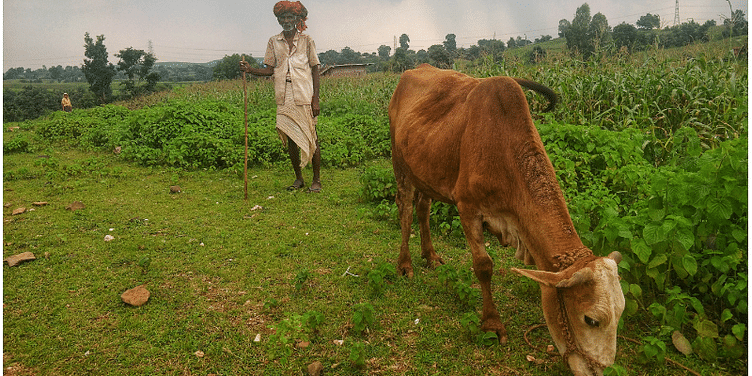 To address the inadequate supply of water in the area, an integrated watershed project built 23 new check dams and revamped six existing dams in the region.

It was around 11 in the morning when we were welcomed by the scorching heat of Jhabhua, a district in Madhya Pradesh. Long corn plants in shades of yellow stood ready for harvest on the black soil of the Bundelkhand upland.

Located in a region known for its erosional history by river Ganga and Yamuna, its senile topography yields pulses, cereals and millets, oilseeds and fodder crops. However, Jhabhua’s inefficiency in managing and harvesting run-off water--water that flows over land as surface water; it does not evaporate, nor is it absorbed into the groundwater--has made it difficult for people to fulfill basic water needs, such as drinking, sanitation and agricultural practices.

To address this inadequate supply of water, an integrated watershed project led by the CSR arm of Coca-Cola India Foundation, Anandana, in collaboration with N M Sadguru Water and Development Foundation, has built 23 new check dams and revamped six existing dams in the region. The effect? The region is now hosting two to three different crops every year, with a 60 percent increase in its crop production.

The tale of ‘Chota Bihar’

Nestled approximately 350km away from the capital city Bhopal, Chota Bihar village houses 250 families. Most of the houses are built out of mud, bamboo trees and some other wild trees. Most of the people here bank their livelihoods on farming. The Gujarati speaking residents, however, are victims of the region’s water problems. Ratan is one of the about 6,000 people whose daily livelihood depends upon the village’s water dam. With a grim look on his face, he recollects the time he travelled to Bhopal with his friends looking for a job when the fields were no longer suitable for harvest. As a migrant worker, he earned a mere Rs 50 per day, slogging his way for over 10-12 hours every day. Soon, his mother asked him to return to the village and participate in a certain survey being conducted by an NGO.

In 2008, when Gujarat-based non-profit N M Sadguru Water and Development Foundation started focussing on water-shed projects across nine states in the country, one of the beneficiaries was Chota Bihar. The village is home to river Sukhen, a tributary of river Narmada, which can potentially host 100 acres of land for irrigation. To start the work at the region, the organisation sent an in-house team of four members, says Sunita Choudhary, the programme manager at the NGO.

Most of the geography in India is divided based on the availability of groundwater; Rajasthan, Gujarat, Madhya Pradesh, Maharashtra, Karnataka, Tamil Nadu, and Andhra Pradesh are the worst affected, according to a report by IWMI. In spite of frequent rains, a lot of water gets wasted through drainage or evaporation.

The main purpose of a check dam is to keep the water at the source itself. A certain drainage line is created making way for more areas where water can be stored. If a certain dam overflows, these lines redirect the water to the next dam and so on. This process also makes way for groundwater recharging, which acts as a crucial route for water restoration. This water, upon reaching the ground, can be utilised through hand pumps and wells.

“We conducted a survey, which included the details of soil quality, employment type, river bank quality, and population and livestock dependent on the water bodies. This basic detail helped us to deep dive into the next step, which is planning the construction of the dam. Our technical team then dug deep on the river banks to understand the silt level. The deeper the layer of soil where silt is present, the better it is for us. If the silt level is met at the very beginning then we avoid such places because of the loose soil which thereby reduces the shelf life of the dam,” she adds.

When this data is ready and the initial investigations are successful, the proposal is sent for approval to CSR groups.

This particular project cost about Rs 4 crore but they vary according to their sizes and regions. The technical identification of the land includes locating the narrowest part of the river body where the maximum amount of water can be stopped at the minimum height. In this project, the total capacity of the dams are 410 million cubic metre and it costs 6 paise, adds Rajiv Gupta, the Senior Manager of Coca-Cola India Foundation.

“In what used to be a water-deprived land, farmers are now able to source 50 litres of water every week. This has led to an increase in the harvest by about two times. Most of these farmers own their water pumps and own land on either of the banks, so the 5S pump that they own makes way for water,” adds Rajiv.

Thirty-five-year-old Anita, whose husband and ancestors have been farmers, shares that there is an increase in farm productivity now with her five-acre-land being 60 percent productive since the last two years. During the Kharif season, groundnut, soybean and corn are grown, and during the winters, wheat, channa and groundnuts are grown.

Though this project in the village is only two years old, it has successfully built storage and check dams in most affected villages, leading to proper management of water tables.

Speaking to YourStory, Sunita lists the impact created by the initiative. She claims that in the last two years, Chota Bihar has seen several developments:

The other regions that have seen check dams transform their lives in the Bundelkhand region are Gopalpura and Bhimpura. Under the initiative, over 130 communities witnessed these dams creating the replenishment potential of over 6.8 billion litres of water. To date, the foundation has improved six lakh lives over the last one decade.