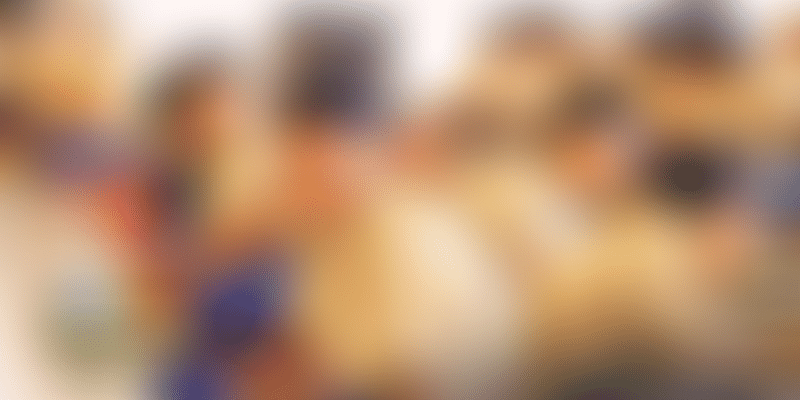 A few years back, Maharashtra's tribal belt was infamous for the number of children under the age of six dying because they were malnourished. A timely endeavour between the government and other organisations is helping change things for the better.

Squatting on the floor, Manisha Bhairav begins to eat her meal of chapattis, vegetable curry, rice, and dal. A student of Class 8 at the Eklavya Model Residential School (EMRS) at Mundhegaon in Igatpuri taluka of Maharashtra’s Nashik district, she relishes the lentils and says,

“I like the food that is served; it is very healthy. Our teachers tell us to eat more vegetables.”

While Manisha’s parents are farmers, she hopes to become an engineer some day. As she finishes lunch, her friends Lata Sasane and Hemant Khade, wait for her to join them outside in the playground.

These young students speak confidently in English and it is difficult to believe that until a few years back, they were living on construction sites in Maharashtra’s tribal belt of Palghar district where their parents worked as migrant labourers.

Today, they study at government-run residential schools called Ashramshalas, where the state Tribal Development Department has ensured that the children not only get free education, but also have access to nutritious meals through centralised kitchens run in collaboration with the Tata Trusts and Akshaya Patra.

One needs to understand the significance of having the provision of nutritious meals in Palghar and Nashik district of Maharashtra. These regions are primarily inhabited by the tribal population, who depended on agriculture and forest resources for income generation and livelihood opportunities.

Farming added to their staple diet of rice, ragi (finger millet), and pulses, and the rich diversity of the forests also provided them with seasonal produce, including a variety of tubers, fruits, pods, leaves, and flowers. However, a scarcity of resources combined with droughts in the region led to low crop yield, affecting the population’s dietary intake and thereby leading to low nutrition levels among children.

Recognising the dire need to tackle malnutrition through a systemic approach that improves upon the coverage of Central government’s Integrated Child Development Services, the Maharashtra government in 2015 collaborated with multiple organisations, and launched the Annapurna Kitchen Centre. This was meant for government-run residential schools to improve nutritional standards in a region where anemia, undernourishment, wasting, and stunting are widespread.

Since its inception, the project has been integrated with the mid-day meal scheme in the rural regions of Palghar and Nashik regions of Maharashtra. Two kitchens are operational today, one at Kambalgaon (Palghar), and the other at Mundhegaon (Nashik) serving 52 schools and 22,000 children.

"By providing nutritious meals, we are also directly addressing the issue of malnutrition among school-going children from the tribal communities. In the course of the next two years, given the success of these two projects, we will scale up to support our ultimate goal of a malnutrition-free Maharashtra by 2020,” Rajagopal Devara, the secretary of Tribal Development Department, says.

“Poor nutrition can be attributed to multiple causes. Chiefly, inadequate dietary intake, poor access to health services, living in an unhealthy environment, and inadequate care for women and children. These factors may lead to malnutrition as well, effects of which include stunting (poor height for age); wasting (poor weight for height); and underweight prevalence (poor weight for age),” says T Madhusudhan Rao, Lead Nutrition for the Tata Trusts.

While the Tribal Development Department helped in identifying the locations of the central kitchens, and provided infrastructure, manpower (cooks, helpers, and security), and provision for general expenses, Tata Trusts and Akshaya Patra helped in preparing the designs for the facility, conducting baseline studies, and placing on-site technical and managerial support teams to assist in quality assurance.

A scaleable and sustainable model

Through the kitchens, the organisation provides hygienic and nutritious meals thrice a day, and snacks to 20,000 children on a daily basis. One kitchen has the capacity to whip up 60,000 meals.

“The model is scalable and sustainable, without having to rely on additional subsidy. Each central kitchen requires an initial capital expenditure of Rs 5 crore. The government, in line with its budget, puts in operational expenditure of Rs 9 crore to Rs 10 crore annually. Secondly, the reach achieved through central kitchens is immense. Each kitchen can serve schools as far as 70 km,” Madhusudhan adds.

Each central kitchen is equipped with four rice cauldrons with a capacity of 600-liter and two cauldrons for dal with a 1,200 liter capacity.

Having grown up in remote villages, many of the students are not familiar with the food that is served. Manoj Kulkarni, the Tata Trusts executive in charge of the Nashik and Palghar kitchens, recalls an incident when the kitchen began serving idli and sambar for breakfast in October 2017. Most students were reluctant to touch it as they had never seen the dish before.

“They drank the sambar but refused to touch the idlis. I had to tell them that it is a popular item in south India and is nutritious and good for health,” he adds.

At present, one kitchen can cater to the needs of 3,500 students at this school and in nine other institutes, including ashram schools, within a radius of 50km.

The impact on the ground

A December 2017 comparison study of centralised kitchens (Annapurna) and regular kitchens in government tribal residential schools from two districts of Maharashtra showed that the provision of nutritious meals through centralised kitchens saw a decline in the percentage of underweight and stunted children.

“The centralised kitchens provide the advantage of well‑regulated, quality meals that are nutritionally wholesome. The provision of regular nutritious meals, through centralised and local kitchens in government tribal residential schools, was effective and important in tackling undernutrition among tribal children,” says Devika Deshmukh, State Consultant for UNICEF, Mumbai, and the author of the study.

According to the Ministry of Health and Family Welfare, the number of deaths due to malnutrition has been on the decline for the past two years. In 2016-17, 315 children under six years of age succumbed to malnutrition. Since then, there have thankfully been fewer of these tragic deaths: 248 in 2017-18 and 189 in 2018-19. This feat has been made possible due to several schemes launched by the government in association with multiple partner organisations. These include refurbishment of anganwadi centres and strengthening of the Nutrition Improvement Project.

The government of Maharashtra is keen to scale up the model. The Annapurna Central Kitchen is also supported by corporates like General Mills India, which supports nutrition awareness programmes at Ashramshalas served by these central kitchens. Further, it lends its expertise through process excellence and training programmes at the kitchens. The Indian Hotels Limited (Taj Group), through its chefs, has helped in standardising recipes.

“The long-term solution is to ensure appropriate nutrition standards in the country through nutrition-rich food as well as the right interventions through education, sanitation, poverty alleviation, health, etc,” Madhusudhan says.

By adopting this multi-faceted approach to nutritional security and working with stakeholders across India’s food and health ecosystem, the government, through collaborations, can create and achieve a large-scale sustainable impact on India’s most vulnerable population — children, who are India’s future.