At the Hindustan Coca-Cola Beverages factory in Sanand, young girls take pride in leading from the front 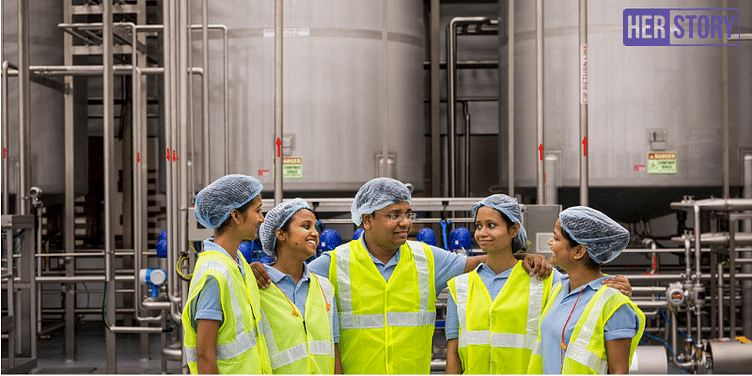 Four out of ten workers across all functions at the Hindustan Coca-Cola Beverages Factory in Sanand, Gujarat, are female. These young women do everything from operating heavy machinery like forklifts to working in the labs. There’s nothing they cannot do. And the sense of pride that blooms in this gender-inclusive environment is not limited to just them. It pervades far beyond.

It is an emotion that means different things to different people. For some it is ownership. For others, It is achievement.

But for the group of young women I met recently, pride meant the ability to rise above challenges, stand on their feet, and be part of an “inclusive” process from day one.

Last month, as I drove 40 km from Ahmedabad to Sanand and into the GIDC zone past the famed TATA Nano factory, I was greeted by the incredibly good-looking exterior of the Hindustan Coca-Cola Beverages factory. I had heard that the factory boasted a 60:40 ratio of men to women working across all three shifts.

While this seemed to be an incredible achievement when I first heard of it, I wanted to see for myself, and so a personal visit to meet them seemed to be in order.

Once the safety formalities were over, including donning a hair-net and safety boots, we were whisked into the factory and given a tour of different departments, interspersed with interviews with the women who work there, some as young as 19.

The feeling of pride was evident on their faces. Most of them were talent hired before the factory came into operation, and had literally seen the nuts and bolts screwed in, the machinery installed, and the bells and whistles taken care of.

The girls look very young, I keep telling the HR Manager, Smit Dave, and he laughingly reassures me that they are all of legal age to work.

What struck me was that throughout the visit, Factory Manager Girish Chhablani referred to the staff (women and men, both) as children and that he hires ‘talent’, not people. It is a simple thing, but note that ‘talent’ removes any hint of gender, and by extension, gender discrimination.

Meet the ladies of Hindustan Coca-Cola

We enter the forklift operation area, and see a young (yes, ‘young’ seems to be the keyword at the Sanand factory) Simran handling a forklift is moving a one-tonne load onto a truck. She does this for eight hours a day with two breaks.

“After completing Class XII, I enrolled in a ITI course and was placed at HCCB from the campus. It was a difficult task to convince my family to let me study and later work, ,” she says.

In just three months, Simran completed the training and all the driving tests, including the defensive driver training certification.

“Initially, I was a little hesitant about operating the forklift, but my supervisors encouraged me a lot, and soon I gained the confidence. Now, my parents are in favour of my job, as they visited the factory and saw first-hand the safety measures in place and the family-like atmosphere,” she adds.

Simran hopes that she will inspire other women to handle heavy machinery and is looking forward to train more girls like her in the future.

“Convincing parents has also been a large part of the hiring process,” explains Girish. “We invited the parents to the plant to see for themselves the safety measures in place. Once they saw that their children were in a safe environment with plenty of support, they were happy.”

Twenty-one-year-old Vinita Maiyatra joined HCCB when the factory was set up. She has a diploma in Chemical Engineering from Bharuch Polytechnic and looks after the operations, maintenance and troubleshooting of the syrup room and TWP area.

“It was always my dream to work on the shop floor. Also, here I get the opportunity to learn functions in other departments too,” she says.

Vinita also tells us that she has always been in a minority until she came to HCCB.

“I was one of the three girls in a class of 120 in chemical engineering, the only girl in my department at the plant where I worked before. It’s wonderful to be part of a group of so many women here.”

Supriya Gupta has been working with HCC for the past year, and has had experience working with consumer products.

“My role here is of Plant Owner where I am responsible for quality assurance of syrup preparation which we do using a number of parameters,” she says, adding, “the best part about the place is the understanding and support of the peer group when it comes to shifts. Also we have in place, women as security guards who continuously make sure that we feel safe in the premises.”

It’s wonderful to see the ease with which Kinjal Mehta operates different machines. The 24-year-old holds a Diploma in Engineering from Gujarat University in instrumentation and works on the entire triblock machines.

“An extensive three-month training period at the Vijayawada plant ensured that we learned the complexities of the machines inside and out. I was there from the installation of the factory and have literally seen with my own eyes, how machine were set up. It’s an exhilarating feeling,” she says.

While the HCCB factory was conceived with diversity and gender inclusivity at its forefront, Girish explains,

“When we set out to hire talent, we kept in mind that it should be in the ratio of 50:50. It’s at 60:40 now, based on the availability of talent. We hired both men and women through different campus drives in Gujarat. We also carried out studies on the mentality of the parents in the area towards their children working in shifts. We tried to understand the prerequisites when it came to infrastructure so that they could be part of the plan in the construction stage itself,” he says, going into the details of how this was made possible.

“We are the first factory in GIDC to operate on a three-shift system, and when we presented our case to the Director of Factories, he was very encouraging, and the approvals were given quickly,” Girsh points out.

Apart from the benefits mandated by law, the HCCB factory in Sanand offers additional perks to its women employees. For those working late and on the night shift, it offers them transport to and from their homes. The process is monitored by calling every woman employee to ensure she has reached home safely.

The factory boasts of a crèche on the grounds to look after the children of employees. The Internal Complaints Committee represented by employees across all departments meets every month, while a half-yearly skip-level discussion is held to ensure that even the smallest of problems is taken care of. There is also an Occupation Health Centre, on the premises, apart from 58 CCTV cameras covering the 46-acre plant.

The story of pride and self-belief is not just that of Simran, Kinjal, Supriya or Vinita alone… it is also that of Pratima, Pooja, Nirali, Asha – of all the 34 women who are working hard not to prove that they are better than men – but to reinforce the faith they have in their abilities and work hard towards a promising future.

Some have changed family mindsets, while others have helped raise their family’s standard of living. There is an innate sense of pride in what they do. They don’t want to just stop here – they are planning to study further, work towards a promotion or just want to simply learn more on their job.

This is the kind of pride that conquers all.