Tablet screens in autorickshaws: how bootstrapped Trioo is changing gears for outdoor advertising 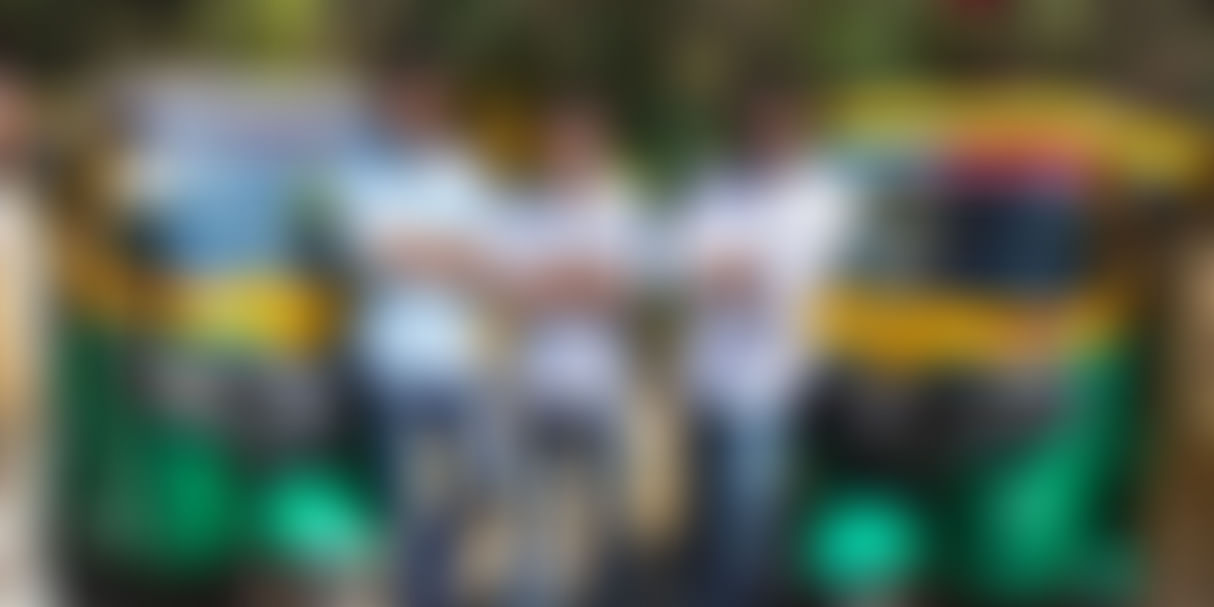 If Ola and Uber made our humble autorickshaws tech-savvy, this bootstrapped startup from Bengaluru is giving another facelift to the three-wheeled commute – this time with touch screen devices facing the commuter, with localised advertisements running on them.

A digital advertising platform in the local transportation sector, Trioo enables local businesses and brands to connect with commuters by advertising through tablet computers installed in auto rickshaws.

The founder trio started the company with Rs 10 lakh from their savings as well as from their former classmate at Christ University, Mohit Sadarangani, and mentor Rajesh Dangi, a technology evangelist and CTO of NxtGen Infinite Data Center.

Trioo set out to revolutionise outdoor advertising by digitising it, and make advertisements travel with the customers.

Siddharth explains, “Alternate outdoor advertising solutions were the need of the hour when Bruhat Bengaluru Mahanagara Palike (BBMP) banned advertisement hoardings in the city a few months ago. We are providing alternative public sector advertising, and the first step is via autorickshaws.”

Bengaluru’s auto drivers cover over around 5,000 km a day, with over 10 lakh commuters in a month. As a pilot, Trioo has so far installed 10-inch touch screen devices in more than 250 autorickshaws in Bengaluru so far.

According to the founders, the name Trioo was derived from the three pillars of Connect-Care-Commute, which is what the startup is all about. It also aims to make outdoor advertising in metro cities affordable.

Siddharth explains, “It costs about Rs 25 lakh for outdoor advertising in Indiranagar area in Bengaluru. We wanted to build an option that costs just two percent of it.”

“People travel for hours daily in metro cities. Instead of hoardings, their means of commute is a better option to catch their attention, and hence autorickshaws. Commuters are often bored at traffic blocks, and this will get their attention.”

Trioo also creates content including GIFs, design and outlay, proofread content, etc. for branding. Its clients include both online and offline businesses from across sectors, including retail in marble, automobile outlets, jewellery showrooms, salons (not chains like Lakme), and even mehendi artists. The ads shown are relevant to where you are boarding from and where you are going to.

Trioo charges 30 paise per impression (number of times the ad runs; each impression lasts ten seconds). You can also change the content daily.

“We are looking to automate the content updating, so that they can upload themselves (and we will do due verification),” says Siddharth.

Impressions range from 1,000 to three crore a day depending on the client’s needs. In the last eight to nine months, Trioo has earned about Rs 40,000 per month in revenue.

“Sometimes brands do big campaigns and position themselves for peak times (for impressions on Trioo). Say, if they want 25 lakh impressions in five days, we dedicate 50 autorickshaws for their content alone,” Siddharth explains.

He adds that some clients sign up for a year and boost their content according to seasonal changes. For instance, Diwali is peak season for fashion and lifestyle retailers, and February to April for educational institutes.

Trioo provides monthly and weekly reports to its clients with statistics on impressions, number of views for their campaign, commuter’s destination, etc. In case Trioo is not able to achieve the targets on impressions, that period will not be charged, and they will do it again for the same duration.

The startup also supports emergency services like blood donation, social campaigns, etc. Currently, it is working with the Karnataka government to empower auto drivers with subsidised insurance policy. (In return, Trioo will run free content for the government - any emergency messages or public notices.)

In the initial days, the founders say they talked to autorickshaw drivers themselves about the advantages of having this service, like getting an additional income.

Although the basic monthly commission is Rs 500, Siddharth claims that there are drivers who have earned Rs 10,000 to Rs 15,000 a month. Also, if the drivers can manage to drive a conversion, about three to five percent of Trioo’s payment (from the client) will go to the driver.

In its initial days, Trioo used to pay the commuters’ charge just to get feedback.

“According to the customer response, we increased the frequency of ads, from twice an hour to three-to-four times in 20-25 minutes, as that is the average commute time in Bengaluru,” Siddharth tells YourStory.

The drivers also record details, including the commuter’s gender, area of pick up, and the number of trips on the Trioo app installed on their phones. This helps Trioo with understanding their customer base and strategize accordingly.

However, Siddharth clarifies that the commuters’ privacy is shielded, as these details are not shared with the clients.

Over the last five years or so, ads for local people via public transport has been a trend in Japan, China, and the US. Siddharth believes that this will be the next big thing in Indian advertising too. But the mindset of traditional enterprises is a challenge to overcome.

“A large number of hoardings does not mean a lot of visibility for your brand. Even those placed strategically cannot guarantee that a high number of people see it. But traditional enterprises, especially the non tech-savvy ones, think of it as an essential strategy. It will take some time to change this mindset,” Siddharth points out.

Trioo currently uses iball’s Tablets from China. Since brands give discounts/deals only for a minimum of 20,000 devices, Trioo has not tied up with any brand yet.

Although it costs around Rs 8,000, Tablets have a shelf life of seven to eight months. Siddharth says that Trioo minimises this cash burn by paying off three to four auto rickshaws with commission from just one client.

To ensure the Tablet works constantly, a metal frame is placed behind the driver’s seat, which also charges the device.

Trioo is also piloting with some taxis (those not attached to Ola and Uber) and plans to expand soon. The company’s current focus is on growth. Siddharth says, they will take about four years to achieve profitability.

As a B2B enterprise, Trioo is not spending on marketing, as its work is direct advertisement.

Trioo is currently investing its revenue back into the company and is yet to break even. “We are focusing on growth at the moment. Although there have been offers for acquisition, this is an unexplored sector, and we want to be independent,” Siddharth tells YourStory.

Pune-based startup Riky was similar to Trioo. It had raised Rs.1 crore earlier; but has been maintaining low profile of late.

Trioo is planning to raise external funding this year. Its target is to reach 50,000-60,000 autorickshaws and cabs in 2019. Siddharth adds that after raising investment, Trioo will expand to more channels – like Volvo buses, airports, flights, and BMTC bus stops.

“We are trying to provide customised service for different genres – in office spaces for internal communication, restaurants for e-menu, shopping malls, government platforms, metro rail. After Series B, we will expand pan Bengaluru and 15 more cities,” he says.

Now a team of 13, Trioo is also working on a touch screen feature so that customers can

make purchases from the tablet itself.

“We wish to be an affordable digital dissemination platform, not just an advertising platform. Content is the king today, and we will soon introduce entertainment content in addition to advertising,” Siddharth says.