Game of brands: how these Indian brands are banking on the Game of Thrones fever 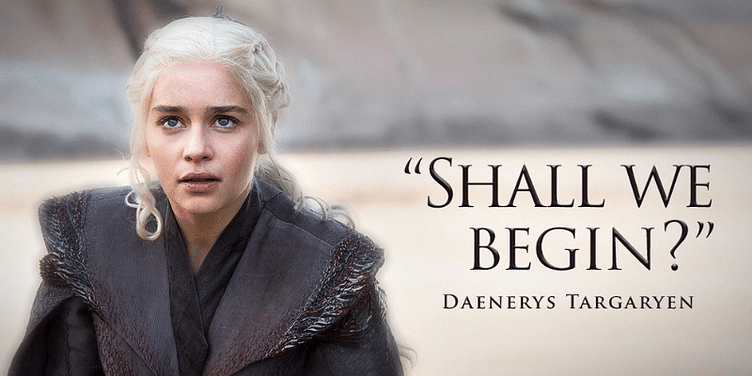 From fashion to food, these Indian startups and brands have devised quirky ways to cash in on the fan-following and fervour surrounding the popular HBO fantasy drama Game of Thrones.

Dany and Jon are finally in Winterfell, Queen Cersei has rolled the dice for the throne, Arya is definitely on to something, and [spoiler alert] Sir Jamie has come face to face with Bran Stark, bringing life to full circle! Just in case you haven’t noticed, the Game of Thrones (GoT) fever has officially caught on, especially in India.

According to Instagram, India ranks #1 among all other Asian countries when it comes to the GoT frenzy. Such is the love for the Thrones that Indian fans of this slow-burning American series have surpassed global fans to score the fourth spot on Instagram’s list. From conspiracy theories to ‘who is going to die this season’, you name it and we have an answer for it.

It’s not much of a surprise then that many brands and startups in India have also jumped in to make the most of the GoT fever - some of them might even surprise you.

Ice Creams are coming! Always a step ahead with quirky and eye-catching campaigns, Zomato has outdone itself this time with a Game of Thrones-inspired section on their app called, ‘Game of Cones’. If you haven’t already guessed what it’s all about, allow us to break it down for you.

The stylised section takes you to a list of the best ice cream joints in your city. Speak of timing and brilliant campaigning! It hits the nail right on its head, appealing to the emotions of the thousands of urban millennials who are both fans of GoT and the online food delivery app. After all, who doesn’t like ice creams?

What says Westeros more than the house sigils and iconic quotes? Over nine years and eight seasons, Game of Thrones has weaved a universe of its own, inspiring many fashion trends in the process. And with the last and final season underway, it only makes sense that brands bank on the Westerosi fashion quotient as well. Walmart-owned Myntra is doing exactly that with its GoT-inspired Kook N Keech line, which includes a wide range of tees, sweatshirts, and more.

To make things a little more interesting, Myntra lists all these under a special Game of Thrones section with a cheeky caption – “Styles approved by the Old Gods & the New”.

Gaana and Game of Thrones

Not many shows open with a montage as striking and captivating as the HBO show. As the credits start to roll and the theme song plays, a name pops up – Iranian-German composer Ramin Djawadi – that fans have since come to associate with the rich music and background score of the show. Djawadi’s music has not only made the show’s soundtrack memorable but also fuelled imagination for music streaming platforms like Gaana.com.

Celebrating the premiere of the eighth season, Times Internet-owned Gaana recently came up with a GoT-special section. It includes playlists like the Wild & Woolly, Dragon’s Den, Afterlife, Powerplay, Loyal Ones, and Brotherhood, paying tribute to the show’s iconic characters like Khal Drogo, Daenerys Targaryen, the Lannisters, the Starks, and even the Night King.

If Zomato is getting on the GoT frenzy, can Swiggy be far behind?

Just a day before the premiere of the much-awaited final season, the Bengaluru-based foodtech unicorn took a creative approach to let the world know that they are always on their toes when it comes to delivering good food at your doorsteps.

“Some good things take 2 years to come. Some good things take just 30 minutes,” came a cheeky tweet from the company’s official Twitter account, making a reference to the long gap between the current and the previous seasons. Along the post, the startup shared a stylised image reading, “Dinner is Coming”. Rings a bell, all you fans?

Uber Eats did not want to be left behind. If you are a fan of the millions of memes that the show has inspired since it first went live in 2011, you might want to keep an eye on the company’s Twitter account. Keeping in tune with the developments in Winterfell, Uber Eats shared an icy cold post, promising, “GIFs are coming.”

All your wishes fulfilled right from your throne. We've been delivering through Fire and Ice since 2007. pic.twitter.com/jXg3aVLZmy

Against all odds, the poster child of Indian ecommerce, Flipkart claims, “We've been delivering through Fire and Ice since 2007.” Those who have read George R. R. Martin’s A Song of Ice and Fire, the book series, which inspired this cult show, would know it in a heartbeat that the company is referencing the book’s many pivots around the theme of “ice” and “fire”.

The GoT theme is evident on the Flipkart app as well, where the Walmart-owned company has introduced sections along the lines of “Game of Shopaholics”, “Your Watch Begins Here”, “Game of Gadgets”, and more. Everything stylised to fit the look and feel of the drama that has the entire world enamoured!

As winter arrives, which way are you going? Ice creams or memes, or both?

Also Read: The 10 best quotes by women in Game of Thrones that will fire you up to take on any challenge