What is Tipline on WhatsApp? Facebook company launches service to check facts in election season 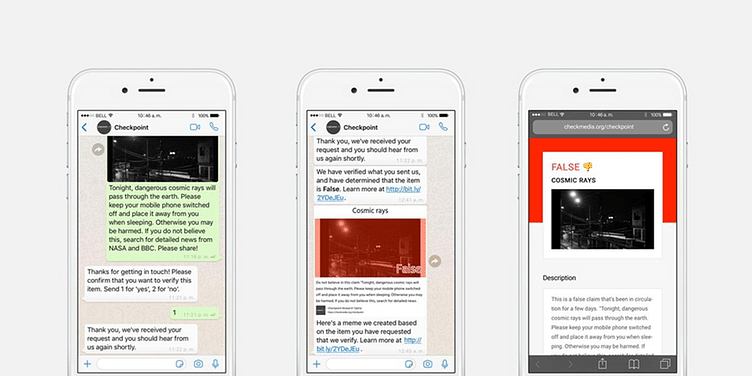 Now, you can ask Whatsapp 'tipline' if any information is true, false, misleading, disputed or out of scope.

WhatApp has so far been running campaigns across newspapers, television, and radio to alert Indians to identify misinformation and curb the spread of fake news. On Tuesday, the Facebook-owned company unveiled a brand new initiative, called Checkpoint Tipline, that will help people verify if any information they receive is true or false.

Launched by PROTO, an India-based media skilling startup, the tipline is basically aimed at creating a database of rumours. The idea is to study misinformation spread ahead of the upcoming elections for Checkpoint, which is a research project commissioned and technically assisted by WhatsApp.

Said WhatsApp in a statement:

“The response will indicate if information is classified as true, false, misleading, disputed or out of scope and include any other related information that is available."

The verification centre, in turn, will be able to review rumors in the form of pictures, video links or text. Apart from English, it will cover four regional languages - Hindi, Telugu, Bengali and Malayalam.

Also Read: Want to protect your chats? This WhatsApp feature will add an extra layer of security

This is not the first time the global messaging platform has tried to filter the barrage of information exchanged every day by billions of users. In the aftermath of a series of mob-lynching incidents following misinformation spreading on WhatsApp, the company is now taking stringent steps in the lead up to the 2019 general elections in India.

It has also undertaken many efforts to battle fake news, including the five-forward limit, social campaigns, and the latest – a ‘Tipline’ for misinformation.

PROTO, which is developing the verification and research frameworks for India, will be joined in this cause by Dig Deeper Media and Meedan. The two organisations already have experience working on misinformation-related projects around the world.

"The research from this initiative will help create a global benchmark for those wishing to tackle misinformation in their own markets.”

He added, “This is also innovation in verifying data around elections in a way that is accessible to those who need it in exactly the place they need it."

Also Read: Two new features from WhatsApp will help you track messages that are "popular"