Meet the Mavericks: how discipline and focus helped this co-founder make UrbanClap the market leader of an ‘unsexy category’ 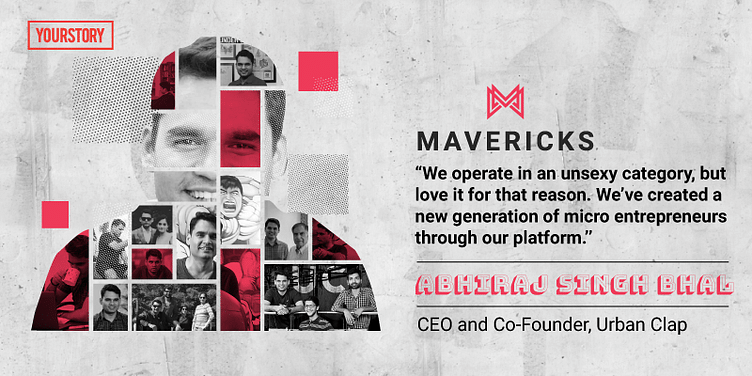 Keep your eyes on the prize. YourStory’s video series Mavericks gives you insider access into the lives of some of the country’s most successful entrepreneurs. In our third episode, we deep-dive into a discussion with the co-founder of one of India's largest on-demand service providers.

Abhiraj Singh Bhal and his Co-founders, Varun Khaitan and Raghav Chandra, were no strangers to the startup world before they started UrbanClap. Back in 2014, they realised that on-demand services was a huge, fragmented market with several possibilities, but there were several obstacles in the way.

Globally, the online, on-demand home services market is expected to grow at a 52 percent CAGR between 2018 and 2022, according to a report by TechNavio.

And despite the challenges surrounding standardisation of on-demand services, the lack of consistency, and customer complaints, the trio realised they had chanced upon the opportunity to revolutionise the flagging sector, with the right technology.

“Great organisations are built to last, not built to sell; that’s how we think of UrbanClap,” Abhiraj says.

Five years after they launched the “urban lifestyle services platform”, the three are well on their way to creating a household brand, which is growing 3x every year and reaches 6.5 lakh homes every month through 20,000 service partners.

UrbanClap, which plans to go public in the future, is also present in 10 Indian cities and Dubai, and aims to expand to Tier II and Tier III cities as well as internationally in the coming years.

Abhiraj and Varun have known each other for years, ever since they graduated from IIT-Kanpur together. The two would discuss startup ideas and even launched Cinemabox, a service that allowed travellers to stream movies on their phones in planes, trains or buses, in early 2014.

The startup shutdown within six months, but Abhiraj and Varun didn’t give up. Around that time, they met former Twitter engineer, Raghav Chandra, through mutual friends. Raghav’s first venture, Buggi, an on-demand autorickshaw hailing platform, shutdown soon after its pilot.

The three connected and had a few months of intense conversations, after which Urban Clap was born. Despite foraying into the market without a good idea of what to build or how to build it, Abhiraj knew that the demand for these services was large, fragmented, and would benefit with technology.

“We certainly didn’t have a game-changing idea,” Abhiraj says.

However, after interacting with a lot of service professionals, the founders realised that a number of these repairmen, beauticians, and masseuses were usually at the mercy of middlemen, who ate into significant chunks of their margins. Customers were also complaining about a lack of standardisation in terms of quality and punctuality.

“I think the interesting thing is that it is a very unsexy category - pardon my French - because it takes so much to get your hands dirty. So, the competition typically shies away from it,” he says.

Yet, investors believed in their growth story. In 2015, Urban Clap raised $1.5 million funding from SAIF Partners and Accel Ventures. The company has raised a total of $110 million in five rounds since then.

Peeling back the onion

Once the trio dove into the business end, Abhiraj, Varun, and Raghav discovered it was an extremely long and challenging process to bring service professionals onboard. UrbanClap had committed to verifying professionals, both on their background and skill set, before allowing them to offer their services on the app. This way, only 20-30 percent made the cut.

“It was extremely complex  because on one hand you are pitching to people, saying come and join the platform, and then on the other you’re telling them that ‘hey, you’re not good enough’,” he says.

A year after launch, Abhiraj and his co-founders noticed that the quality of the services they were providing was not up to the mark. Urban Clap’s “light-touch” model, where the company didn’t insert itself in every aspect of the customer service, was clearly not working out.

They asked themselves a simple question: why did we get started on this journey?

“We got started because we wanted to deliver amazing and high-quality services. We felt people should rave about the UrbanClap service,” Abhiraj says.

The startup decided to focus on one category to understand what it would mean to own the service delivery experience. They chose beauty, which offered an interesting challenge.

The company developed close integration with the supply ecosystem, which runs on various levels. UrbanClap condensed its service delivery experience into five levels, to make it straightforward for customers and professionals. This, Abhiraj says, has become their biggest competitive advantage.

UrbanClap controls the products that their professionals use, from makeup remover to jet sprays. It has also revamped its payments process to make it more flexible for customers and professionals to pay and collect money.

The company has also set up a content sharing platform to allow customers to share reviews and rate service professionals easily. UrbanClap also functions as a convenient marketing platform for its professionals, and has implemented a strong customer relationship management platform, to catch issues quickly.

“It took us two years to perfect this five-level model - it wasn’t overnight. It was literally like peeling the onion - one step at a time.”

The company has grown by leaps and bounds since then. UrbanClap’s financial results showed that it posted a 150 percent jump in operating revenue to Rs 116 crore in FY19; more impressively, the company managed to keep operating losses flat at Rs 72 crore.

Besides beauty services and appliance repairs, the company has also made progress in verticals such as pest control, cleaning, and painting.

Simultaneously, the startup is helping create thousands of micro-entrepreneurs. Unlike offline players, Abhiraj says, the company allows service professionals to keep about 80 percent of what a customer pays, allowing them to earn decent livelihoods.

By focusing on the service professional as well as the client, UrbanClap has managed to take a significant chunk of market share away from both offline and online players in India.

Now their challenges are more on the lines of scale. UrbanClap is on-boarding between 2,000 and 3,000 service professionals every month. They run over 100 training sessions simultaneously across the country, and only plan to grow from there.

“If we can become synonymous with home services, so that when anyone needs a service at home, they say just ‘UrbanClap it’,  that would be great,” Abhiraj says.

Getting your hands dirty

Now, Abhiraj regularly shadows his service professionals and sometimes turns up at customer’s homes to oversee the process. A firm believer in “getting one’s hands dirty”, Abhiraj will happily pitch in and help customers - once even going out of his way to wash a client’s car.

He’s also a gym rat who enjoys pushing himself to the limit with punishing CrossFit workouts, is unsurprisingly a big fan of record-breaking sprinter Usain Bolt, and lives by his credo: the race is the easy bit, but putting in the consistent training and hard work every day is the tough part.

That ethos of hard work was probably drummed in, courtesy his military officer father. Abhiraj’s upbringing also instilled a love for the outdoors - his last trip was to Pench National Park, a tiger reserve that cuts across Madhya Pradesh and Maharashtra, and was reportedly the setting for Rudyard Kipling’s The Jungle Book.

“I like my vacations to be activity-based,” he says.

Abhiraj is an adrenaline-junkie, who enjoys the rush from activities such as sky diving, trekking and scuba diving. In fact, he and Varun completed an accelerated free-fall course that allowed them to do solo sky-diving anywhere in the world.

“For me, simplicity in lifestyle, discipline, and regimen has worked; it has kept me sane and on track in this journey,” he adds.

With that discipline, Abhiraj expects that UrbanClap will reach 50 million homes a month and have one million service partners within four to five years.

As for Abhiraj’s next Maverick Move?

“So far, UrbanClap has catered to the upper end of the society. We are now actively looking at making our services more affordable and available in Tier II and III cities. At the same time, we also want to expand to other cities internationally. We’re already in Dubai, we’re looking at a couple of other cities as well,” he says.

Meet the Mavericks: this co-founder and entrepreneur discusses his riskiest bets, handling setb...