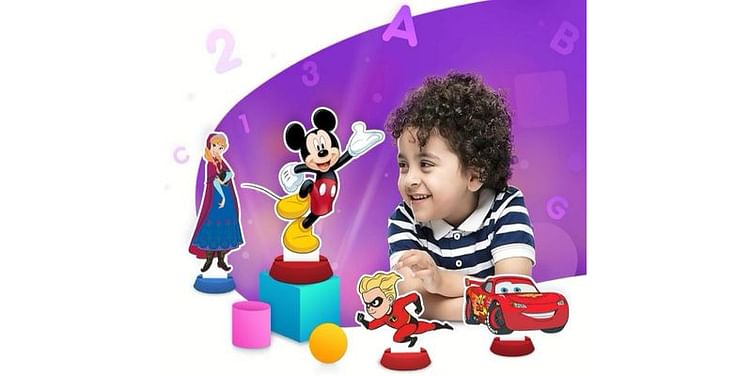 BYJU’s, India’s most valuable edtech startup, recently launched Early Learn in partnership with Disney India. Within a month, the app has recorded half a million downloads.

If you’ve been tuning into the ongoing ICC Cricket World Cup, you would have noticed an all-new set of BYJU’s ads starring brand ambassador Shah Rukh Khan. It is possibly the edtech unicorn’s first marketing burst for its new app Early Learn, developed in partnership with Disney India.

You see really young kids being wooed by their parents with colourful characters and stories, and Khan, in his trademark charismatic style, going: “When we make early learning fun, we make them better learners for life.”

This is exactly what Early Learn (as its name suggests) offers - fun and engaging learning for kids aged between 6 and 8 (Classes I to III). It exists as a standalone app (along with the BYJU’s app for students in Classes IV through XII).

The app’s main aim is to help parents build a strong foundation in basic concepts for their kids. Be it numbers, words, data, or logic, every lesson is designed to create a “magical” learning environment. Customised smart learning journeys adapt to every child’s individual learning pace and patterns.

An Android-only app for now, Early Learn was released on Google Play Store in the first week of June. It has already notched up over 500,000 installs in a month. Rated 4.6 out of 5, the app has also broken into the top 5 of the ‘Education’ category.

According to the app's Play Store listing, it is “built on the content expertise of BYJU’S, enhanced with Disney’s engaging stories and beloved characters.”

Early Learn also offers digitally enabled worksheets that encourage kids to “learn by doing” (hands-on practice).  There is a robust reporting system for parents too, which lets them track their kids’ live progress.

First, you log in. Then, enter your child’s name and select class.

The app asks for your location and email in the next step. This is not really required because all courses and programmes are pre-fed into the app. Hence, the location doesn’t add much. The email, of course, comes in handy if you become a paid subscriber.

You’re prompted to re-confirm your child's learning level on the next page.

As you enter the app’s richly imaginative world, choose your favourite Disney character. That becomes your child’s profile icon in the learning journey, and also dictates games, animations, and so on that are displayed to them.

So, if you select Winnie the Pooh, for instance, you’re treated to visuals, videos, animations and sounds of forests and other places that define the world of Pooh and Piglet. BYJU’s reckons if lessons are designed this way, it helps pique a child’s curiosity, increasing engagement and attention.

Then, you land on the homepage. Unlike most apps, Early Learn’s homepage comes with an endless horizontal scroll. Your device automatically switches to landscape mode as you start using the app.

Lessons are listed under categories: All about Numbers, Fun with Letters, Types of Nouns, Adjective-Linkers, Verbs & Sentences, Time & Tense, etc.

You choose a lesson for your kid. Every lesson has two parts: an animated video (passive learning) and an interactive game (active learning).

Your child picks up rewards (additional stickers, backgrounds, etc.) and badges on completing a lesson.

After every lesson, you’re taken back to the homepage. On the bottom right of your screen, there is a ‘Library’ icon. The library allows parents to select ‘Chapters’ from across categories.

You can also group your child’s ‘Favourite’ learning videos and games. It is a bit like creating a YouTube or Spotify playlist.

You go back to the homepage and hit the ‘Parent’s Corner’ icon to access your child’s profile, track their learning progress, and make payments.

The first tab is ‘My Account’, which stores parent info and profile details. You can also add/delete more than one ‘Child Profile’ on the app - a feature that is bound to delight parents with more than one kid.

The ‘My Child’ tab acts as your kid’s report card giving you a glimpse of lessons learnt, proficiency reached, compliments and badges earned, etc.

Essentially, if your child can use the app on their own, you only need to look at this section to monitor their progress.

And, finally, the Payments tab takes you to a subscription page. The plans are not listed on the app, but you can call on a listed number for further enquiry.

Early Learn is for those parents who’d been lamenting the absence of a fun and interactive learning app for their very young children.

Since the original BYJU’s app caters to middle- and high-school kids, classes I-III was a segment that needed a compelling product. It is safe to suggest that Early Learn manages to fill the gap quite well.

We don’t know about kids, but we were highly engaged on it, with average sessions lasting 30-40 minutes. The app can charm — and calm — even adults, who are likely to have been Disney/Pixar fans while growing up.

Perhaps they still are? For them, minutes spent on the app is like watching an animation movie.

For kids, Early Learn spurs activity and practice. Its attractive sounds and imagery, smartly crafted lessons, and the warmth and familiarity of timeless Disney characters are all steps in the right direction. It wouldn’t surprise us if BYJU’s next 10 million users came  from Early Learn.

Several parents have already taken to Play Store to stress upon the “the storytelling” and creative aspects of the app that make it vastly different from other offerings in the space. “Such a joy for my five-year-old to learn. I have tried so many apps, but she herself selects this app now,” wrote a mother.

It’s still early days for Early Learn, but don’t be surprised if it goes on to achieve the same virality that BYJU’s has!