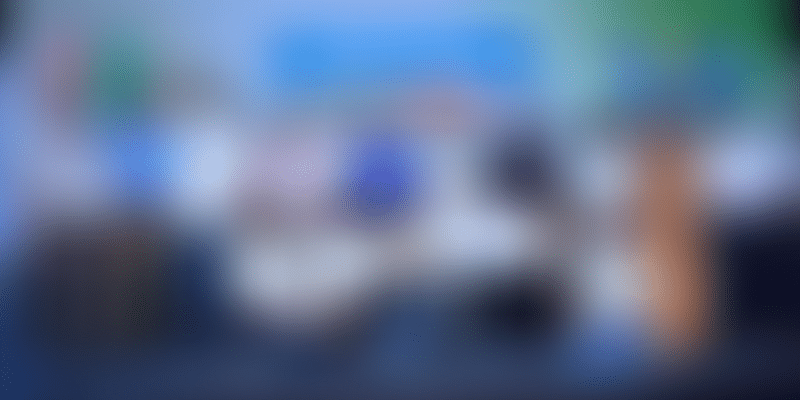 The clinical importance of a patient’s weight cannot be emphasised enough. Weight determines the dose of medicine that would be ideal for a patient; in certain cases, too much or too less a dose of drugs and dye can be fatal.

This is where an innovation by a group of biomedical engineering students from Sri Sivasubramaniya Nadar (SSN) College of Engineering in Chennai comes to the aid of doctors.

The group, called Team Bioses, has invented a handy weighing machine that calculates the weight based on body dimensions. In scientific terms, it is called the anthropometry. Costing as less as Rs 400 per unit, Team Bioses hopes that the machine will soon be used in in hospitals.

The team recently won Rs 1 lakh at Smart India Hackathon 2019, a competition for which the finale was conducted simultaneously across 18 nodal centres in India.

“All it does is measure the circumference of a patient’s arm and the length from knee to foot. With this, the device is able to project the patient’s weight,” explained Arvindh Swaminathan, a member of the team.

Most hospitals do not have the current weight of the patient but an estimated value or slightly older values. And this has quite a few risks involved. Improper dose comes with a risk of other conditions such as causing a clot in the blood, which consequently cuts off the blood circulation in the body, haemorrhaging, etc. These often end up being fatal.

The birth of an idea

The group researched extensively about the human body, including muscle mass and bone mass measurement, before it finally settled on the idea that anthropometry could calculate the weight of the body.

They found that in Africa and other third-world countries, the concept of anthropometry is already applied to ascertain whether a person is malnourished and the extent of the malnourishment. The process is conducted manually.

But the team wanted a simple, automated, and easy-to-use device that can be operated by anyone. In order to develop an automated machine that would also be compatible with magnetic resonance imaging (MRI) scans, they opted to use IR sensors, among other options like laser and ultrasound.

Members working on the project include Vaishali, Jagadesh, Ananya, Kezia Sharon, and Kavya Vijaya Kannan. They claim that the device is all set to change practices in healthcare systems across the world.

They tested the device on around 500 people in Chennai, which also included patients from a few hospitals. The result showed variations of not more than three kg. For a more accurate test, Arvindh and his team wants to collect data from people belonging to other geographic and ethnic backgrounds.

Soon, they hope to see patients in critical conditions such as those in a coma benefit from this technology. A disclosure for patent has already been submitted. Team Bioses believes it can be easily adopted, as the device will be affordable at Rs 400 per unit and once bought, the machine consumes less power. They hope to make further improvements on the product.

Currently, it takes about 10 seconds to set up and the time taken to get the measurement depends on the patient. Hence, they are working on minimising user interference.

Emphasising on the ease of use, Arvindh says,

“The process and installation of this device are of low cost and so is the maintenance. It can even be installed in rural areas without much difficulty. It does not require hospital beds to be modified and is not influenced by the dynamics of the bed.”

The group of students had spent around Rs 1500 and the prototype presented at the hackathon works fine but the team says it needs more work. The biggest roadblock the team faces is the product design which, it believes, is important to complement the ‘easy-to-use’ feature. They hope to make it more compact and lighter in the next iteration.