[App Fridays] With Notebook, Zoho is taking on incumbents Evernote and OneNote fair and square 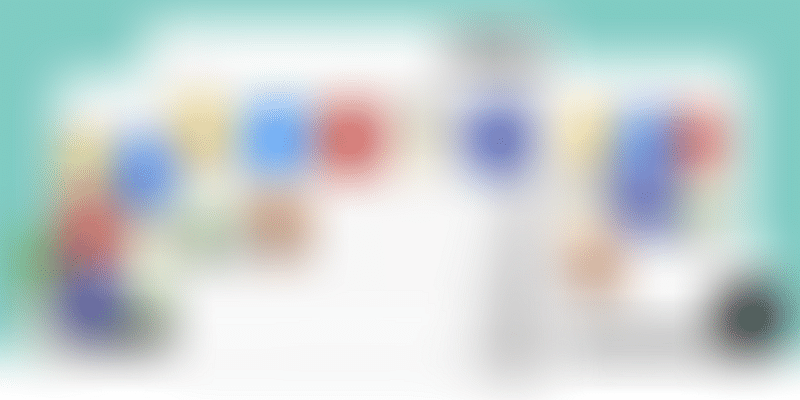 Chennai-based SaaS unicorn Zoho has built an exciting alternative to some of the most seasoned note-taking applications. Zoho Notebook has already crossed a million downloads and is available on all platforms for free.

In an increasingly “happening” world, where humans operate almost like clockwork, productivity apps have gained enormous popularity. These apps, often described as the “antithesis of social media apps”, help users manage their time better, and perform tasks in a quick, efficient, and organised manner.

Zoho Notebook is one such app that is currently featured in the Editor’s Section of Google Play Store. Not only is it a top productivity app, it also won ‘Google Play Store’s Best App of 2017’ award.

Notebook has emerged as a fine alternative to Evernote, Google Keep, Microsoft’s OneNote, Apple Notes, and a bunch of other note-taking apps. It is entirely free, and even ad-free. Unlike its peers, Zoho Notebook has no premium nor do hidden features need unlocking with a subscription.

This makes it one of the most democratic note-taking apps out there.

It is ubiquitous too. Notebook is available on Android, iOS, Mac, Windows, and even as a web clipper on Chrome, Firefox, and Safari. You can also log in to its website to view and add notes. All notes can be synced across platforms and devices.

The app has recorded over a million downloads and has a Play Store rating of 4.5 out of 5.

Zoho makes no bones about the fact that Notebook was developed as a free alternative to Evernote, which has been around for more than a decade. But, the Chennai-based software giant, which is known for its sophisticated enterprise tools, has crafted Notebook in a simple and user-friendly way.

The app is minimalistic, has a beautiful interface, comes with almost no bloatware, and makes the online note-taking experience quite close to a real, pen-and-paper one. Imagine being able to clip notes together with a finger gesture? Notebook allows that too.

You can even choose from a selection of 30+ covers designed by Zoho’s in-house artists and categorise (Travel, Books, Ideas, etc.) notebooks to make them resemble physical notebooks.

Notebook also allows users to doodle and sketch, record voice notes, and add web clippings on it. Each note can be a mix of cards: video, audio, photo, text, doodle, files. You can change the background colour, text size, and font too.

If you do not have a Zoho account, you can sign in with Gmail. Or, use the app without signing in. (In that case, cross-syncing of notes is not possible.)

Next, you’re taken to the app’s homepage, which is clean and non-fussy. There is a mini tutorial Notebook to begin with. The bottom of the homepage displays the types of Note Cards that can be created on the app.

To create a Notebook, hit the + icon on the top right of the page.  Every notebook title and cover can be customised.

To start taking notes, hit the pen icon on the bottom bar. A blank page opens up. You can change the background colour of the page, adjust fonts, indents, and formatting, add quotes, blurbs, highlights and hyperlinks, and also create audio notes, checklists, images, or sketches.

Text Cards can hold each type of note format, allowing you to mix and match your inputs. For instance, one Note Card can contain a checklist, an audio, and an image. This makes Notebook more flexible than most other apps.

Notebook even allows you to scan documents, business cards, and add videos from your device.

All Notebooks can be accessed through the sidebar menu. Note Cards can also be moved across different notebooks. This means you can create notes arbitrarily, across formats, and organise them as per your convenience.

You can delete notes too. And unlike most note-taking apps, Zoho Notebook lets you recover deleted notes from Trash. This is particularly helpful.

Sketch Cards can unleash the child in you. It turns the app into a scrapbook. You can doodle, scribble and draw pencil sketches. There’s a highlighter tool as well as options to change colour gradients. Notebook also has Apple Pencil support.

Finally, in Settings, you turn on Dark Mode, sort Notebooks, customise shortcuts, and even enable Zoho’s smart assistant Zia to use the app better.

Orgzit, a workforce productivity app for your team to track, manage and analyse information

Why Notebook may be a notch above the rest

Notebook is way more than a regular note-taking application. It is a part of Zoho’s expansive suite of business and productivity apps. So, if you create a Notebook account, you gain access to an office suite, a personal email account, a seamless integration with Zoho Docs, and more. Notebook also integrates with Zapier and Zoho Flow to connect with a 1,000+ apps.

Solely as a note-taking app too, it scores on design, simplicity, utility, versatility, and pricing. By making all app features available for free, Zoho has naturally made Notebook more viable than OneNote, Evernote, and others.

Not only business professionals, Zoho Notebook is an appealing proposition for students too. It lets them record entire lectures, scan reference books, and even take handwritten notes.

Zoho says it wanted Notebook “to be a clean, beautiful, and inspirational space”. The app is already more than that. Just head to its website and hit the ‘Migrate from Evernote’ button!