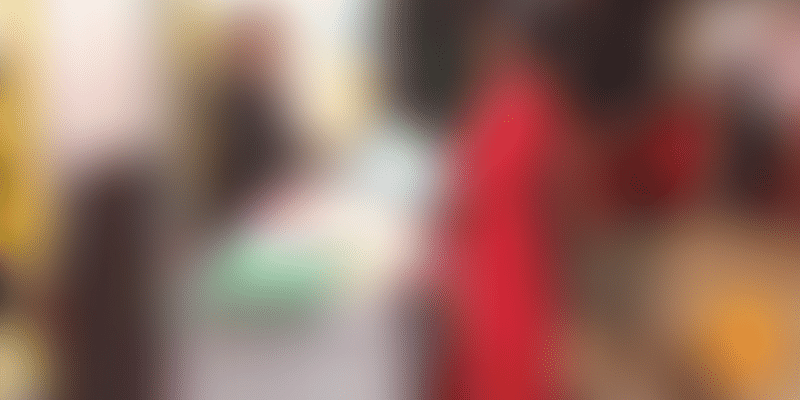 Started in 2017, Bhagalpur, Bihar-based Bhashabharat is looking to popularise and promote traditional textiles, designs and crafts from weavers and craftsmen from different parts of India.

Recently, Bollywood actor Kangana Ranaut travelled in style and made a simple Jaipur cotton saree feel fashionable at an airport. While many might say who wears a saree to the airport, there is certainly something unique and different about our Indian weaves and looms.

For many decades now, Indian handlooms have been known for their richness, exquisiteness, and fine quality. Handlooms also form the largest cottage industry in the country, providing a livelihood to millions of families. Yet, many of these traditional weaves and prints aren’t easily available to customers across the country.

It is to change this that Shashank Kumar Pandey (31) and Bhavana Misra (50) started Bhashabharat in 2017 in the country’s silk capital – Bhagalpur, Bihar. It is an online platform that promotes and sells traditional handlooms and handicrafts from weavers and craftsmen from different parts of India.

“Bhagalpur is known for its silk and textiles. Having been born and brought up in the city, I knew the kind of work and craftsmanship available not only in my city but across Bihar. And yet, these hardly had the power of reaching a vast number of people,” says Shashank.

The platform offers a range of apparel including sarees, dupattas, kurtis, and jackets, and also sells home décor items such as Gond art paintings.

Currently, the startup sells an average of over 100 sarees per month. Shashank says it depends on the season, and can range from 50 sarees a month to 100.

[Startup Bharat] Why these techies quit their jobs in Bengaluru to start Sikkim’s own Ola and U...

Hailing from a family that owns a textile business, Shashank, for most of his adult life, has been part of the family business.

During his interaction with different weavers, to his dismay, he realised that the industry was unorganised and difficult to crack into.

“Many of the weavers were leaving their traditional art and looking at other means of livelihood. Also, the market is highly unorganised and is ridden with several middlemen who cut a raw deal to these weavers. It was then that I decided to start Bhashabharat in Bhagalpur itself,” says Shashank.

To begin with, the startup started selling linen sarees, and will be soon sourcing Benares silks as well. The sarees are sourced from the weavers on which different kinds of prints are done.

“We have traditional Madhubani and Gond prints, and now more modern digital printing is being done from Mumbai and Delhi,” says Shashank.

At the moment, Bhashabharat has tied up with a total of 20 weavers in Bhagalpur and Rajasthan. It hopes to onboard at least 100 by the end of this year.

“Onboarding the weavers is a continuous process,” says Shashank.

Stitching together a team

Bhashabharat, however, is not Shashank’s first venture. Between 2015 and 2017, he had moved to Delhi-NCR to work his way into the ecommerce industry, trying his hands at several other businesses. However, things didn’t pan out.

“While Delhi-NCR is a larger city, setting up an initial business for someone from a small town is difficult. There is a lack of financing and capital, and everything becomes more expensive. So, when we got the idea of Bhashabharat, we felt it is best to start it from a region, which is the main source of the product,” he says.

It was during his research online and looking at different social media sites for designers that he met his Co-founder, Bhavana Mishra, on Facebook. A homemaker, Bhavana was also a designer and had posted some of her designs on the social media site. The duo got talking, and she decided to join Shashank as a Co-founder. Today, there are five members in the team.

Meanwhile, Bhavana’s husband, AP Mishra, has invested an undisclosed amount of seed funding to help the business. The initial challenge was getting tech and the backend logistics running. Hence, the duo hired freelance techies to build the website and backend operations.

“While the website was up and running, we wanted to first get a feel of the market, so we participated in several exhibitions and off-road shows,” says Shashank. He adds that to get the logistics running and perfecting the operations, it is best to understand what the consumer wants and needs.

It was also through one of these exhibitions that actor Padmini Kolhapure ended up buying one of their weaves.

According to government reports, the saree market in India is a whopping $12 billion, and contributes to over one-third of the total consumption of apparel and household textiles. Also, the unorganised market for handlooms, crafts, and foods is approximately Rs 1.7 lakh crore.

At present, Bhashabharat claims to be making an annual revenue of Rs 10 lakh. The startup keeps 20 percent from the revenue, and gives the rest to the weavers.

Today, some of the startup's competitors include companies like Jaipur Rugs, Industree, and Hoopoe on a Hill.

Speaking of the future, Shashank says, “We currently are looking to grow our team, add more weavers, and also raise funding. It is our endeavour to popularise traditional crafts, fabrics, and designs. We will soon be adding different forms of fabrics and styles.”