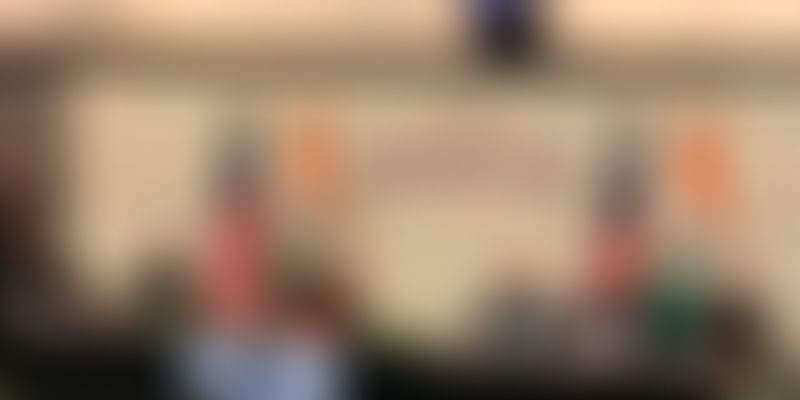 The American corporate world is eagerly hoping for the two largest democracies of the world to be able to hammer out a trade deal during Modi's US visit.

As Prime Minister Narendra Modi on Saturday landed in Houston -- the energy capital of the world, the American corporate world is eagerly hoping for the two largest democracies of the world to be able to hammer out a trade deal, differences over which has emerged as one of the major irritants in the Indo-US bilateral relationship.

"We are looking at real possibility of something being able to be announced on the margins of this visit," Nisha Desai Biswal, President of US India Business Council (USIBC), said in an interview.

The Prime Minister was accorded a warm welcome by members of the Indian community here as he arrived at the George Bush International airport for the mega "Howdy Modi" event in which he will be joined by US President Donald Trump and address over 50,000 Indian-Americans.

Working on the US Chambers of Commerce, USIBC represents top American companies having a footprint in India and has been advocating for a better and greater bilateral trade relationship between the two countries.

Indian and American negotiators have been working on this, Biswal said, adding that it is "long overdue" for India and the US to be able to resolve some of the issues that have been causing friction in the relationship and "start focusing" on the big picture what the two countries can do to boost trade and investment.

"So, I am hopeful that we will see something announced on the margins of this summit," said Biswal, who was Obama administration's point person for South and Central Asia.

Mukesh Aghi, president of the US India Strategic and Partnership Forum (USISPF), exuded confidence that the trade disputes between India and the US will be resolved by the time Modi and Trump meet in New York for the second time in three days' time on September 24.

"Absolutely", he said, when asked if some of the trade issues would be resolved.

"The gap is not that big. I am confident that by the time when Prime Minister Modi and President Trump meet in New York, a lot of the issues would have been sorted out," he said.

Modi addressing such a large number of Indian Americans in Houston has a significant value, Biswal observed.

Noting that Houston is the energy capital of the world and Texas probably has the second largest economy in the US after California, she said that the opportunity for advancing US-India trade is particularly significant.

During his visit to Houston, Modi will address an energy round table meeting with top CEOs of the gas and energy companies.

Houston also has a significant footprint in life sciences and aerospace.

The fact that Modi will address nearly 50,000 Indian-Americans along with the US president points towards the importance of India for America and vice versa, she said.