TechSparks 2019: Be unreasonable if you want success in life and business, says CK Kumaravel of Natural Salons 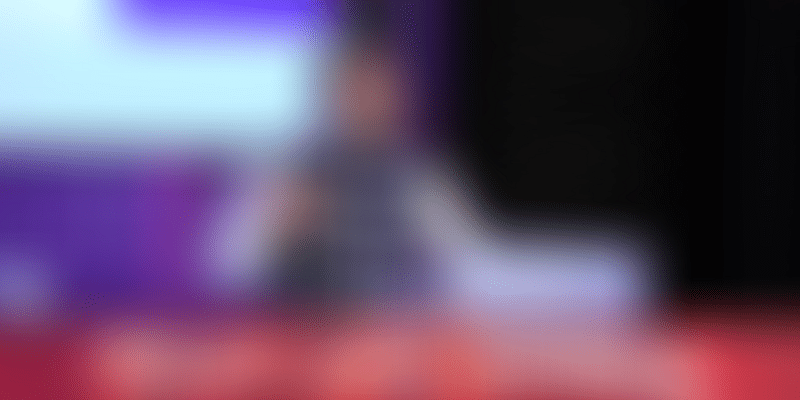 At TechSparks 2019, CK Kumaravel, CEO of Natural Salons and Spa, told the audience that irritation is the biggest source of energy, and often holds an opportunity. He urged people to root for more entrepreneurs, especially women and asked founders to ‘be unreasonable’ and think bigger.

Dreamers and doers came together at TechSparks 2019, YourStory’s flagship startup and technology conference. And CK Kumaravel, CEO of Natural Salons and Spa, roused many dreamers and aspiring entrepreneurs to cherish and work towards bigger dreams.

He cited a pivotal scene from the movie The Pursuit of Happyness. “The father (Will Smith) gifts a basketball to his son. And as the kid dribbles and tries to shoot the ball only to miss, he yells and tells the child that he should wait and grow up to be able to score. But the kid dribbles, shoots the ball again, and scores. The father puts his arm around the boy and says, 'Just because the world thinks they cannot, they will tell you that you cannot. But if you have a dream, go ahead and shoot it. Do not listen to this world’,” narrated Kumaravel, sharing this was among the few important lessons he had learnt.

The tenth edition of TechSparks, much like the preceding ones, revealed unseen sides of entrepreneurs and how they have picked up advice and inspiration along their journey.

To own an unsettling dream

Kumaravel shared that over the years he had seen many entrepreneurs “not reaching further” despite opportunities for growth “all around them”.

“While they are bringing great products to the market, these entrepreneurs are least bothered about scaling further. And on the other hand, the international brands are hungry to capture more of the market,” he added.

The likes of Mc Donald’s, Starbucks, Subway, and The Body Shop are all over India, Kumaravel said. He made one idea clear; it is not that India does not know how to make coffee but desperately needs to scale up what we have.

“If you are able to bring together a small company's ideas and dreams with a big company's scale, systems, and processes, that is where miracles happen,” Kumaravel advised to a resounding cheer from the audience. He called this one plus one equals eleven (1+1=11) effect.

Speaking about the lessons he learnt from his brothers CK Raj Kumar, Managing Partner at Sujatha Tech, and CK Ranganathan, Founder of CavinKare, he said the most important one was “If you want to be successful in life and business, be unreasonable.”

“A reasonable man adapts to the world but an unreasonable one makes the world adapt to him. And so, they are the ones to make all the progress in the world,” he added.

He emphasised the need for many Indian entrepreneurs to be “a little unreasonable” by taking the road less travelled.

At TechSparks, best defined as an entrepreneurs’ gala, Kumaravel was definitely one to keep the audience cheering on and on. Entrepreneurship is in his blood – his father, Chinni Krishnan, had invented the shampoo sachet, which made way to India Today’s list of 50 revolutions that changed India, post-independence. Ranked eighth, Kumaravel counts this as his most gratifying moments.

Aim for a million million-dollar companies

He also stated that more entrepreneurs mean employment for the 130 crore people in the country. “It is not on the government to create jobs. The government should ensure a positive environment for entrepreneurs,” he said.

He added that it was also extremely important to empower women entrepreneurs so they become financially independent. Revisiting the time when an affluent woman approached him to open a salon for a crore in Coimbatore, he said she called to thank him a year later when she earned Rs 50,000.

He said she told him: “At any given time, I'll have Rs 10 lakh in house, jewellery, and other things. But I have to account to my husband and two sons for any money I spend. This is my money and I can spend the way I want.”

He added, India will be truly beautiful when every woman gets to realise her dreams. Lauding the success of Shradha Sharma, Founder and CEO of YourStory, he said that more potential Shradhas are sitting back at home.

To look into what irritates you

Speaking on the start of his own businesses, he shared that one of the biggest challenges was identifying what to do.

“Irritation is the biggest source of energy. If you are irritated about something, look into it very carefully for therein lies an opportunity.”

He and his wife were irritated with the lack of good quality and affordable salons. At that time, they were only available in 5-star hotels, and often intimidating and unaffordable. At the other end of the spectrum were local beauty parlours and barber shops where hygiene was questionable. And the duo decided to delve into this irritation and start up.

When times were tough and the business didn’t bring in enough money, people around him said he was just not lucky. To this, he changed his mantra for luck – to him, LUCK meant Labouring Under Correct Knowledge.

TechSparks 2019: Your social media could make or break your funding attempts, Kunal Shah of Cre...