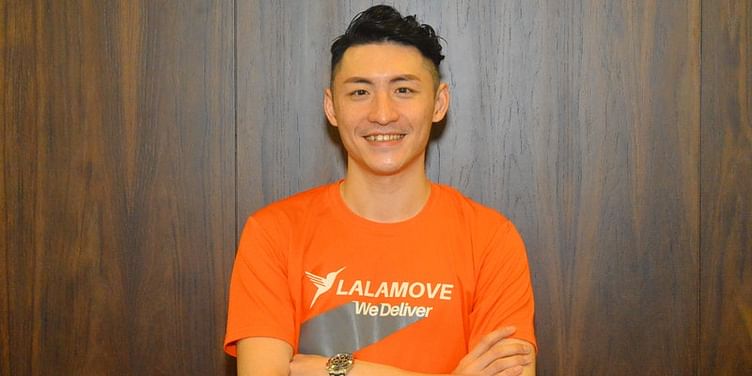 With $461.5 million in funding and over a billion dollars in valuation, Lalamove is entering India after making a mark in China, Hong Kong, Malaysia, the Philippines, Singapore, Taiwan, Thailand, and Vietnam.

Chow Shing-Yuk worked as a management consultant at Bain and Company for three years and started to meddle with poker after. Eight years into it, he turned a professional and won $30 million.

In December 2013, with a logistical need as specific as hiring vans and an intention to build an ‘Uber for deliveries’, he founded EasyVan, which was later rebranded as Lalamove. It catered to a specific logistical need: van hiring. In 2014, it expanded to Thailand, Singapore, Taiwan, and other cities in Southeast Asia.

As of today, the logistics startup operates in more than 180 cities across Asia and Latin America, and claims to have clocked over 15 million registered users with two million drivers.

Lalamove entered India in December last year, but started operations only a few months ago. Currently, it is present in Bengaluru, Delhi, Chennai, Mumbai, Pune, and Hyderabad. The app uses Google Maps API for navigation and tracking at the moment.

Though headquartered in Hong Kong, Lalamove is primarily anchored in mainland China under the name Huolala. The startup is also the first unicorn that was born out of Hong Kong. With a few play of words, Chow and his team were able to come up with Lalamove, which is derived from the Chinese word Lala - which means ‘to deliver’.

"In fact, ‘Just Lalamove it’ has become ‘the way’ to compel our users to trust us for reliable deliveries."

Today, Lalamove facilitates deliveries of all sizes for businesses and corporates (B2B), its primary target market, with the B2C segment up next. If one has to ship anything within a city, be it a document, a couch, or a food chain that wants to transport 50 plates of burgers, Lalamove does it.

In logistics, the intention is always to devise the most cost-effective and reliable method to transport goods. Technology brings in efficiency for last-mile delivery and reduces waste of time and resources as well.

Lalamove, which calls itself a logistics aggregator, enables both SMEs and individual users to push their goods across with single and multiple drop-offs, so that users can avoid making multiple bookings per delivery.

On the mobile app, users need to specify the type of delivery vehicle and mark the pickup and drop locations. A driver is then assigned by the platform to do the job. Nearby drivers receive lists of requests on the driver app, and can then deliver according to their convenience.

In November 2014, after 11 months of being founded, Lalamove raised $1.5 million in a seed round from Shanghai-based 01 Venture Capital. It also closed $10 million in Series A round in May 2016 with participation from The Aria group, Sirius Venture Partners, Mindworks Ventures, AppWorks, 01 Venture Capital, Crystal Stream Capital, Asia Plus, and GeekFounders.

In January 2017, it raised Series B funding of $30 million from Xianghe Capital and Black Hole Capital, while MindWorks Ventures and Crystal Stream Capital continued their tryst. With this round, the startup aimed to expand to 60 more cities across China and Southeast Asia.

Only nine months later, in October 2017, Lalamove raised its Series C round of $100 million from Xianghe Capital, Shunwei Capital, and MindWorks Ventures, and reported to have fallen a little short of achieving unicorn status. This round was intended for its entry to Indonesia and Malaysia, and extending its expansion to Vietnam.

With Series C funding, the startup expanded to a total of 100 cities in Southeast Asia, a target it achieved much ahead of time. According to news reports, from the time, Lalamove’s expansion in China had captured almost 80 percent of the country’s market.

With growth across major hubs of Asia, numerous venture capital firms like Shunwei Capital, Sequoia Capital China, PV Seed Fund LP, MindWorks Ventures, Hillhouse Capital Group, and Eastern Bell Capital came together to invest as much as $300 million for Lalamove’s Series D round in February 2019, allowing it to cross a valuation of well over $1 billion, and subsequently become a unicorn.

The logistics market in India

The logistics sector in India is expected to touch $215 billion by the end of 2020. Employing more than 22 million people in India at the moment, the sector is expected to be the largest job creator in the country by 2022.

India has many unicorns in the logistics space. Gurugram-based Delhivery became a unicorn in March this year after raising $395 million in a SoftBank-led Series F round, and Rivigo and BlackBuck soon followed suit. The other Indian players in last-mile delivery include Portflip, Blowhorn, HipShip, and Porter.

Last-mile delivery has always been the most challenging and expensive part of a delivery process. Today, B2B logistics startups are using technology to address the entire spectrum of logistics and supply chain needs – from demand forecasting and warehousing to freight transportation and last-mile delivery.

Speaking of the company’s plans for India, John says,

"We are hopeful that Lalamove can help the logistics sector grow by double in the future once we embed transparent pricing and cloud-based GPS tracking among other tech".

He adds that Lalamove innovates in its instant order-matching, transparent pricing, and GPS vehicle tracking. The app also allows the option of loading and unloading with multiple drop-offs.

With the digital medium being mainstream now, many industries are ditching the brick-and-mortar approach and going fully online. This has led the ecommerce market to offer ease in shopping, with reliable, fast, and timely deliveries. Logistics is no longer a business process; it's an integral part of any value chain.

However, Lalamove aims to only resolve the inefficiencies in the Indian market through technology. John says Lalamove’s real competition is not the other tech players in India, but the existing offline market.

He adds that Lalamove found the driver fraternity in India to be underutilised and not doing much business. And after doing its research on the Indian market, the startup claims to have found its product-market fit.