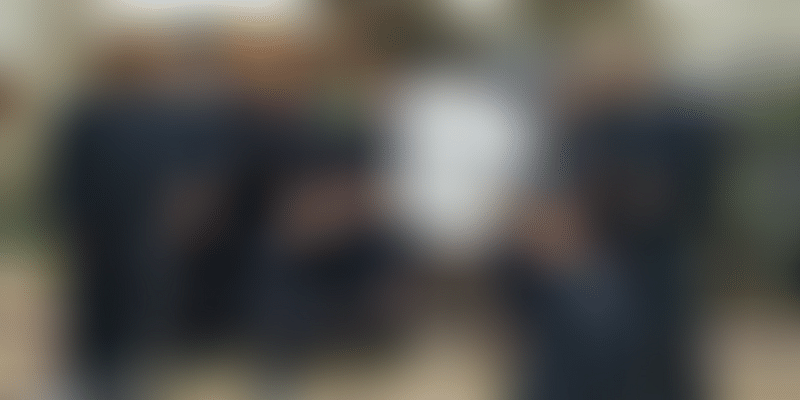 Raja Sekhar Reddy and Shishir Gorle launched Squaremeal Foods to provide employment to speech- and hearing-impaired individuals. They now run three restaurants, aim to launch 20 more by 2022, and also run a non-profit that trains and places SHIs at Amazon, Delhivery, and other companies.

Before venturing into the restaurant business, Raja Sekhar Reddy and Shishir Gorle used to work in the telecommunications sector, with Mumbai-based company GTL Limited. This was around the year 1993, a time when there weren’t many poster boys in Indian entrepreneurship to look up to.

But that was hardly a deterrent to the entrepreneurial course their career was about to take. In April 2004, the duo together founded Innovsource, a leading staffing company in the Indian market, and went on to head it for 14 years until it was acquired by Firstmeridian.

The two also launched the BizSR incubator, which basically grooms and mentors young entrepreneurs. While their entrepreneurial journey was well on track, it wasn’t until 2014 that they forayed out of the ordinary to contribute meaningfully towards the society, especially towards the speech and hearing impaired community.

Their latest venture, Squaremeal Foods, started with a vision to provide employment to 500 speech- and hearing-impaired individuals, is now a profit-making business with three restaurants under its umbrella - Mirchi & Mime, Madeira & Mime, and another outlet of Mirchi & Mime.

A sustainable livelihood for SHIs

“What makes Squaremeal Foods stand out is that not only is it adapting to the behavioural shift, but also trying to change the mindset of people by creating a sustainable and respectable livelihood for speech- and hearing-impaired staff, as servers at the restaurants,” says Raja Sekhar, the Founder of Squaremeal Foods.

A close look at the 2011 Census of India reveals that of the 13.4 million people with disabilities in the country in the employable age group of 15-59 years, 9.9 million(73.9 percent) were non-workers or marginal workers. Meaning, only 26.1 percent of the productive age group of the country is employed.

While Squaremeal joins organisations like Flipkart and Amazon in taking a socially-inclusive approach to addressing this gap, the numbers are too grim to overlook. The reality hasn’t escaped Founders Raja Sekhar and Shishir. In check with the state of employability for persons with disabilities (PwD) in India, the duo took a conscious step to reverse hiring practices.

“At Squaremeal Foods, the ratios are reversed,” says Raja Sekhar, adding, “Almost 50 percent of our workforce is made up of the specially-abled: people with the superpower of sign language.”

Asides from initiating inclusivity, the entrepreneurs are also ensuring means through which the speech- and hearing-abled can be inducted and included in the world of SHI. To achieve this, the Learning and Development (L&D) team focuses on two fundamental aspects: awareness and sensitisation workshops, and Indian Sign Language training.

“As a mandate, all speaking employees at our establishments are trained in ISL, to ensure ease of access in communicating with SHI, strengthen the bond, minimise awkwardness in interactions, and accelerate their performance and productivity,” the Founder adds.

Signs of the time

Squaremeal drew its inspiration from a restaurant called Signs in Canada, which also hired SHIs in a QSR format. The idea set the ball rolling for the founders, who now aim to have 20 restaurants, across India and the globe.

“We realised that in order to make our vision of creating employment opportunities for SHI a reality, it has to become a business that is 100 percent exclusively operated by SHI,” says the founder.

At present, the current team strength spread across SquareMeal Foods’ three outlets as well as its corporate team is 192 people. Of this, at least 75 staff members are speech and hearing impaired. “We started with 25 SHI staff for one restaurant, and today, we have as many as 75 SHIs in our three restaurants,” Raja Sekhar says.

Not many would know but there are some extraordinary qualities that SHI staff can bring to the workforce, including focus and intuitiveness. Skills like this not only help them navigate through the day-to-day grind, but also contribute significantly to overall productivity. At Squaremeal Foods, the idea is to nurture this productivity, and for that the team has ensured that it promotes SHI staff to supervisory positions over the years.

“We also run an employee recognition programme, where the employee of the month gets awarded,” explains Raja Sekhar. “This helps us to curb attrition to 7 percent, and make the establishment a happy place to work at.”

The origin of the Ekalavya Foundation

In building a respectable and sustainable livelihood for PwDs, job creation and employment is just one half of the process. To truly ensure an inclusive environment and induction of the speech and hearing impaired into the mainstream workforce, it is imperative that they have a safe haven.

Ekalavya Foundation is this place of refuge for SHIs looking to break out of social and professional barriers. Set up by Shishir and Raja Sekhar in June 2019, the non-profit education and research foundation aims to provide vocational training to SHIs and encourage corporates to absorb trained SHI staff as part of their manpower.

“Various organisations have responded positively in partnering with us, and have agreed to hire SHIs,” says Raja Sekhar, adding, “Our foundation’s latest wins include PharmEasy, which hired about 15 people; Delhivery, which hired eight people, and Amazon, which took on 15 people. There are many more brands in the pipeline, like Cadbury and Nilkamal, to name a few.”

“Our first restaurant is four years old while the second one is three years old. Both have individually seen a turnover of Rs 70 lakh –75 lakh a month,” says the founding duo, adding, “On the other hand, our third restaurant that was recently opened in May is yet to break even. It has seen monthly revenue of Rs 10 lakh –15 lakh a month.

Squaremeal Foods might be shouldering a huge social responsibility, but as a business, it is vital for the team to sustain. Even after treating CSR as one of their core activities – instead of dedicating a portion of the budget for the same – the company is, in fact, poised to grow.

In the near future, the founders want to open four more outlets. For Mirchi and Mime, the plan is to open 20 restaurants in the next three years, across Tier I and II cities in India.

“We are looking for like-minded investors for as well as for creating employment opportunity for at least 500 SHIs across the country,” Raja Sekhar says.

“We are also looking forward to raising an investment worth $2 million. For this, we are planning to reach out to family offices or small banks. This investment will be made to fund our upcoming four outlets.”