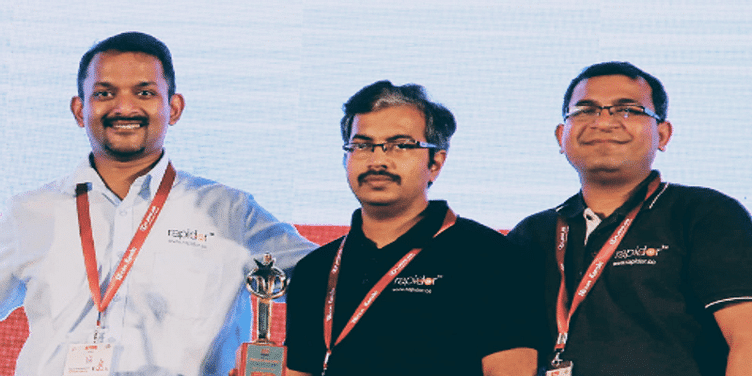 Kerala Startup Mission-backed Rapidor automates orders and payments for thousands of SMEs. Here’s why biggies like JioGenNext, Ingram Micro, and Microsoft for Startups are betting on it.

Last year, in an interaction with YourStory, Saji Gopinath, CEO of Kerala Startup Mission, counted ﻿Rapidor﻿ among the top three startups from the state.

And, for good reason.

Rapidor is not only among the leading players of Kerala’s startup ecosystem, but it is also representing India in the Comet Competition – the world’s largest B2B startup summit hosted by cloud leader Ingram Micro.

The Kochi-based startup, which runs a single-window platform for SMEs to manage their sales orders, inventory, invoice, and payment collections, was chosen out of 2,000 Indian startups following multiple rounds of competition.

At Comet 2020, Ingram Micro is slated to provide go-to-market (GTM) funding to 64 independent software vendors from across the world. The Rapidor team, which will be flying to the US in May, is understandably excited.

“We’ve received inbound requests from Spain, Belgium, Netherlands, and Malaysia. We also have two pilots running in Singapore, and some clients in the Middle East. If we get the GTM funding from Ingram Micro, it will help us grow our international presence.”

This increased attention for Rapidor’s B2B product didn’t happen in a day, of course.

Back in 2015, when Thomson co-founded the startup with his IIT Delhi batchmate Pawan Kumar (now the CTO), software solutions in the SME space were few and far between. Indian SMEs, in fact, viewed it as a luxury more than a business necessity.

“The general outlook then was that these are nice-to-have systems. But now, with money and payments becoming digital and with the complexities of GST, nobody wants in-person collections and paper invoices anymore,” Thomson shares.

Rapidor, which operates in a conventional software-as-a-service model, offered SMEs a platform that would help them automate processes, increase efficiencies, and improve transparency in the entire order-to-collection value chain.

Simultaneously, employees would end up spending significantly less time on the tabulation and invoicing of orders, which were now taken care of by the software.

“Our solution allowed every individual to save three to four hours per day. A sales order that would earlier take up to three days to process and invoice, could now be completed in half a day. We were able to digitise and capture the pulse of the merchant’s entire business on a single platform.”

Operations, customers, and growth via JioGenNext

Rapidor has more than 100 “direct clients” on its platform. These clients are, in turn, connected to other SMEs, taking the startup’s channel reach to 52,000. It processes monthly invoices worth Rs 42 crore, growing more than 8X in two years. In the next two quarters, Rapidor plans to increase its monthly volumes to Rs 500 crore.

“The market is huge in India alone, with the presence of 50 million SMEs,” the CEO says, adding, “We plan to reach one million of them by 2021.”

Its selection into JioGenNext’s 2019 fintech cohort has gone a long way in helping the startup scale up faster by integrating with more SMEs.

Rapidor’s credit-centric product, Rapidor Fin (R-Fin), allows its customers to monitor their dynamic credit scores based on their capital inflows, and helps them gain quicker access to loans from SME lenders, including top banks and NBFCs.

Simultaneously, the R-Fin platform also equips lenders with clear insights into the businesses and merchants being financed. The startup plans to make this an additional revenue stream (along with the SaaS fee it charges SMEs) going forward.

Besides gaining industry connections, the JioGenNext programme has also allowed Rapidor to identify other startups with which it can collaborate. “I’ve always been of the belief that you shouldn’t build everything yourself,” says Thomson.

He elaborates, “The better approach is to build solutions in a way other products and systems can integrate with it. We found six such startups within the JioGenNext cohort itself, and are already in conversations with some of them.”

With Reliance Jio’s increased support for India’s SME ecosystem, Rapidor further hopes that it can roll out its product bundled with other Jio services in future.

Rapidor hasn’t raised any venture or angel funding so far. But, the 15-member startup has earned a series of grants and cash rewards over the years.

In early 2019, it received a grant of Rs 12 lakh from the Kerala Startup Mission, a state-backed incubator for early-stage tech startups. Later in the year, it won $100,000 from Ingram Micro for emerging as regional winners of the Comet Competition.

Rapidor has earned credits from Google Cloud for Startups, and recently made it to Microsoft for Startups’  Highway to a Hundred Unicorns programme. It has also been recognised by FinLab, a Singapore-based accelerator.

With an imminent international expansion and a rapid scale-up, the co-founder reveals that Rapidor is in talks with investors to raise a Pre-Series A round of $2 million shortly. “This is in addition to the money we have put in as founders,” he says.

Any upcoming product innovations given the rapid evolution of India's SME ecosystem?

Thomson sums up Rapidor’s vision by saying, “Eventually, we want to be able to use AI and analytics and rewire existing employees into task-based operators.”