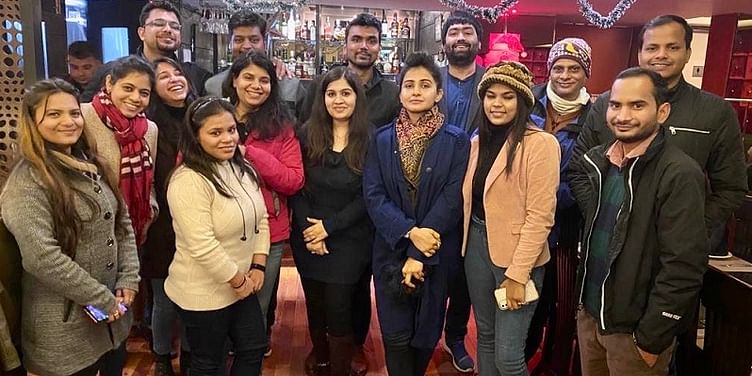 Delhi-based iDreamCareer helps students get into premium colleges like IIM-Indore, SRCC, IITs, NID, BITS-Pilani, etc. The startup works with students in the age group of 13-21 years.

At the age of 17, while doing his undergraduate course in computer science from PES University, Bengaluru, Ayush Bansal had to guide a student, who was a domestic help, in choosing the right career. Thanks to Ayush, he works at a multinational company today, earning about Rs 50,000 a month.

With a clear vision to promote the education sector in the country, Ayush started volunteering in various not-for-profit organisations that focused on providing education. He joined Evalueserve, an analytics and research company, after his post-graduation, where he developed a pilot version for ﻿iDreamCareer﻿in 2011.

In April 2012, Ayush decided to leave his job to start iDreamCareer as a not-for-profit initiative. The Delhi-based startup provides students with career planning, college admission information, counselling, and other related solutions.

In 2013, the startup was incorporated into a private limited company. Ever since its inception in 2013, iDreamCareer claims to have helped more than 2.5 million students annually, from Class VIII to XII and also in undergraduate colleges across India. Today, the startup works with over 6,700 schools across India and the Middle East.

Confused where to study? This startup lets you zero in on the best foreign university

While working at Evaluserve, Ayush came up with two ideas to help students with their career. One was on running a pan India and toll-free helpline for government school kids, and another was Skype-based career counselling for a school in a Naxalite area in Jharkhand.

“We looked at both urban and rural areas because, since Day 1, I was clear on creating a solution that is not dependent on economic background of a person, because I understand that career guidance is a problem that is common irrespective of whether it is in government, private, or international schools,” explains 31-year-old Ayush.

iDreamCareer works with students in the age group of 13-21 years. It is an integrated platform between students and career counsellors, wherein the solution comprises four components.

First is the career curriculum, where the platform claims to provide 1,000-plus hours of content on about 500 career options, over 1,800 career tracks, 19,500 colleges, and vocational institute directory, approximately 1,100 entrance exams, and approximately 950 scholarships in India and 14 other countries. This is to help students understand the various career opportunities available to them.

Secondly, it provides a psychometric assessment test, wherein it assesses the students on their aptitude, personality, and interest, and helps them to understand themselves.

The third solution is where the student has to go through a counselling session where they are guided to understand what is the right career choice for them.

The last solution is where the platform helps the students to apply for scholarships in colleges, and guide them in getting education loans, etc.

“Students whom we have counselled have got into premium colleges like IIM-Indore, SRCC, IITs, NID, BITS-Pilani, TISS, Symbiosis, Christ University, Caltech, UC Berkeley, and many others,” says Ayush.

Today, iDreamCareer has about 30 full-time employees across its offices in Delhi, Mumbai, and Bengaluru.

The startup provides both on-ground counselling to students in schools it has tied up with and also provides online counselling through its app.

iDreamCareer charges the private school students on a per-student-per-year basis for a four-year retention from Class IX to XII. When it comes to government schools, either the government or the companies providing CSR activity will pay iDreamCareer for its services. For B2C (online counselling), the startup charges Rs 6,000 to Rs 15,000 depending on the package.

[Startup Bharat] College dropout sets up an edtech platform to connect students to schools, colleges, and universities in rural areas

Post the angel round in 2015, the startup started focusing on building the B2C model, but ended up burning the entire money in scaling it up. According to the founder, the market then was too early for career guidance at a B2C level.

“By March 2016, we were left with zero cash in our bank accounts. I was able to stretch the run from April 2016 to February 2017 via raising debts from my personal networks. Our angel investor and investor director Mohit Satyanand provided the much-needed support to pass this tough phase. However, by the end of February 2017, we took a call to close down the company and scaled down from 15 full-time members to just three,” recalls Ayush.

It was his first experience of facing such a tough phase. He thus started helping the team members to find jobs in other companies.

In March 2017, two of iDC’s long-pending discussions with the government and a corporate organisation finally materialised, and that helped the startup get back to life. Since then, there has been no looking back.

“What kept us going was the sheer grit and passion to solve this problem and make career guidance accessible to students from all strata of families. Learning from my mistakes in the past, we are very lean and operationally efficient. This has helped us to be sustainable in the education space,” says Ayush.

From 30,000 students in the beginning, the startup has now grown to impact 35 lakh students annually, and is scaling its revenue from just Rs 18 lakh to over Rs 10 crore in FY20.

iDreamCareer also started a 100-hour blended Certification in Career Counselling programme (CCC) in 2017, and grew the network from just 22 to 847 counsellors across 103 districts in India.

iDreamCareer then raised undisclosed funds from Brand Capital in 2016 and from US-based Impact VC Gray Matters Capital in March 2019.

Standing out in the market

According to a 2016 KPMG report, the Indian edtech market is pegged to touch $1.96 billion by 2021. Some of the other startups offering career counselling include iSchoolConnect, studyportals, MyMBACircle.com, and Gradschoolmatch.

However, Ayush says iDreamCareer’s USP is that there are no players offering all four services that it provides at one place.

“Secondly, our content is available in five regional languages - namely Hindi, Telugu, Gujarati, Assamese, and Odia. We are the only career guidance platform in the country offering multilingual counselling content,” explains Ayush.

He adds that the content provided on the platform is highly comprehensive, which includes not just the basic career curriculum, but also other data about the salaries, the kind of expenses that one might occur, etc.

In the next three years, the team plans to scale up aggressively by focusing on the B2C and private school expansion. The startup is also in talks with investors to raise another round of funding.

Ayush says a lot of work is going behind the automation of the platform and the app. It is also building new features such as a chatbot for career guidance and alumni mentoring feature on the app, where a student can find mentors from their own school working in different sectors, with whom they can chat.