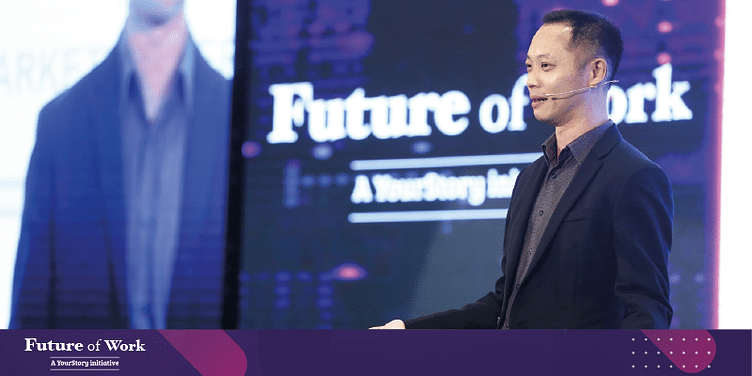 At Future of Work, YourStory's flagship product-tech-design conference, Alibaba Cloud’s Yaw Yeo spoke about how the cloud is empowering people amidst the coronavirus crisis.

The silence that hangs over China’s offices, schools, and assembly lines is deafening. As the death toll following the outbreak of the Coronavirus mounts across China and the world, there has been a significant fallout on the economy and daily life.

With many tech giants across the world cancelling their flagship events, China’s own ﻿Alibaba Group﻿ has served up a novel solution: its Cloud service.

Self-driving databases are the future, says Feifei Li of Alibaba

Speaking on Day 1 of ﻿YourStory Media﻿Future of Work, Yaw Yeo, General Manager of International Product and Business for several product groups (CDN, Edge Computing, Video, cPaaS) under Alibaba Cloud spoke about how the coronavirus is literally redefining the future of how we work.

“The coronavirus is something that has been weighing on all our minds. We have been applying a lot of our technologies to help minimise the impact of the situation on work and people. In various cities across China, tens of millions of people have to stay at their homes. This has had a tremendous impact on business,” said Yaw.

Yaw added the virus has also resulted in a spike in working from home. “Bloomberg termed this the largest work from home experiment,” said Yaw.

This is the efficiency of the Cloud that Alibaba is bringing to its country. Alibaba’s DingTalk launched a “remote office” function for free for 10 million companies and organisations, which was supported by Alibaba Cloud, to assist organisations to resume businesses via the cloud.

This is a significant achievement for the Alibaba Group that only recently migrated its entire business to its own cloud – Alibaba Cloud.

The China-based company also announced that its cloud revenue had grown 62 percent to $1.5 billion in 2020. Merely a decade after it was founded in 2009, Alibaba Cloud is the #1 cloud provider in Asia Pacific and #3 in the world.

“It’s been a 20-year-long journey for the Alibaba Group. While most people know us as an ecommerce company, we have diversified into fintech, mapping, local delivery, retail, logistics, movie production and more. We needed the infrastructure to power all our business units from mapping to collaboration to our very successful Singles Day sale,” said Yaw.

Alibaba Cloud’s journey began when data from different business units was stored separately. “We basically brought all that together and made the Alibaba Cloud. The migration of Alibaba’s core ecommerce system to the public cloud was a defining moment for the company as it not only brought about greater efficiencies but was also a way to build greater confidence in customers to migrate their operations to the Alibaba Cloud.

“Every technology Alibaba Group sells has been beta-tested internally, and the cloud was no different,” said Yaw.

Today, Alibaba Cloud has deployed infrastructure globally, with over one million paying customers, 2,800+ Content Delivery Network (CDN) nodes worldwide across 200+ countries and regions, 63 availability zones and 21 global regions. “This means that we are operating at the scale at par or better than other players,” said Yaw.

“The decision to move to the cloud was not an easy one. In 2009, there was a huge split on whether to venture into the cloud. Some of the engineers said we should move everything to the cloud while the others doubted if we can make it happen. Ultimately, we decided to move into the cloud,” he said.

Explaining why the Group ventured into the cloud, he said Alibaba could not find any providers who could support them at the scale they needed.

“On Singles Day, which is the world’s largest shopping festival, Alibaba Cloud supported $38.4 billion GMV in just 24 hours with peak order over 544,000 per second. That’s more sales than Black Friday and Cyber Monday combined, and with zero downtime.”

“If you think about it, a decade or so ago, this would not have been possible. Just imagine the extent of what we have achieved. It’s mind-boggling what technology has made possible,” said Yaw.