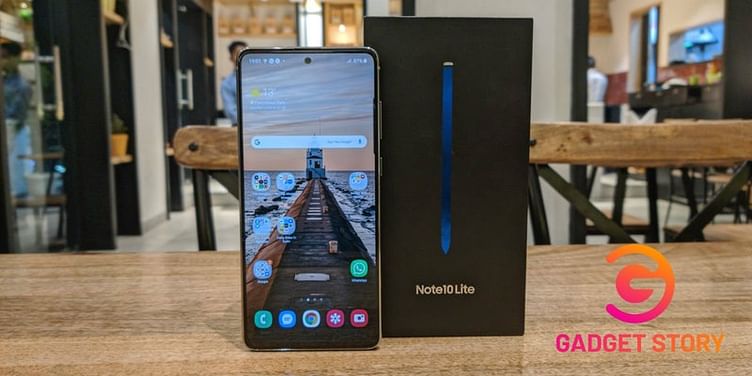 The Galaxy Note 10 Lite is Samsung’s cheapest ever smartphone featuring a stylus. Here is our in-depth review of the phone.

For many years, the stylus was reserved for the flagship ‘Note’ series alone. Once a year, around August, Samsung would introduce its Note-series smartphones with the ever-popular S-Pen.

After enticing potential customers and dangling the S-Pen in front of them for years now, Samsung has finally launched a ‘cheaper’ Note series device and has brought the stylus to the masses.

The Galaxy Note 10 Lite is Samsung’s cheapest ever smartphone featuring a stylus.

Late last month, Samsung brought ‘Lite’ versions of both its flagship - Galaxy S10 and Galaxy Note 10 - smartphones. The major difference, apart from the chipset and camera setup, is the fact that the Galaxy Note 10 Lite features the stylus we’ve all come to love: the S-Pen.

Is the stylus enough to entice the potential customer to Samsung’s latest offering? Before we delve into whether the device is good or not on its own, let’s talk about the use cases for the S-Pen and how it’s gathered such a loyal fan base over the past couple of years.

One may think that the S-Pen is mostly built for artists, but they’d be wrong, because it has a whole lot of different use cases:

- Screen-off notes: One of the most loved features of the S-Pen is taking notes. With the display off, one just needs to pull out the S-Pen. Thereafter, one can write or scribble across the screen. Thanks to it being an AMOLED display, the screen is completely black and one can see what their writing clearly.

- Scribbling/doodling: Another thing the S-Pen can do is to allow you to scribble/doodle whenever and wherever you’d like: drawing, caricatures, or random lines of a song you just remembered.

- Taking photos: One of the features I’ve come to use the most with the S-Pen is taking photos. One just needs to open the camera app and use the button on the S-Pen to click a photo and change the camera that they prefer to use.

Furthermore, if there is any text in the image, you can simply hit ‘extract text’ and the text will be copied.

- PENUP: With PENUP, one can just open the app and find a number of drawings in which they can use the S-Pen to colour in.

- Translation: One just needs to hover over a word on the screen. Using Google Translate, the source word will then be translated into a language of your preference.

- Handwriting converted to text: Once you’re done taking notes with the S-Pen, the Note 10 Lite can then convert your handwriting into text, which can be easily copied and used anywhere.

Is the Galaxy Note 10 Lite good without the S-Pen? The short answer is yes.

Just like its sibling, the Galaxy S10 Lite, Samsung has cut corners to reach a more affordable price point.

That’s where one would start to wonder. But besides an outdated processor (Exynos 9810), the Note 10 Lite has a lot going for it. Especially that non-curved OLED display.

Let’s take a detailed look at all its features:

The review unit came with the same ‘Aura Glow’ that was all the rage back in August. The back of this smartphone is stunning.

The plastic on the Note 10 Lite versus the Note 10’s glass may make the former seem like a cheap sibling, but let me tell you otherwise. The Note 10 Lite felt great to use on a day-to-day basis and didn’t give off the ‘watered-down flagship’ vibe even though it is.

The typical Samsung display consists of three things: vivid/punchy colours, deep blacks (thanks to AMOLED), and great viewing angles. The 6.9-inch display on the Note 10 Lite is no different. Samsung used the same winning combination here and it shows. Binge-watching movies and TV shows is a delight.

Samsung has given the Note 10 Lite the out-of-the-box One UI 2.0 software experience. It makes one, at times, forget that the Note 10 Lite has an outdated chip. The software is fluid and lag-free and just so much fun to use. Gone are the days of the horrible TouchWiz software one had to deal with.

And, as mentioned before, the main USP of the Note 10 Lite is the S-Pen, and the company delivers on that front.

That’s because in the day time, the Note 10 Lite shoots pretty good photographs. Even the portrait shots are quite good.

The edge detection was on par course for mid-range smartphone cameras so no complaints there.

The only thing I’d dock from the camera setup is the low-light photography. Shots weren’t as sharp as some of the competition’s cameras.

I’m not a fan of the ultra-wide camera in any smartphone but the Note 10 Lite did a pretty okay job there.

While the Note 10 Lite sports a 4,500mAh battery, same as S10 Lite, the battery life was less than what the latter offered. I managed to last an entire day, without any issues, but stretching it into the morning seemed a hassle. The S10 Lite easily lasted until the afternoon of the next day with medium-to-heavy usage.

The smartphone does come with 25W fast charging. This means that one can top up the smartphone from zero to 50 percent in just over 30 minutes. Pretty handy in case you’re out and about and need just a little bit extra juice.

Slightly larger bezels: The Note 10 Lite has seen the return of the bezels. It’s not large enough to be an eye-sore but it’s definitely noticeable, as compared to its elder brother, the Galaxy Note 10.

Outdated chipset: The Note 10 Lite comes with an Exynos 9810 chipset that debuted with the Galaxy S9 a few years ago. While it is a capable chip on its own, you do notice performance dips under heavy pressure. Even during day-to-day tasks, the smartphone can take a couple of more seconds than you’re used to on average to perform some tasks.

Still, the Note 10 Lite breezes through most tasks and can handle gaming without slowing the phone down at all.

Phone heats up: The Note 10 Lite does heat up a considerable amount when charging or when streaming for over half an hour or even when gaming. It doesn’t get hot enough that you have to put it down but it is quite noticeable.

Lack of any waterproofing and dust resistance: One of the corners that Samsung had to cut to bring the price down is omit any sort of water or dust resistance. For a phone that retails around the Rs 40,000 mark, this is very much a bummer.

Erratic in-display fingerprint scanner: Almost as immediately as I registered my fingerprint I had removed it. Every time I tried to unlock the smartphone with my fingerprint, it wouldn’t work. It took me a few tries each time and that was frustrating.

So, the Samsung Galaxy Note 10 Lite worth it? The answer is yes if you have a need for the S-Pen, else then there is no reason to get this smartphone instead of the Galaxy S10 Lite. That smartphone is snappier, has slightly better ergonomics, and better battery life.

What’s missing with the Note 10 Lite is that beyond the S-Pen, there is not much to get excited about.

With it being so similarly priced to the Galaxy S10 Lite, and not having anything besides the S-Pen, it just won’t extend beyond its core market.