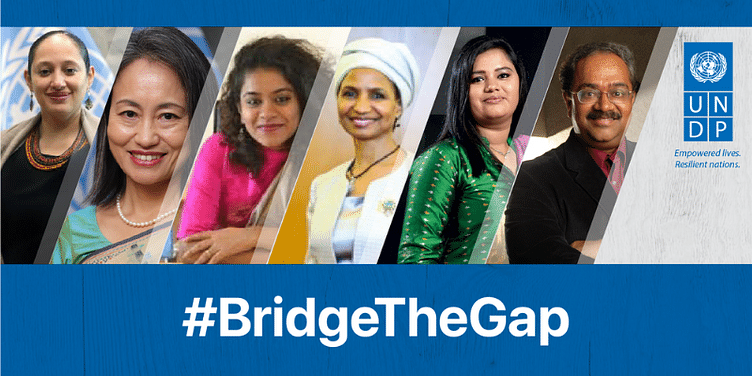 At UNDP’s International Women’s Day celebrations, female leaders spoke about how workspaces can be made more gender-neutral and explained how gender-stereotypes are broken.

A report by the Gender Social Norms Index released by the United Nations Development Programme (UNDP) recently revealed that as much as 90 percent of people are biased against women.

It also revealed that about 91 percent of men and 86 percent of women hold at least one bias against women concerning politics, economics, education, violence, or reproductive rights.

Despite all the efforts put by various governments, corporates, and others for gender equity, a lot still needs to be done to skill and empower women for the Fourth Industrial Revolution.

“With declining female workforce participation, how do we prepare young women for the future of work? And more so, how do we make sure that the future is inclusive?” Shoko Noda, Resident Representative, UNDP India, asked at UNDP’s International Women Day celebrations in New Delhi on Wednesday.

She said we should start by embracing and celebrating the diversity among young women and girls and see how their ideas and solutions will be central for solving some of today’s emerging developmental challenges.

“Gender equality is a fundamental human right. We need to make the world a more balanced place, where power is shared equally between women and men,” she added.

Speaking on the side-lines of the event conducted by the UNDP to discuss the future of work and how the representation of female workforce is consistently declining, Shoko said, to leverage on the unrecognised potential of young women in driving innovation, we must understand some of the gender-specific challenges women and girls today are facing, and simultaneously, acknowledge the innovations done by them.

She also highlighted the fact that no sector is gender-neutral and as per recent researches, even innovations within artificial intelligence (AI) are based on gender stereotyping.

“We shall encourage closing the gap between girls and boys in STEM and equip young girls and women for an inclusive market. We should continue exploring the connections between the 21st-century skills, including digital literacy, life-skills, and school to work transition, as well as stressing the importance of creating market linkages for women through women’s collectives, self-help groups, and by working with family support,” she added.

She also spoke about the UNDP Accelerator Labs, where innovators and entrepreneurs can build momentum, find locally sourced solutions, test what works, and combine the best understandings, ideas, and expertise, generating new knowledge for reducing inequalities.

Having been influenced by women all his life, R Ramanan, Mission Director, Atal Innovation Mission - Niti Aayog, at the event said that women and girls are an untapped resource when it comes to innovation, and therefore, they should pursue more deep tech opportunities.

He added, to date, women face challenges such as stereotypical social values, access to education, capital, and finance.

“Technology is changing the landscape of the world. You can leverage technology to create livelihood, access financial capital across the country, and access education. Hence, we need to create more facilities for women so that they can innovate,” Ramanan said.

Moreover, he said that AI will create new jobs and that the nature of jobs will change moving forward, contrary to the belief that it will kill jobs.

Speaking on breaking the gender stereotypes that still exist in India, Nishtha Satyam, Deputy Country Representative, UN Women, said that it is necessary to empower men equally as gender stereotypes affect both men and women, highlighting that social barriers are not just a rural issue as they cut across all sections of society.

“Gender stereotyping is not a women’s issue, it’s everyone’s issue. Men want to be part of the change and we should extend the hand of a partner. Breaking gender stereotypes will benefit society as a whole,” she added.

Wrapping up the talk, the leaders believed that as a society, we have come a long way and we have yet a long way to go to make the change and the world a gender-neutral place.

As Argentina Matavel, the Resident Representative for UNFPA rightly put it, “Unless that last woman and girl have an equal opportunity to that last man and boy, till then, we have a lot to do.”