An Army colonel, a fashion designer, and a CA want to keep you ‘safe’ with their startup 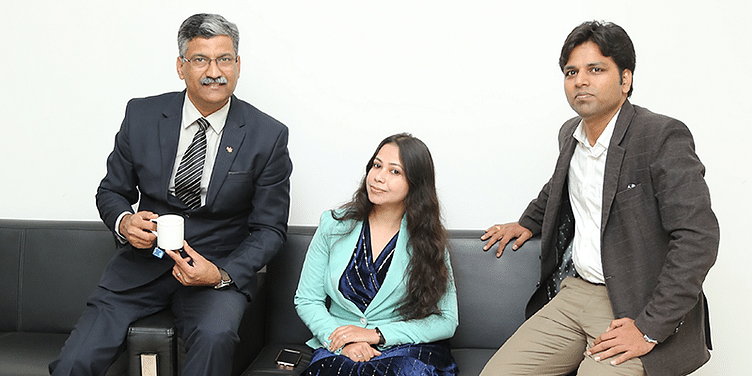 After serving in the Indian Army for 23 years, Colonel Krishan Kumar Singh decided to hang up the uniform in 2017. The same year, he joined IIM Ahmedabad to pursue an executive MBA. After gaining exposure in “various fields of management” at the prestigious IIM-A, Col. Singh started consulting with corporates and became a mentor for startups. His stint in the Indian Army ensured that he was up to speed with the latest technological advancements across the world.

“I was in the Tank Regiment and tanks have a lot of tech in them. There are 7,000 components in a tank, and that’s a huge amount of tech. In my stint, I had touched the high-end of tech in every aspect and also got to interact with every top-level tech executive across the world,” he says.

Purvi’s long-time friend, Atul Gupta, a chartered accountant, lost his wallet while travelling in the Delhi Metro in 2016.

“I lost all my IDs along with the cash I was carrying. Losing cash is not as bad, but I had to really struggle to get all my original IDs reissued. It took me over six months,” says Atul, who went on to co-found AristaVault with Purvi and Col. Singh.

After looking at the statistics, the trio realised Atul was one of several similar victims and a major problem was waiting to be solved as far as wallet and mobile phone thefts were concerned. This led them to start AristaVault in 2018. The Delhi-based startup was set up with the premise of making wallets and mobile phones secure from theft and loss.

According to data from Delhi Police, on an average, every day, 35 passengers fell victim to thieves and pickpockets in 2017, with wallets, mobile phones, and small bags topping the list of stolen items. In Mumbai, on an average, 66 mobile phones were stolen every day on its local train network, as per data released by the Government Railway Police.

AristaVault, which means unhurt in Sanskrit, was initially set up by Purvi (28) and Atul (35), with Col. Singh (47) as a mentor. The Indian Army veteran came on board full-time as a co-founder last year.

The startup retails four versions of its smart-wallet, which comes with a two-year replacement warranty through Amazon and its own website. The wallets, which are made from leather, range between Rs 1,800 and Rs 8,000, depending on the version you pick. The various features offered include anti-theft, anti-loss, phone tracking, anti-RFID (Radio Frequency Identification), wireless, and wired phone charging. There are options for both men and women within the selection offered.

An Arista wallet on an average weighs around 115 grams, more than a regular wallet, which typically weighs 70-75 grams.

“It (the wallet) has sensors, so whenever it is 20 metres apart from the connected smartphone, both the wallet and the phone will start making a noise. And in case you miss the beep, you can locate the phone through the in-built GPS tracker,” says Col. Singh. The anti-RFID technology in the wallet also ensures that your credit and debit cards can’t be cloned, he added.

In the last decade (from April 2009 to September 2019), Rs 615.39 crore was lost in over 1.17 lakh cases of credit and debit card frauds, according to data from India’s central bank, the Reserve Bank of India (RBI). The actual amount lost to such cases of fraud is likely to be even higher, since the RBI did not record cybercrimes amounting to less than Rs 1 lakh between April 2009 and April 2017.

AristaVault launched its first set of offerings last year and has filed patents for its technology. It is also looking to launch tech-enabled backpacks, smart cases, and file cases.

The startup, which is supported by the Ministry of Electronics and Information Technology (meitY), claims it does not have competition in India, but considers San Francisco-based startup Volterman, which offers similar features in its wallets, a rival.

Interestingly, Volterman happens to have a similar origin story as well. Volterman Founder, Azat Tovmasyan, reportedly started thinking about developing an easy way to find his wallet, because he used to keep losing it and was especially pained by the process of having his documents and IDs reissued.

The smart-wallet market across the world seems to be gathering momentum. According to US-based market research firm Credence Research, the smart-wallet market is set to touch $526.8 million by 2025, with a compounded annual growth rate (CAGR) of 12.1 percent during the forecast period from 2017 to 2025. The market was valued at $194.7 million in 2016.

An eye on the global market

Having started with the Indian market, AristaVault has recently started selling in the US and UAE markets as well. Purvi says, the company has been getting enquiries from across the world, and would like to expand its global footprint over a period of time.

AristaVault is also open to partnering with other companies through tech licensing. “One thing we are very clear about, is that, while we are open to partnerships, we won’t give away our tech,” says Atul.

To ensure the tech cannot be duplicated through deconstruction of the wallets, the startup has put safeguards in place.

“We have black box like technology so that our tech cannot be duplicated. It will self-destruct if copycats try to open it to understand the internal workings,” says Col. Singh.

The startup was also approached by international fashion house Gucci for a possible collaboration some time ago, says Purvi. However, back then, the startup was not ready with tech licensing, she adds.

The startup is currently bootstrapped with Rs 30 lakh from personal savings of the three co-founders, and has not raised any funding yet. But in a month or so, once its patents come through , the company will start looking at raising around Rs 1 crore to fund its expansion plans.

Till date, the company, which has a 10-member team, has sold over 1,000 units, clocking Rs 35 lakh in revenues, with a margin of 30-40 percent, according to Atul. The Delhi-startup claims to have been profitable from its very first year.