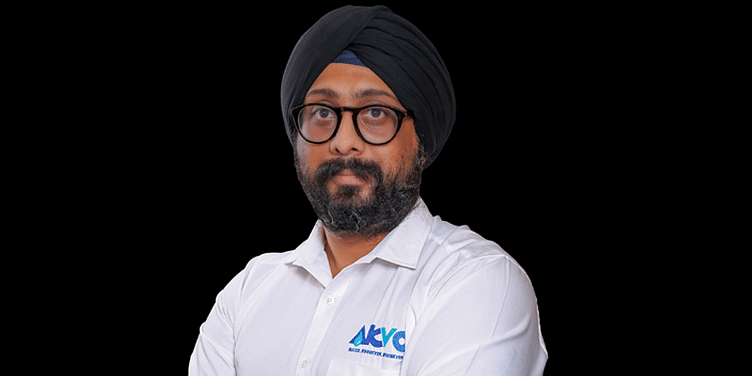 Kolkata-based cleantech company AKVO designs and manufactures a range of atmospheric water generators (AWG) that require no water source to produce purified drinking water from the atmosphere. Water made using AWG technology from AKVO costs only Rs 1.75 to Rs 2 per litre.

Water scarcity reports have become the norm across the globe. And our country has not managed to avert the crisis. According to a 2018 WaterAid report, over 12 percent of India’s population is already living the 'Day Zero' scenario, thanks to excessive groundwater pumping, an inefficient and wasteful water management system, and years of deficient rains.

Innovation is the need of the hour and a Kolkata-based company is doing just that by producing pure drinking water out of air.

Sounds like magic? Well, it is science, says ﻿AKVO﻿ Atmospheric Water Systems, which claims to be the first player in India to manufacture atmospheric water generators indigenously.

Atmospheric water generators (AWG) are machines that can produce water from air. They work on electricity and use the simple process of condensation and filtration to produce fresh and clean water, without requiring any external source of water.

Using the AWG technology, the Kolkata-based company replicates the natural process of condensation by simulating a dew point, which allows it to make water continuously, even in low humidity conditions.

The brainchild of Kolkata based second-generation entrepreneur, Navkaran Singh Bagga, who started this venture in 2017, AKVO works on a simple plug and play method and consumes one unit of electricity to run for an hour.

“The water resources in the world are fast depleting, and it is time to make the world water positive and renew our groundwater sources. One of the solutions to this is AWG. By generating your own water, you reduce the consumption of groundwater and help in renewing and replenishing our groundwater resources. These factors made me reflect and lead my team in manufacturing AKVO, which is future-ready.”

Navkaaran points out that while marketable water is available from Rs 15 to Rs 20 per litre and always has the cleanliness suspicion tag attached with it, water made using the AWG technology from AKVO costs only Rs 1.75 to Rs 2 per litre.

“AKVO gives you complete water independence without having to be bound to pipelines and water sources. Ours is India’s most cost effective machine that uses the least amount of power to generate the most amount of water, with zero environmental impact,” the Founder adds.

AKVO’s machine depends on the humidity and temperature in the geographical location it is installed in. It is designed to run at temperatures ranging from 10-degree Celsius to 60-degree Celsius with humidity factor of 30-80 percent, making it a viable model to deploy in coastal and hilly areas, especially in tropical countries that are rich in atmospheric moisture content.

“We will be launching a household model in 2020 and it will be a certain game changer. We are also working on a table-top model that can replace bottled water at hotel rooms, reducing the plastic usage and also saving the environment,” says Navkaran.

“Our current machines can also be used for domestic purpose but since the capacity range starts from 100 litres per day, we are coming up with a more compact model which can produce 25 litres per day and would suit an average household,” Navkaran adds.

AKVO is using heat exchange and refrigeration technology to generate water from air.

AKVO consists of a team of 25 members, nine of which work in production, research, and prototyping.

AKVO’s global sales and marketing head Pradeep Verma is a veteran of the water industry having worked with Eureka Forbes and then Marmon Holdings, Inc, which is a Berkshire Hathaway company. Verma has over two decades of experience in sales and business development having exposure to Indian and other South Asian markets across industries.

Founder Navkaran has an undergraduate degree in Finance from the University of Kent at Canterbury, UK and also holds an MBA Degree from The SP Jain Institute of Management Research.

He is also the Director at Trishan Metals Pvt Ltd which is a joint venture with IFB Industries Ltd for manufacturing specialised Automotive Grade Steel. Navkaran has also been the Chairman of ALFA Network, the Youth Forum of Assocham, which has a clear focus on promoting entrepreneurship in India. He was also the Vice-Chairman of the CII-Yi Kolkata Chapter for the year 2016.

Navkaran says that AKVO’s target audience will comprise anyone who needs fresh pure drinking water or areas that are facing water crisis due to depleting natural resources or people looking for an environmentally safe and renewable source.

AKVO has been successful in making its presence felt across the globe and in India. “We have a significant number of customers from all industries and I’m proud to say that at least 5,000 people consume water from our machines daily,” says Navkaran.

A dusty hamlet in Damoh region of Madhya Pradesh, with a population of around 1,500, faced acute water scarcity with no proper water system. The Public Health and Environment Department of Madhya Pradesh approached AKVO to come up with a solution. Now, after 10 months after the installation of the AKVO 365K machine unit in Hardua, villagers receive about 1,000 litres of fresh drinking water every day from air.

Over 50 machines have been installed in Chennai—which faced a severe water crisis last year—across schools, residential complexes, private institutions, etc. The company is also in talks with other big MNCs in Chennai to install the machine at its offices.

Over 44 AKVO machines have been installed at the Qatar FIFA World Cup 2022 stadium, with an order for over 350 more.

To strengthen their proposition in the Middle East, AKVO has also installed its new 300 litre machine at SEWA (Sharjah Electricity and Water Authority). DP World, a logistics company in Dubai, has installed its first machine in its Dubai port.

Six machines have been installed in Lakshadweep island as well in association with the local government.

The present outlook and future

The  Composite Water Management Index (CWMI) report released by the Niti Aayog in 2018 states that by 2030, the country's water demand is projected to be twice the available supply, implying severe water scarcity for hundreds of millions of people and an eventual six percent loss in the country's GDP.

“For a product like AKVO, the future is like a treasure box as there are multiple channels through which this product can serve humanity as a whole. The water produced from AKVO AWGs agree very well with the standards set by Bureau of Indian Standards (BIS). The tests were also agreeable with the standards set by ISO 10500, 2012, and has been marked safe for drinking,” Navkaran explains.

AKVO has grown 3X in the last three years and is looking at continuing the growth momentum for FY20-21 as well.

Presently, AKVO has sold over 200 machines worldwide. It is bootstrapped so far but is planning on raising funds soon as the firm is currently in talks with a few investors.

While speaking about the revenue, Navkaran adds, “Currently, we’re at a top line of a little over Rs 2 crore and with an expanding distribution network and new markets in the Gulf, we expects to hit our target of Rs 12 crore in the coming financial year.”

There are a few other players in the industry like Watermaker, but Navkaran claims that AKVO is the largest AWG manufacturer in India. “We’re the lowest in power consumption per litre of water generation globally,” he adds.

According to the CWMI report, 21 major cities (Delhi, Bengaluru, Chennai, Hyderabad, and others) are in the danger of reaching zero groundwater levels by 2020, affecting access for 100 million people. The country clearly needs immediate and long-term solution like AKVO’s AWG to effectively address the water scarcity issue.