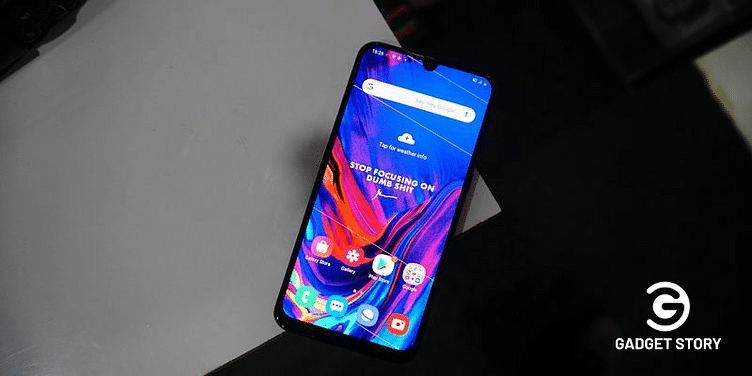 The Samsung Galaxy M31 enters a crowded mid-range smartphone segment, where POCO, Redmi, Realme, and others are jostling for space. Is it worth the upgrade from its predecessor M30S?

The Galaxy M31 ships with One UI 2.0 (based on Android 10) out-of-the-box. Apart from the upgrades to the battery, camera, and software, there isn’t much else separating it from the Galaxy M30s.

Other phones in the range include the POCO X2, Redmi Note 8 Pro, Realme XT, among others. As Samsung has decided not to discontinue the Galaxy M30s, let’s find out if the Galaxy M31 can win this already-crowded market.

A sharp display and a sharper UI

Samsung, known for making stellar displays, doesn’t disappoint with the Galaxy M31. With a 6.4-inch FullHD+ AMOLED display, the phone is a notch above its competitors.

The colours are vibrant and punchy and the text is sharp (props to Samsung’s One UI 2.0 here) and the sunlight legibility is also quite good. Additionally, the Samsung Galaxy M31 has a Gorilla Glass 3 for protection.

Needless to say, streaming on apps like YouTube, Netflix, and Amazon Prime Video is a treat, especially because it has the Widevine L1 certification for high-definition videos.

The smartphone has an Infinity-U notch on top of the display, which houses the 32-megapixel selfie camera. The bezels are kept to a minimum. However, the bottom chin is a bit thicker for a smartphone in this price range.

The Galaxy M31 has a glass build on the front and polycarbonate elsewhere. As a result, the rear panel can attract fingerprints, ruining the aesthetics of an otherwise well-designed smartphone.

As discussed in our previous Samsung reviews, the One UI 2.0 has proven to be quite an improvement over its older TouchWiz. A smooth Android skin, it works well on most Samsung smartphones and has a few nifty features – Always-On Display, Ultra Data Saving, and Dual Messenger – that add to the package.

However, one cannot expect to escape bloatware. Despite that, the One UI 2.0 provides a more fluid software experience consumers will be delighted with.

The USPs of Galaxy M31

The Samsung Galaxy M31 has two big wins. First, it comes with a massive 6,000 mAh battery. Just like the Galaxy M30s, the device can last two days on a single charge with over six hours of screen-on-time (SoT).

Our usage included gaming, watching videos, scrolling through Twitter, browsing multiple tabs, and some photography. If you play videos at 50 percent brightness and at full volume, you get about 19 hours of playback – an impressive feat.

The second and more important win is the smartphone’s quad-camera setup.

Portrait shots come out quite well too and have a good edge detection. The ultra-wide sensor is a fine addition and most avid Instagram users would be quite pleased.

The only downside is taking low-light photography. Samsung’s software processing leaves a lot to be desired, and you may not want to use the Galaxy M31 in low-light conditions.

The two departments where the Galaxy M31 could have been better are design and the placement of the fingerprint sensor.

Having the fingerprint sensor on the rear dampens the aesthetics of the device. It is not very well-designed and misses your fingerprint often. It is also placed a bit too high for comfort. Of course, the sensor is better placed than the one on the Galaxy M30s, but still needs some work.

While the build quality is good and the phone feels sturdy, having a plastic rear has its downsides.

First, the back of the phone becomes a massive fingerprint magnet. Smudges are way more visible on the black model (which we reviewed). Even if you clean it, they come back to haunt you in seconds.

Second, the plastic is very soft and is prone to scratches easily. Also, the rear surface is a bit uneven. There isn’t a protective case in the box, which is a bit of a let-down.

Lastly, the Samsung Galaxy M31 comes without any dust or water resistance features.

On the performance side, the smartphone houses the same Exynos 9611 processor as the Galaxy M30s did. It performs decently for regular usage but might not be your best bet when it comes to gaming and multitasking.

Samsung also did not give the Galaxy M31 fast charging, and the device takes over two hours to go from 0-100 percent battery.

Verdict: Should you buy the Galaxy M31?

Overall, not much has changed vis-a-vis the predecessor. Since the Galaxy M30s was released only a few months ago, the Galaxy M31 may not be worth an upgrade.

But Samsung has done a fine job of improving its M-series handsets in the last few months. With a beefy battery, an AMOLED display, and a trustworthy brand name, the Galaxy M31 can be a good option for those using older phones and looking to switch. Its affordable price point will also make it viable in smaller towns.

Some users might even consider the Galaxy M31 as a backup phone.

If you want a long-lasting smartphone with surprisingly good daylight photos and a great AMOLED display for watching videos, the Galaxy M31 is a great choice. But, if you are looking for more action at the same price point, the Poco X2 might be a better bet.