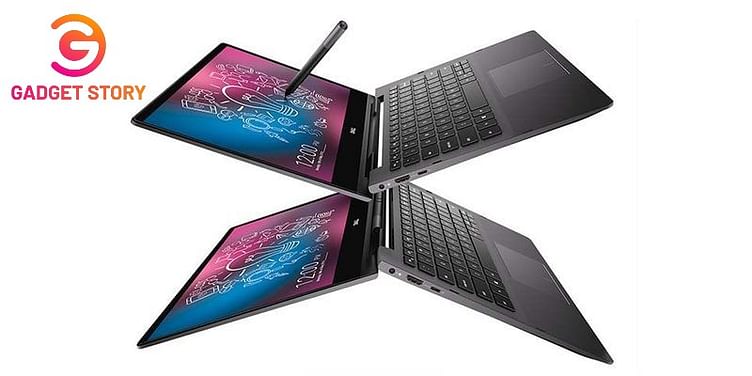 With a starting price of Rs 90,290, can the two-in-one Dell Inspiron 13 7391 rule the convertible laptop market in India?

It wasn’t all that back that when convertibles (aka two-in-ones) were on the verge of overthrowing clamshell notebooks. That may not be the case in 2020 but companies like Dell, HP, and Lenovo are keeping the flag flying high.

The Dell Inspiron 13 7391 launched in September of last year in India. It’s an update that one expects for 2020. It’s got Intel’s 10th generation core processors, a new ‘garage’ in the hinge that store the full-size ‘Active Pen’, and Adaptive Thermal technology that adjusts performance based on how the consumer is holding the laptop.

With all these changes, and a starting price of Rs 90,290, can the Dell Inspiron 13 7391 rule the convertible laptop market in India?

Here’s what I thought after using it for two weeks.

The design is classic Dell – great but uninspiring – and is made of aluminium. It’s compact and lightweight, coming in at just 1.4 kgs. There’s a small selection of ports but they have been chosen with careful consideration. On the left is a Thunderbolt 3 port – doubling up as a power delivery port, and display port – power port, and HDMI 2.0 out port. On the right, one gets a USB 3.1 Gen 1 port, 3.5mm headphone jack, and an SD card slot.

The biggest change in the design vis-a-vis its predecessor is the revamped hinge. There’s a new ‘garage’, as Dell calls it, that houses the full-size stylus. It’s a really convenient spot to reach out to no matter what mode – tent, stand, tablet, or conventional – you’re using the laptop in.

The black all-metal chassis doesn’t add much. Don’t get me wrong. It’s premium through and through. Just that Dell hasn’t at all tried to push the boundaries. They’ve chosen to play it safe, unlike the revamp that the Dell XPS 13 got in January of this year.

The chiclet-style key layout has a nice key travel, and is comfortable to type on for hours on end. The keyboard is backlit, with two-stages of brightness, but it doesn’t really get that bright. What I like is that dell decided to keep a dedicated power button with a built-in fingerprint sensor. This allows one to quickly sign in to Windows, bypassing the need for a pin/password.

Dell’s displays are always well-regarded across the industry and that doesn’t change with the Dell Inspiron 13 7391. One gets a 13.3”, 4K UHD (3840 x 2160) with thin bezels around the top and the sides. It’s a bright display with vivid colours and good viewing angles. Additionally, one gets Dell’s ‘Cinema Color’ profile that enhances the contrast and saturation of the content being viewed on the laptop.

Though the display lacks HDR, it has support for Dolby Vision (which adds better detailing).

The laptop has been fitted with the latest processors from Intel. It’s got the 10th-gen Intel i7-10510 processor alongside 16GB of RAM, and a 512 solid-state-drive (SSD). It’s the presence of the latest processors that make a difference. The laptop flies while performing day-to-day tasks. Even photoshop (a heavy-usage application) runs fairly well. I had no problem with having 30 tabs open across Microsoft Edge and Google Chrome while watching a video in the background, and using Skype to talk to friends and family.

The advantage of having an SSD means that the laptop boots quickly and file transfer happens speedily.

The absence of a discrete graphics card shows that the Inspiron 7391 2-in-1 laptop isn't meant for gaming. Nonetheless, we tested its graphics by playing a few games like Counter Strike and Age of Empires. The frame rates dropped significantly, and the laptop heated up during our extended gaming sessions.

To its credit, the laptop never slowed down. It was only noticeable after lengthy gaming sessions or an hour of photoshop.

To keep the heat from getting out of control, and to calm down the fans (they just never stopped whirring), I had to keep restarting the laptop. The Adaptive Thermal technology failed to kick in to adjust the performance.

Battery life was just average. I managed to eke out a day’s performance with medium usage but whenever I stretched it, with gaming, it died much earlier than I expected. Also, I noticed that sometimes when I closed the lid, it wouldn’t go into sleep mode. The standby on this laptop is inexcusable.

One needs to keep the laptop on a table when using it in tablet mode, otherwise, it’ll be too heavy to hold with one hand. It also feels strange on one’s lap with the keys pressing down on your knees at all times.

However, the stylus was comfortable to hold and use, and all the clicks and touches were registered without any noticeable delay.

What can be improved

The touchpad: It’s way too sensitive, and prone to buttons being pressed accidentally.

Battery: When closing the lid, the laptop doesn’t go into sleep mode. A simple software update can fix it.

Fans: The fans are way too noisy for the most part. It can be heard even above the music that was playing.

Gaming: Though it lacks a discrete graphics card, but even casual gaming makes the laptop heat up excessively.

Speakers: The speakers are good and crisp, but the sound level is all over the place. Even at full volume, the sound can be soft.

If you really want a two-in-one laptop, and don’t want to shell out nearly Rs 2,00,000, then go for the Dell Inspiron 13 7391. It’s a feature-packed laptop that has a nice premium aluminium construction and a portable form factor. Just don’t expect to perform high-end tasks and/or play games on this laptop.

On the other hand, one can go for a traditional laptop, like the Dell XPS 13 (that has crazy good performance) or the HP Spectre x360, the best two-in-one convertible in the Indian market today.

The Dell Inspiron 13 7391 starts at Rs 90,290 for the Core-i5 model. With the HP Spectre x360 starting at Rs 99,990, there is absolutely no reason to go for Dell. HP Spectre x360 is one of the most well-crafted convertibles in the market and it’s a performance beast.