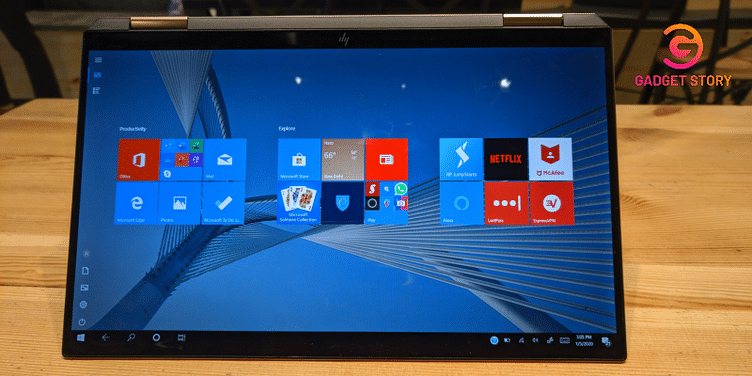 HP’s new Spectre x360 is already on sale in India. It doesn’t come cheap, but if you’re looking for an ultraportable, this one is worth your attention.

The HP Spectre x360 has long been a major contender for the title of the “best 2-in-1 convertible Windows laptop”. Last year, when Dell launched a 2-in-1 variant of the XPS 13, it gave HP some sleepless nights. But, because Dell didn’t launch that model in India, HP continues to have an upper hand in the market.

The Spectre x360 is an attractive and lightweight 2-in-1 convertible laptop for those looking for a premium offering. It includes Intel’s 10th generation Ice Lake CPUs and also comes with a dedicated mute microphone button.

The trackpad has gotten a massive upgrade. HP has finally switched from the poor Synaptic drivers to the newer Precision drivers. The large surface area and the use of glass make the trackpad better than ever before, and the gestures work quite beautifully.

We tested the Spectre x360 for two weeks and here’s what we thought of it.

The Spectre x360 feels premium, and its solid build quality makes it stand out in a crowded market. It weighs a comfortable 1.31 kg. The top and bottom bezels have been slimmed down by over 50 percent, and the screen-to-body ratio now stands at just over 90 percent.

If you’ve never used a diamond-cut Spectre x360 before, you’re going to struggle initially in finding the power button. It is located on the tiny diagonal section on the back-left of the keyboard.

The power button is actually a work of genius. There is no way that you would accidentally press it. The back right has the USB-C port for charging the laptop.

The left body of the Spectre x360 has a USB-A drop-down port and a headphone jack, and the right side sports a microSD card slot and two Thunderbolt 3 USB-C ports along with a Webcam Kill Switch.

There’s a microphone mute button, a fingerprint reader, and a really small infrared webcam (with support for facial recognition via Windows Hello) too.

The Spectre x360 has a 13.3-inch display (1,920x1,080 resolution) and comes with a 4K OLED touchscreen option. The regular display works fine for day-to-day tasks, with the IPS panel holding up colours with relative ease, even though a few notches below the OLED display.

The only hitch is the display comes with a 16:9 aspect ratio, which is more optimised for entertainment than productivity.

The backlit keyboard on the Spectre x360 is the same as on its predecessors. The buttons have a good spacing, but the key placement could have been better. The column of cursor keys on the right feels slightly odd and takes a lot of getting used to.

You might even accidentally press the ‘end’ or the ‘home’ button a few times, while wanting to use the ‘page up’ and the ‘page down’ keys.

The trackpad though gets a major boost in this iteration of the Spectre x360. The gestures are far better and much more reliable than they’ve ever been.

With the laptop not having any place to house the stylus, you naturally end up using it a lot less. But, the stylus is smooth as promised by HP.

There are two speakers on the bottom left and right of the Spectre x360, and these are powered by audio manufacturer Bang & Olufsen.

The output isn’t too loud. To get the most out of the speakers, you have to keep playing with the Bang & Olufsen software. However, for an ultraportable laptop, the speakers put up a decent performance. If you still want more, get a powerful external speaker.

The Spectre x360 can run really long. The battery unit is smaller than on the last-gen Spectre x36, which means it lasts a few hours less. But, you comfortably get 10 hours of usage on a single charge (almost an hour more than what the Dell XPS 13 ultrabook  gives you).

This is a boon because the charger that is bundled with the laptop is bulky and inconvenient. We could manage about 11 hours without having to charge.

The Spectre x360’s webcam is strictly okay for video calls. However, some manufacturers offer better. The big plus is the Webcam Kill Switch, which increases the privacy quotient of the laptop.

Verdict: is it worth the buy?

If you’re scouting for a 2-in-1 ultraportable laptop, there is nothing that comes close to the Spectre x360. The problem, however, lies in the price. This machine doesn’t come cheap.

That is on par with the Dell XPS’s high-end variant. Between the two laptops, it ultimately boils down to your preference in the form factor. Each has its pros and cons, but you can’t go wrong with either purchase.