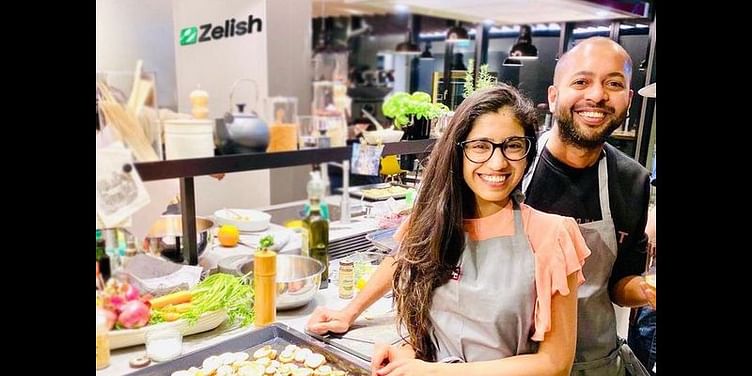 Bengaluru startup Zelish not only helps you with meal planning, but also delivers the items needed to prepare them. It wants to make 'ghar ka khana' more appealing for millennials.

One glance at social media platforms in the last two weeks tells you that cooking has turned out to be a real challenge for ‘locked-down’ millennials worldwide.

One, they are without house help. Two, they have to manage with minimal supplies, which makes meal planning all the more difficult. And three, meals have to be planned not once but at least thrice every day since everyone’s at home now.

Not easy, going by their social media chatter.

The hashtag #CurfewCooking or #LockdownCooking has registered tonnes of tweets and Instagram posts. There’s some assistance, with scores of food bloggers milking the opportunity with recipes, hacks, how-to-cook videos, and so on.

But, Bengaluru-based entrepreneurs Rakesh Edavalath, Saakshi Jain, and Arpit Joseph have found a concrete solution to this. Zelish, a startup the trio founded in April 2019, came out of the pilot stage last month and launched commercially.

What is Zelish and what it solves

Zelish is a kitchen management app that marries good-old ghar ka khana (which Indians living alone pine for) with new-age tech that millennials are likely to fancy. Its assisted cooking model seeks to unify all the "disjointed aspects" of a homemade meal.

Rakesh, Saakshi, and Arpit—former colleagues at MyGate—started Zelish after their own struggles with meal planning. They say that it often seemed like cooking was “being imposed” on them, causing “constant turmoil” in their lives.

As a result, they would often end up repeating food ideas, and experimentation was left only to eating out or ordering in.

“Indians eat most meals at home but figuring out what to make every day is a real challenge. It is even more difficult because we think of meal combos and not just one-pot meals. Add to that, the efforts in grocery shopping, finding the right quantity of things, the choices available, and you end up wasting a lot of time and effort. So, it is about time that technology seeps into our kitchens and adds convenience the way it has in other aspects of our lives."

Zelish launched in Bengaluru last month, and will be adding more cities. The startup also made it to the BSH Future of Home Accelerator powered by US-based Techstars.

Research estimates that India has 40 million middle class households where both partners are working and are responsible for kitchen chores, including cooking, grocery shopping, visit to the supermarkets, etc.

It is this time-crunched demographic that Zelish is targeting with its millennial-friendly platform, and it looks to reach 10,000 users by the end of this quarter.

“Zelish asks a few questions to understand your meal preferences, and then draws up a daily plan for you. These are usually combination meals like rice/roti, one dal, one sabzi, and so on. You can customise it as well. Based on your selection, the app tells you what ingredients and their quantity you need to prepare the meal. It also auto populates your grocery cart, and once you approve the items, we source the supplies from a local grocer.”

The startup has tie-ups with local kiranas and supermarkets. Until now, it was self-delivering items, but is planning to rope in a small delivery fleet as orders grow. Under normal circumstances, orders are delivered in 24 hours, but the lockdown has slowed that down.

The founders say they are currently in talks with online grocers to add scale and optimise deliveries. That would allow users to auto-export grocery lists to the third-party platforms.

Zelish has also enabled a feature that lets them search for recipes by entering names of ingredients.

“This helps you decide what you can cook based on the stock you have at home. Since we are in the middle of a lockdown, the aim is to focus on meals that require less ingredients and have a longer shelf life." Saakshi explains.

The platform houses 1,000+ recipes across cuisines, and plans to grow that by 10X. It has also introduced a ‘Share With Cook’ feature through which users can directly export recipe videos from the Zelish app to their cooks on WhatsApp.

“Our surveys have shown that 80 percent of cooks employed in urban households use WhatsApp. We’re trying to utilise that,” the co-founders reveal.

The startup is also building IoT connectivity that will make it integrate with smart kitchen appliances and automate the cooking process. Users would then be able to control their cooking appliances remotely and perhaps even get Alexa to read out recipes.

Zelish operates on a B2B2C model, and makes money through affiliates (supermarkets, grocers), where it earns a commission on each transaction. Going ahead, it plans to explore brand partnerships to recommend products to users.

It could even launch subscriptions on customised meal plans for diabetics, cardiac patients, and those with other lifestyle ailments.

Zelish is backed by undisclosed angel investors, and it looks to raise funds after crossing 10,000 users. While coronavirus-led market uncertainties could impede that, the founders believe that the rising demand for easy-to-cook (quarantine) meals will keep them going.

Zelish is modelled on global meal planning apps like Mealime, Yummly, FoodPrint, Spoonacular, and others. The founders say their goal is "to assist people who have never entered a kitchen before, and relieve them of the stress of daily chores."

Given our current situation, who wouldn't want a stress reliever?