These four women fought all the odds to fulfil their dreams 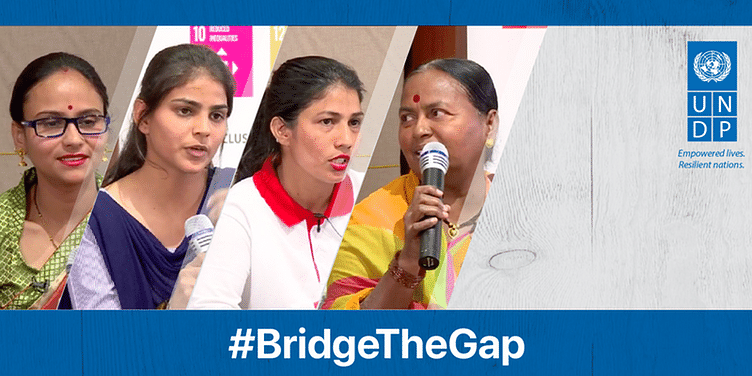 Four women, four unique journeys, one common destination: to be independent, transform their lives and make a positive impact on the lives of others. At a recent event in New Delhi to mark International Women’s Day this March, hosted by the United Nations Development Programme, Parvesh, Monika, Darshana and Sushila tai, whose lives have been transformed by their participation in various UNDP-assisted programmes, shared how they overcame challenges, blazed trails and are paving the way forward for others in their communities.

Their stories are particularly relevant at a time when gender bias and violence against women is still widely prevalent. A report by the UNDP revealed that 90 percent of men and 84 percent of women worldwide held some biased attitudes towards women. This included the belief that men made better leaders and executives, education was more important for a man, and perhaps most shockingly, 30 percent believed it was okay for a man to beat his partner. Each of these women’s lives resonated some of the challenges that women face today, whether it is bias in the workplace, societal discrimination, or domestic abuse.

When the sky isn’t the limit

The first speaker at the event was Parvesh, who is raising her six-year-old daughter as a single mother as her husband works in Karnataka. She said she was at the event to ‘hold up a lens to a life that was very different from what many in the audience may be accustomed to’. Parvesh’s challenges began early in life when she expressed her desire to study Science after graduating Class 10 from her school in rural Haryana.

Despite her family dissuading her father from letting her go to the neighbouring town to study Science, Parvesh was adamant. However, she was forced to quit college in her second year and take up a job as a school teacher to fund her brothers’ education after her father met with an accident. She faced a lot of harassment there as her male colleagues saw her as ‘young and available’. But she stuck with the job to look after her family and even saved some money, which she used to pay for college after her father recovered.

Marriage put an end to any career dreams she had as her in-laws were not supportive of her decision to work. It was only when her daughter turned three, that Parvesh threatened to file for divorce if they continued to restrict her. “They allowed me to do a part-time job as they were convinced I would quit,” she says.

It was while working with the Health Department in Haryana that she first came in touch with UNDP’s Disha Programme and the Yes Center and learned about the two-wheeler trainer programme. It was run by the Ek Pahal Project, a first-of-its-kind two-wheeler programme for women run by Hero MotoCorp Ltd., in association with Government of Haryana and UNDP.

As a trainer, Parvesh says she meets girls who come from village ITIs who believe the traditional restrictions on them are justified.

“I tell them the traditions that hurt us can never be good for us. Why are these restrictions only on girls?,” she said.

Today, she is proud to have personally witnessed the transformation of girls through mobility training and aspires to continue working on women empowerment in Haryana. Most importantly, she is setting an example for her six-year-old daughter that ‘women don’t just belong in the backseat’.

The Ek Pahal Project is also empowering women like 21-year-old Monika. Growing up amidst a lot of financial challenges, she says there was no money to pay for her to study Science after Class 10 as her parents could not afford tuition classes. She was married off by the time she turned 19. Like Parvesh, Monika’s in-laws had said she could study after marriage, but things took an ugly turn when her requests were met with violent domestic abuse. “I was cut off from my family and I can’t even describe the level of abuse I faced. But I was determined to study and was sick of being beaten daily,” she says. Monika soon filed for a divorce. “As soon as it came through, I joined the ITI,” she says.

Monika thanks her trainers for teaching her that she could be independent.

“I never thought I would be trained like this for free. Thanks to the Ek Pahal Project, I can ride a two-wheeler and I have my own licence. When I drove a motorcycle for the first time, it felt like I was touching the sky. I also have my own identity for the first time thanks to my licence,” she says.

Both women feel that girls need to fulfil their potential by studying and being independent.

“Women have to support each other. We are our own worst enemies and hold ourselves back. We are no different when it comes to potential and we have to help everyone, whether they are male or female,” said Parvesh.

A carepreneur, Darshana, is also empowering others in her community.. Growing up, all she wanted was to serve the nation and help others. That changed when she was married at 19. “I became completely involved in my domestic duties and did not want to disappoint my family and in-laws. Soon, I felt lost and had no identity. I was frustrated and crying all the time,” she says. It was when Darshana became involved with the Meraki Foundation that she first found out that 90 percent of a child’s development happens by the age of six.

“I realised my own children were deprived of opportunities. So, I decided to not only help other children, but help women find their voice and have the opportunities I was denied. I wanted to be a role model. If I inspire one person, I will be very happy.”

Today, Darshana is a carepreneur and runs a centre for children and their mothers.

“ I had no money or space at home. My training at Meraki made me realise that it was okay to start in a small room. When my first student Pari joined, I was ecstatic,” she says.

She continues to go out into the community and slum areas, “I have seen women want to do a lot and ask her for jobs. Many are not educating their children owing to lack of money. Others are not working because they have small children at home. If my centre gives someone the time to get a job I will be very happy knowing that I have given them freedom,” she says.

“When we earn our own money, we gain respect and feel more valued. If other women get inspired from what I am doing as an entrepreneur, that would truly make me happy and proud,” she said.

A truly inspiring example of how financial self-reliance can help women inspire each other is Sushila Sable or Sushila tai, as she is fondly called. She was only 10 years old when she moved from her drought-ridden village to Mumbai with her mother to earn a living, due to their extremely impoverished condition.

To make ends meet, she began collecting waste in Mumbai with her family.

“I was still working as a rag picker two decades later, when I met with volunteers from Stree Mukti Sanghatana, a local NGO. They educated me on the importance of segregating waste before selling it, which fetched better income,” she says.

Sushila tai knew she had found her calling. Within two years, she started a self-help group of women waste pickers and soon saved enough money to start a dry-waste collection centre.

Sushila tai quickly realised that waste segregation not only increased her income, but also had a larger positive impact. Once connected to UNDP’s Project Prithvi with HCCBPL, she soon became the president of the Indian Waste Pickers group. She has also represented India at the UN Framework for Climate Change in Copenhagen 2009, Beijing 2010, Durban 2011, and Rio 2012, where she spoke about the critical role waste pickers play in combating climate change. Sushila tai has also campaigned at these international platforms advocating for waste-pickers to get a pension, health insurance and good education for their kids.

At the event, these inspiring women were also joined by key stakeholders of the UNDP and other UN stakeholders who discussed the challenges that existed in creating an equal world and what we could all do to bring about that change.