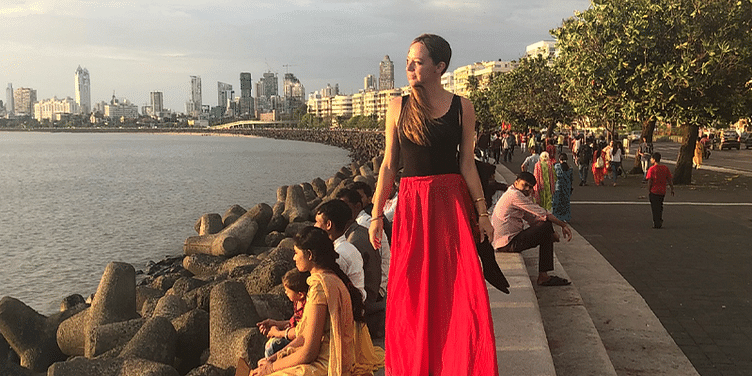 Swedish wine expert Cecilia Oldne came to India for the first time in 2007 when ﻿Sula Vineyards﻿ Founder Rajeev Samant offered her a job after a chance meeting.

The two had met three years before at a wine exhibition in Cape Town, South Africa. At the time, Cecilia was running her own wine business in Stockholm, Sweden focusing on ’new world’ wines.

“I was working on sales, marketing and distribution of ’new world’ wines that  included wines from South Africa, Argentina, Chile, and Mexico. I was also consulting for other wine companies and took on select assignments,” Cecilia tells HerStory.

One such assignment was being in charge of the wines served at the prestigious Nobel Banquet (that takes place after the Nobel Prize ceremony) in 2007.

Sula reached out to Cecilia at a time when she was looking for a “global challenge and change” and exploring Thailand, China, Japan, and the Middle East because Sweden “felt too small”.

“I was looking at starting a business in or around Asia. I wanted to go someplace where I could make a difference, be an inspiration, thought leader, part of a developing industry, create job opportunities and at the same time, also make money.”

Cecilia was always “drawn” to India.  As a teenager, she was  “fascinated” by Indian Gods and Goddesses and her favourite scent and incense stick at home was Nag Champa.

The decision to move to India was not hard for Cecilia. She had always been a “bit of a rebel”, having moved away from her parents’ home in the Swedish countryside of Karlstad to Stockholm at the age of 16. She says her family was supportive of her decisions throughout - whether it was moving away from home as a teen or moving to India alone.

Cecilia says, “Rajeev’s offer was hard to resist. How could I say no to joining one the fastest growing companies in one of the fastest growing wine industries?” Also the fact that her father, Christer lived part time in Thailand, was an added attraction, since taking up the job in India would mean being closer to him for some parts of the year.

The move to India

Cecilia’s first year in India was “intense and challenging” as she adjusted to a completely new life and environment. “As I had spent a lot of time in Thailand, much did not come as a surprise, but at the same time a lot did too.”

She had arrived in India expecting the climate to be warm. “I arrived in December and it was the coldest in 30 years. My house had no heater and I had not carried my winter clothes. Coming from an often cold Sweden, I remember freezing.”

Her first six months in India were spent at Nashik where the vineyards were (now Sula has them in Channapatna too), after which she moved to Mumbai and has been there since.

To add to her initial pangs, the different rules, regulations and taxation across states seemed all too puzzling in the early days. “As a matter of fact, I still fail to understand some, as they don’t make sense. For example,  the same bottle of Sula had at that time over 15 different labels with different prices, which is also a logistical nightmare. India, I soon learnt isn’t just one country, it is a continent where all states act like a different country and could easily be compared to say, Europe.”

She soon fell in love with the country and the diversity it offered.

“Being part of a flourishing business, a booming industry and at the same time, to be able to create job opportunities for so many people, kept me going. I climbed the ladder at Sula fast to the role of Vice President.”

Being a woman in a male dominated industry was not easy, nor was adjusting to the very different Indian work culture. With time she aced both.

“It was tough to be a woman and that too a boss in a very much male-dominated industry. I had to prove myself to get respect, which eventually came my way. “

Cecilia spent a decade spearheading Sula, being at the forefront of the ‘Indian wine revolution’ which she says “was truly an exciting, extraordinary and rewarding journey”. In 2017, she decided to move on from Sula, but continues to be a part of the company as a shareholder.

Cecilia had always wanted to be her own boss and for that reason there was initially a hesitation in joining Sula and working under someone else. But it’s a decision she says she does not regret.

“I have never regretted my move and working with Rajeev Samant. A Stanford-trained engineer, he is a true visionary and one of the most intelligent men I’ve ever  met. I have learnt so much from him.”

During her tenure at Sula, the company grew to become India’s and Asia’s largest wine producer crossing a production of one million cases. Today, Sula is the market leader with a 65 per cent share in the domestic market.

In 2008, starting the SulaFest, a two-day music festival that attracts thousands of people, was a milestone for both the company and Cecilia. “Marks and Spencer’s listing our wine was another milestone. Never before did they have an Indian wine on their list. Introducing Sula to new countries and clients, being instrumental in putting India on the world wine map is something I still feel very proud about.” Sula today exports to over 25 countries.

At the company, Cecilia was also looking after Sula Selections, which is today is one of India’s leading wine and spirits importers. It has brands such as Hardys, Le Grand Noir, Beluga Vodka, Asahi Beer and Botanics Gin in its portfolio.

“One of my last big projects with Sula was launching a new winery and wine called Kadu, which means wild in Kannada. Kadu is located in Channapatna outside of Bengaluru. Part of the proceeds from  the wines go towards spreading awareness around tiger conservation.”

Cecilia decided to move on from Sula after 10 years as her priorities in life had changed. “Being a VP at a company such as Sula often takes 100 per cent of your time. I wanted to be involved in more projects, learn more about different industries and inspire even more people globally. I think it is important to reinvent yourself from time to time.

She is the Managing Director, South East Asia for Amphora Portfolio Management, London’s leading fine wine investment firm. “We build portfolios of fine wine for our clients. I invested in fine wines around five years ago and this has been another great investment of mine. Not only has fine wine outperformed the turbulent equity market over the past 15 years, it has also provided investors with far more stability.” She is also setting up a $20 million Fine Wine Fund out of Singapore with the Amphora team.

Cecilia is on the committee of the sought-after Soho House Mumbai, a membership club for people in the creative field. The Mumbai house is the first one in India.

“With SIBC, I am also involved in organising delegations to and from India. SIBC is also the Swedish secretariat for India-Sweden Business Leaders’ Roundtable, a high-level platform for business leaders from Sweden and India to identify joint challenges in the fields of research, innovation, investments, financing, trade, business, industrialisation and regulatory issues which need to be addressed to forge a strong and durable relationship between the two countries.”

Cecilia is also an angel investor and an adviser to companies.

Her last investment was in a gaming company. “Tech and AI are areas I am getting more and more involved in and I also love the knowledge that comes with it. When I join a company as a strategic investor, I ensure I bring a different mindset and experience to the table so that I can be instrumental in its growth ” She helps raise capital for companies, projects and people she believes in - from broadcast media, to life science to diamonds.

In 2010, she co-founded the Asia Wine Producers Association with Australian wine writer and expert Denis Gastin. The organisation connects Asian wine producers so that they can learn from each other and grow together. “Many Asian wineries share the same challenges and opportunities,” she says.

She is a mentor for Girls Club Capital Foundation in New York, an organisation started by international ultra-marathon champion Ashmoret Mishal to create a support ecosystem for women-led companies around the world. “We empower women to pursue their entrepreneurial ambitions.”

When Cecilia was first offered a job in a wine company in Stockholm, she candidly admits she knew very little about the industry.

“The offer came to me because of my educational background in marketing and international business and for being known for thinking out-of-the-box.” She reminisces that back then she had wondered if wine was a good business to get into. “I concluded that whatever happens in the future, people would always want to eat and drink wine for many different reasons.

“Napoleon Bonaparte once said: ‘In victory, you deserve champagne; in defeat, you need it.’ And I couldn’t agree more!”

In her first job in a wine company in the Swedish capital, she realised she needed to know more about the product than her clients to be most successful in the business and that is when she decided to become a sommelier. A sommelier is a trained and knowledgeable wine professional who specialises in all aspects of wine service as well as wine and food pairing.

Modernising Ayurveda: This woman entrepreneur is bringing holistic wellness to the doorstep