How timing works – and how to make it work for you 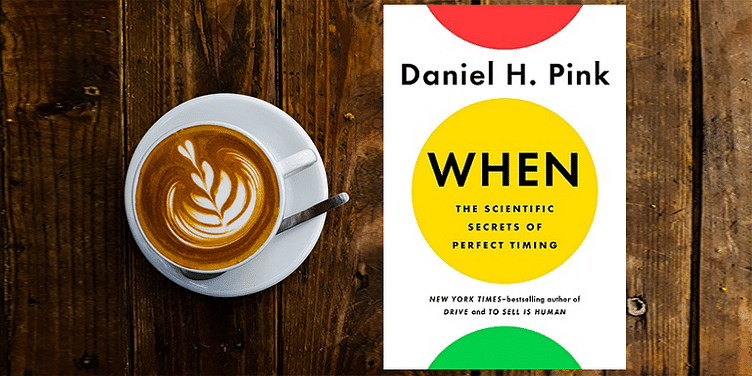 The dynamics and properties of timing, and its effect on our lives, are well explained in Daniel Pink’s book, ‘When: The Scientific Secrets of Perfect Timing’.

Productivity, creativity, motivation, goal setting, and even success have a strong correlation with timing. Understanding how timing works in different contexts, and how to make it work for you, is important at multiple levels – personal and professional, individual and organisational.

Daniel Pink is the author of six books, including To Sell is Human: The Surprising Truth about Moving Others (see my book review here). His current book, When, is a mix of storytelling and actionable tips at the end of each chapter, which he calls ‘Time Hacker’s Handbook.’

Combining a range of research from psychology, biology, economics, and management, the book shows how to effectively harness the power of timing in our lives. The material is entertaining and informative, and makes for a practical and straightforward read.

The chapters are spread across 260 pages, including 26 pages of notes and references. Here are my key takeaways from the book, summarised as well in Table 1 below. See also my reviews of the related books What you do is who you are, Multipliers, The Culture Code, Trillion Dollar Coach, The Messy Middle, and The Moonshot Effect.

In addition to the ‘bell curve’ of distribution, another important curve in life is the ‘U’ curve, Daniel explains. This curve of ‘peak, trough, and recovery’ reflects moods, energies, and behaviours of individuals across the course of the day.

People are of three chronotypes – larks, owls and ‘third birds’, according to Daniel. Larks have peak energy in the mornings, followed by an afternoon dip, and a shorter peak in the evening. Owls are the opposite, but most of us are ‘third birds’ with behaviour patterns between these two ends. This behaviour can also change with age (larks at young ages, owls in puberty).

Depending on one’s chronotype, one should choose to perform analytical tasks at the higher peak, and tasks requiring insights and creativity at the second peak. In terms of physical activities, Daniel recommends doing weight-loss exercises in the morning, but heavy-duty exercises in the evening when lung function is highest. Since we wake up mildly dehydrated, drinking a glass of water is good first thing in the morning.

“Afternoons are the Bermuda Triangles of our days,” Daniel cautions, pointing to statistics of low office productivity and even medical accidents in the afternoons. Vigilance breaks for teams after lunch are key to once again revise important checklists, regain individual and collective focus, and reaffirm that everyone is in sync.

Cognitive fatigue after lunch shows up in settings ranging from schools to courthouses. Restorative breaks are important in this regard, to bring up energy and moods. Daniel advises frequent short breaks (even ‘micro-breaks’), movements (stretches, short walks), and nature breaks (preferably outdoor).

“In most endeavours, we should be awake to the power of beginnings and aim to make a strong start. If that fails, we can try to make a fresh start,” Daniel advises.

Temporal landmarks can serve as important motivators in this regard, such as the New Year, wedding anniversaries, the beginning of the week or month, the start of a semester, or anniversary of a product launch.

Some landmarks are social and commonly accepted, others are personal (eg. birthdays). This “fresh start effect” allows people to open “new mental accounts”, Daniel explains. It enables people to slow down and plan better for the future. Celebrating small wins along the way also helps keep up the momentum and conveys a sense of progress.

“Sometimes, hitting the midpoint – of a project, a semester, a life – numbs our interest and stalls our progress. Other times, middles stir and stimulate,” Daniel explains. The ‘U-curve’ shows up here as well, in the way life satisfaction is high in early adulthood, dips towards the fifties, and picks up afterwards.

Expectations and forecasts are high in the early phases of life, followed by disillusionment, and then adjustment of aspirations. Awareness of the mid-way slump in a business project can serve as a wake-up call, and inject a healthy dose of stress and motivation. In sports, being slightly behind the opponent at half-time can be particularly motivating, as seen in many basketball games.

Daniel recommends setting interim goals in long tasks, and publicly committing to these goals. Focusing on the final impact can also be a motivator. Reminders of how much progress has been achieved at mid-point– as well as how much still remains – helps. Companies should even provide employees and managers with mentors to be aware of these effects.

For example, there are noticeable spikes in first-time marathoners at the ages of 29, 39, and 49. They want to complete their first marathon by the end of the respective decade. This cousin of the ‘first start effect’ is the ‘fast finish effect’, Daniel jokes, referring to the sense of urgency at this phase.

People sometimes remember what happened at the end of these phases much more than what happened earlier (‘end of life’ bias). This is seen in politics in the form of the ‘election year effect’, where the final year of the candidate’s performance tends to be valued more than earlier years.

Towards the end of a phase (semester, job, life), we also actively prune our friends to those whom we consider to be more meaningful, rather than keep a ‘wide and loose’ network. Not all endings need to be happy (as seen in movies), but the more effective ones have a sense of poignancy, a bittersweet effect revealed in a larger but more complex truth.

“The best endings don’t leave us happy. Instead, they produce something richer – a rush of unexpected insight, a fleeting moment of transcendence, the possibility that by discarding what we wanted we’ve gotten what we need,” Daniel evocatively explains.

To craft “memorable and meaningful endings”, Daniel recommends tracking progress at the end of each day (along with expressions of gratitude), having a toast at the end of a semester or project, and ending a vacation on a particularly high note.

Drawing on examples as varied as Mumbai’s dabbawalas and NBA basketball teams, Daniel shows how timing and cultural fabric strengthen team performance. Even in the midst of Mumbai’s “throbbing, anarchic intensity”, lunchboxes are delivered “with military precision and punctuality”. A Harvard Business School case study on this operation was written up by Stefan Thomke.

Daniel shows how group timing is synchronised by a higher authority (boss, choirmaster, coxswain, time clocks), reinforced by a sense of belonging to the tribe, and elevated by commitment to a higher purpose.

Social cohesion in such teams is reinforced by coded symbols, dress codes, and physical rituals. This is seen in the address symbols on tiffin boxes, uniforms of chefs and dabbawalas, and gestures such as high-fives, pats on the back, and group huddles.

In the case of choirs, group singing is shown to calm heart rates, boost endorphin levels, increase sensitivity, and enhance a sense of meaning. Dabbawalas see their work as not just efficient delivery but as transcendence – connecting family members through mid-day meals.

“Coordinating and synchronising with other people is a powerful way to lift your physical and psychological well-being,” Daniel emphasises. He recommends group activities like music, dance, running, rowing, yoga, cooking and improv theatre to help achieve ‘uplift’ in this regard.

“One way that groups cohere is through storytelling,” he adds. This includes stories of success as well as failure and vulnerability. “Organic rituals, not artificial ones, generate cohesion,” he explains. This includes spontaneous emergent activities like gathering in a coffee shop before work or a pub after work.

The book ends with an interesting chapter on how various languages represent tense in different ways. For example, ‘strong future’ languages like English, Italian, and Korean require people to clearly distinguish between present and future. ‘Weak future’ languages include Mandarin, Finnish, and Estonian.

This book was written before the coronavirus crisis, and it would be interesting to survey research on how a crisis opens up a new sense of timing. A crisis represents challenge as well as opportunity, and it is high time systematic frameworks emerged for tackling crises in a society at multiple levels.

The author also advises readers to regularly record their lives and experiences, so that one can even view them later as a time capsule. This helps “make the present a ‘present’ for the future.” Life is not just about living in the moment, but tying experiences and expectations into a coherent whole.

“The challenge of the human condition is to bring the past, present, and future together,” Daniel signs off.