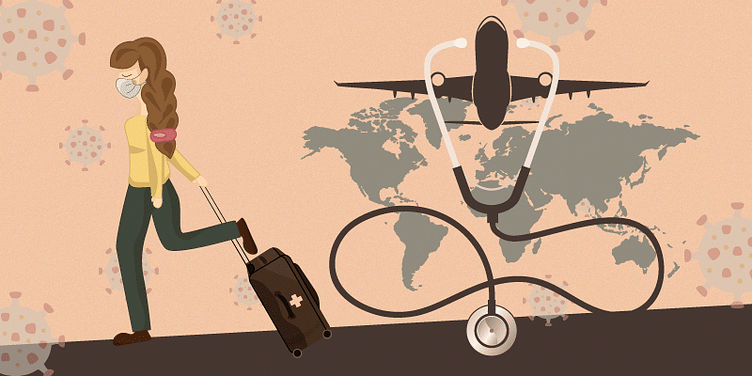 In 2019, India was ranked as the third most preferred destination for medical tourism, with the industry set to reach $9 billion in valuation in 2020. But with the coronavirus pandemic, the industry is now one of the worst-hit sectors with its survival being questioned.

“It has been two months; buying meals is not sustainable. The hotel owner has allowed us to use the common kitchen to cook rice. We have to stay back for another month at least,” says Sumitra Bashar (name changed), a medical tourist from Bangladesh.

On a visit to the Apollo Hospitals in Chennai, one cannot help but notice the lane opposite the main hospital building. Lined with cafes, restaurants, and fruit sellers, a walk inside any of these narrow lanes will lead to multi-coloured three or four storey buildings with posters reading 'Budget Hotels'. Lined next to each other, often sharing boundary walls, these ‘budget’ hotels are mostly occupied by medical tourists from Bangladesh, visiting south India to undergo treatment for chronic diseases.

Sumitra’s husband had undergone surgery for gastrointestinal cancer, with the recovery expected to take at least three months. Living on a constrained budget, eating out every day was not a feasible option for Sumitra, so, she cooked in the hotel kitchen.

However, this is not an individual case. Every year, nearly 1,50,000 patients travel to India from across the world to seek medical treatment, a report by the Ministry of Tourism stated.

Pivot and Persist: How the Kerala startup ecosystem innovated to survive COVID-19

The Organisation for Economic Co-operation and Development (OECD) states that patients in the US save between 30 to 50 percent of the cost of treatment from common ailments, if they travel to Asia or Latin America.

However, as international travel has come to a halt due to the coronavirus pandemic, the medical tourism sector has come to a complete standstill as well. Thus, the industry growth might not live up to the expectations.

Amit Sharma, Founder and CEO of eExpedise Healthcare, says that no international patients have been coming to India for treatment since March 15, when COVID-19 started spreading across the globe. “We have had zero revenue since before the beginning of the lockdown, but our expenses are still there,” says Amit.

Delhi-based eExpedise uses technology to enable NRIs and Indians living abroad to choose a healthcare provider in India, according to their budget and preferences. It generates its revenue from the referral or marketing fee from its partner hospitals. Amit further reveals that the referral fees, which have been due since January, are yet to be received by the company.

Similarly, Rajeev Taneja, Founder and MD of Global Care, says that in May 2019, the company’s average patient-hospital billing stood at Rs 20 crore a month. In May 2020, it generated a revenue of less than Rs 5 crore. “The little traction that we got was from patients who got stuck before the lockdown began. These are mostly chemotherapy or transplant patients who could not travel back,” he adds.

Further, Global Care has not received revenue from its partner hospitals either. “Hospitals are unable to pay us, because there is no business. We are yet to receive Rs 13 crore to Rs 14 crore from our partners,” he adds.

Based out of Gurugram, Global Care was founded in 2009 and is responsible for the treatment of up to 6,000 international patients in India, every year. This accounts for five percent of India’s entire medical tourism sector in India. Global Care works with leading hospitals like Fortis, Max, DLK, and Narayana Hospitals, and it has government contracts with the Ministry of Health - Iraq, Ministry of Health - Yemen, and Afghan Red Cross, among others.

While the impact of COVID-19 in the medical tourism sector seems to be catastrophic, Mihir says that there is a silver lining, and the future holds big.

“India was at the forefront and has supplied hydroxychloroquine to other countries, and we have sent our medical teams to the Gulf countries. Thus, once the situation normalises, India will emerge as a bigger brand and patients from developed countries will be more willing to get their treatment done here,” he says.

Speaking to YourStory, Rajeev reveals that Indian medical tourism companies are not expecting new patients until September this year. “The small traction that we get – 10 to 15 percent of last year – will be from the international patients who stayed back,” he says. However, it might go up in the third quarter, that is, between October and December 2020, to 25 to 30 percent, based on the current situation.

Global Care’s Rajeev says that investors, right now, are “not ready to touch” startups in the medical tourism space. Before the lockdown, Global Care was in touch with a couple of investors and was in advance talks for raising funds to expand to Europe and the US, however, “since the last few months, nobody has been talking about investments,” he adds.

Mihir has the same opinion and says that investments in the medical tourism department have dried up. “Investors are shying away and are looking for a perfect scalable model,” he says. Magnus Medi is hoping to raise a bridge round of funding. It had earlier raised an undisclosed amount in an angel round. “Magnus Media might not be able to survive Q4 without the funding,” Mihir adds. The company has announced salary cuts, but has not laid off any employees yet.

Similarly, for the last few months, Global Care’s employees have been receiving their full salaries, however, starting this quarter, it had to resort to salary cuts. The founders will not take any salaries for the next six months.

“We can manage to run the company until the end of this year, but the third quarter will be difficult. For the next three months, everybody will be home,” Rajeev adds. His company has developed an application to enable telemedicine for its existing international customers.

Magnus Medi has been looking at opportunities in the domestic market. It has built a second opinion model where patients can download the app and seek multiple second opinions at Rs 1,800 or $25 (for international patients).

How can the government help

Medical tourism companies have been talking to the Federation of Indian Chambers of Commerce and Industry (FICCI) to find solutions with the Ministry of Commerce, Ministry of Finance, and Ministry of Tourism, to help the sector survive during these unprecedented times.

Hospitals that are equipped with mechanisms to treat COVID-19 patients are not accepting patients with other ailments. And hospitals, not equipped with treating coronavirus, have no business coming in.

“The medical tourism industry employees up to 50,000 people directly and indirectly. These people, who have been earning foreign exchanges for the government and paying their taxes, are left with no revenue earning capacity. But no one has come to their rescue yet – no bailout packages have been offered to the medical tourism companies,” Dalip says.

Dalip suggests that the community has requested for a Rs 300 crore bailout package to help medical tourism companies pay the basic salaries to its employees, and for unavoidable expenses. “This amount is not more than 25 percent of what these companies have been bringing into the country,” he adds.

According to Dalip, the community has also requested to accelerate the process of tax refunds for these companies. Additionally, a request has also been made to instruct banks to relax the process of providing loans to medical tourism companies. The community has also requested the government to relax the medical travel visa fees. “Medical visas should have zero fees for the next six months to one year; this will be an incentive to medical tourism patients to visit India,” he adds.

Rajeev adds that the government should relax the policies for telemedicine and offer loans without collaterals. Lastly, Dalip says that the foundation has also requested the government to facilitate air travel from coronavirus low-risk but high-volume medical tourist countries.

However, the community and the Foundation of Healthcare and Promotion, India, are yet to hear back from FICCI.

According to Rajeev, the earnings of the Indian medical tourism industry has gone down by 80 percent, and are likely to further reduce to 95 percent. He says, “If we are hit by a second or third wave, which we are expecting by June-end and October-end, respectively, these expected tractions can change and the lockdown may extend for international travel.”

Similarly, Mihir suggests that a fear-factor will prevail as India’s number of COVID-19 cases is on the rise, with the country now the fourth- worst affected. “I don’t think medical tourism will get back to normalcy until March 2021, provided there is no second wave. But if there is a second or third wave, no medical tourism companies will exist by the end of this,” he adds.

With domestic flights kick-starting, and government officials talking about resuming operations of international flights, there’s hope for medical tourism players to get back to business. However, the question remains, will medical tourism startups be able to survive until the sector revives?

“Even when the travel ban is lifted, gaining the patients’ confidence to travel to India is going to be a challenge,” Amit adds.