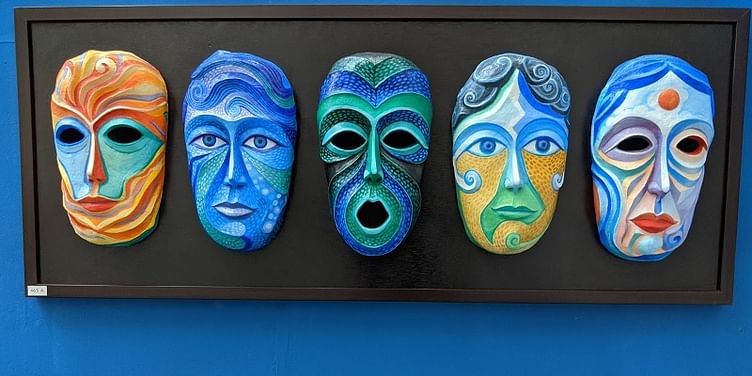 In this photo essay on the Goa Affordable Art Festival, we showcase a range of creative works along artistic insights on practices, methods and discipline.

With a wide selection of 900 artworks by 270 artists, the Goa Affordable Art Festival (GAAF) held its third edition at the Museum of Goa. A selection of these artworks was also brought to Bengaluru’s RMZ Ecoworld Gallery by the RMZ Foundation.

In this photo essay, we share creative insights from two of the exhibiting artists, Sonal Varshneya and Sitikanta Samantsinghar. See also our earlier interviews with Dr Subodh Kerkar, co-founder of GAAF and founding director of the Museum of Goa, and Anu Menda, Managing Trustee of RMZ Foundation.

(Note: These photographs from the exhibitions were taken before the national lockdown due to the coronavirus. The visit to the exhibition was not in violation of any public safety guidelines.)

“Art is a reflection of my thoughts, it is like a story which connects my feelings,” explains independent artist Sonal Varshneya, in a chat with YourStory. She sees art all around us – everywhere and in everything.

“Every part of nature has art in it. Those who are able to express their vision, thoughts, and feelings on paper and other forms are the ones who can become artists,” she explains.

Describing her artistic journey, Sonal says she grew up in a family where rituals were regularly followed, and religious objects were all around her. “That shaped the beginning of my work, and those objects became the subjects of my stories,” she describes.

Her works include etching and printmaking. “The soft lines of etching make my work delicate,” Sonal explains. She started off using black and white, and then moved on to other colours.

Some of her themes are on topics related to women, such as her 2014 series Ambubachi, about menstruation and its social perception. “I have worked on many such topics and want to explore more,” Sonal says.

She has also taught in the graphics department as guest faculty at Lucknow Art College. “I come from a middle-class family, where education is given a lot of importance. Making a future in art took a lot of struggle, but I had support from my family,” she recalls. Her husband is also a painter.

Sonal says she enjoys exploring art and receiving appreciation. “When I get praise, I get happiness and confidence that takes me one step further,” she proudly says. She has participated in the International Print Biennale (New Delhi) and has received awards from Lalit Kala Akademi and a fellowship from the Ministry of Culture.

For GAAF, Sonal prepared seven works in a series titled Emoticons. “It reflects changes in moods, which seem to have become very easy these days thanks to online icons,” she jokes.

Her series also incorporates elements from Indian mythology. “Even in contemporary art and culture, we can see the connection of mythological events. I believe we are all still influenced by the old stories, which are always seen in my work,” Sonal explains.

“An artist is capable of making a bigger picture than by speaking or writing,” she says. But this calls for a lot of perseverance by the artist, and engagement by the audience.

Her other projects are a series titled Ready to Red Carpet, about social and religious customs related to women. Her works are showcased online by Gallery Sumukha in Bengaluru. Some of her smaller artworks are priced around Rs 25,000. Sonal has also attended the China Print Biennale and art residencies in Taiwan and South Korea.

She advises aspiring artists to be prepared for the challenges in the long journey ahead. “As an artist, you need to develop your own style and identity. Have faith in yourself, work hard, and be aware of larger contexts and changes,” Sonal explains.

It can also be hard to find a market locally in some cities. “I have my own studio. There is not much of an art market in Lucknow. Art Houz Gallery in Chennai has been promoting me for many years, including at this year’s India’s Art Fair in New Delhi,” Sonal says (see YourStory’s coverage of the 2020 edition here).

Fortunately, she sees awareness about art increasing among the public in India. She advises audiences to enjoy art and not be swayed by impressions that visual art is very expensive.

“Enjoy simply looking at art. You may like the colours, or the story, or any features that appeal to you. It is not impossible to connect to art, though at times it may seem difficult,” Sonal sums up.

With art degrees from the Government College of Arts And Crafts (Khallikote, Odisha) and Amity School of Fine Arts (Noida), Sitikanta Samantsinghar sees art as a reflection of life, upbringing and purpose.

“My works have always been influenced by the social realities surrounding me, such as the destitution and disparities in my native village. Existing social power structures have led to the exploitation of poor farmers by zamindars,” he laments.

“I know that outsiders have a tendency to romanticise rural life, assuming that people who live closer to the land are more peaceful, centred, simple and free of stress,” he explains. “I still think there’s some measure of truth to that, but I’ve also seen how false an assumption it can be,” he cautions.

Sitikanta’s grandfather, Nrusingh Samantasinghar led a peasant movement in the 1950s in rural Odisha, called Bhaga Chashi Andolan. Sparked by the killing of a poor farmer named Sania, the movement called for a percentage of the agricultural production profit for farmers, Sitikanta explains.

Farmer suicides are a sad reality in India, he laments. “I engage with such histories of oppression in my art, often merging such realities with surrealist imagery in order to express issues and expectations,” Sitikanta says.

“Knowledge and understanding of universal and timeless qualities identify all great art. Appreciation of the art of different eras, movement, styles and techniques, can better an artist’s hypothesis,” Sitikanta explains.

For GAAF, Sitikanta created works blending watercolours, acrylic, collage, and tea ink. “They reflect the discordance and lost feelings of authenticity and spirituality in rural Odisha,” he explains. His other projects are focused on drought and its devastating impact. His artworks are priced around Rs 1.4 lakh.

Sitikanta is pleased with the audience enjoyment of his artworks at GAAF. “There was also nice feedback in the media, thanks to the GAAF team and RMZ Foundation,” he proudly says. His works have been exhibited in Bhubaneswar, Hyderabad, Mumbai, and New Delhi as well.

He also offers tips for aspiring artists. “My advice is to stay focused on your research. That will help you to find and define your own indigenous ways of making,” Sitikanta signs off.

Now, what have you done today to pause in your busy schedule and find new ways of expressing your creative core?