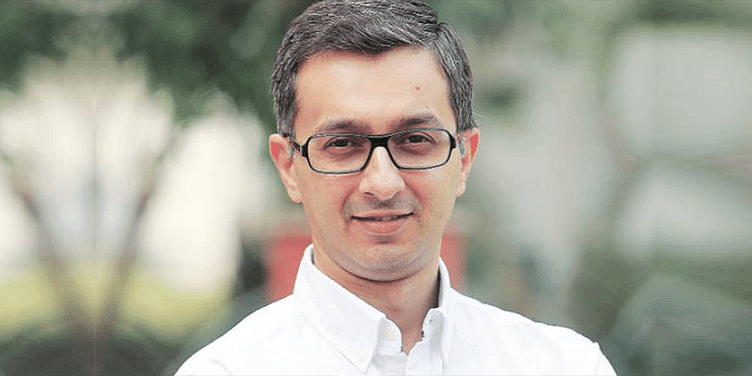 In this week’s 100x Entrepreneur Podcast, Dhruv Kapoor, Partner at mid-stage VC firm Sistema Asia Capital, speaks about exits and investing in high growth startups, and reveals that the VC is bullish on edtech, healthtech, and agritech.

Investor Dhruv Kapoor has more than 18 years of experience in the ecommerce, internet, mobile, and financial services industries. An alumnus of Delhi University and Symbiosis International University, he is currently Partner at mid-stage VC firm Sistema Asia Capital.

Dhruv started his career in 1999, as a Banking Officer at ABN AMRO; in 2004, he moved to McKinsey & Company as Senior Research Analyst. His last stint was Vice President, Helion Ventures.

“Given my experience in the investment management field, I was interested in the broader private equity venture capital space,” he says.

Russian conglomerate Sistema to speed up investments in Indian startups

Dhruv entered the VC ecosystem in 2008 when he joined Helion Ventures. There, he was a part of investment rounds in companies including ﻿Ezetap﻿, ﻿RailYatri﻿, Wooplr, Azure Power, and ﻿Moengage﻿, among others.

After spending eight years at Helion and getting his hands “dirty”, Dhruv joined Russian conglomerate Sistema in 2015 and decided to set up a venture fund in India. “I wanted to aggregate all my learnings and apply that to a platform where I could nurture it from ground zero,” he says.

At that point, Sistema’s VC was not a corporate but a financial institution. To Dhruv, it seemed to be the right platform to add value. “I could see myself laying the foundations of a venture capital firm,” he adds.

Dhruv would be creating the investment philosophy, guiding principles, and deciding what sectors Sistema would be focusing on and portfolio construction.

“There was a little bit of an entrepreneurial bug in me as well, which culminated in my joining Sistema in 2016,” Dhruv says.

Sistema launched its fund in India in 2016, focusing on mid-stage investments. “There were a handful of players operating there (in mid-stage). But there was a need for a dedicated Series B player in the market,” he adds.

Sistema’s aim is to help companies scale. “We look at companies where product-market fit has been established. Where there’s evidence of monetisation or business model evolution,” Dhruv says.

Having said that, he says Sistema likes its money to go towards helping companies scale. Sistema is sector-agnostic and its typical cheque sizes range between $3 million and $5 million in the first round. However, it eventually ends up backing portfolio companies between $10 million and $12 million, over the life of the investment.

In the last four years, Sistema has built a portfolio of about 10 companies. It had one exit: ﻿QwikCilver Solutions﻿. Sistema’s fund is a mix of Sistema Capital and 80 percent of its LP base, a Sistema group. The remaining 20 percent comprises Indian HNIs.

We plan to focus on driving the next billion market, says Ritu Verma, Co-founder, Ankur Capital

Dhruv says he had referred Qwikcilver to Sistema, even before joining the VC firm. Sistema invested in the company before Dhruv joined their team.

“The thesis was that gift cards comprised a large, multibillion-dollar market in the country. What Qwikcilver had built through its managed services business was a solution that pretty much had monopolistic characteristics, they were at 90 percent of the market,” Dhruv reveals.

Quikcilver powered gift card solutions for retailers, both offline and online. “We were conscious of the risk that were taking,” he adds. Sistema invested in Qwikcilver’s Series C round of funding. Two years later, QwikCilver exited to PineLabs.

Faaso’s has been operating for almost a decade, and Sistema joined the company during the Series C round. “But it was the right time because they were just stepping the pedal on the cloud kitchen story,” Dhruv says.

At that time, Faaso’s had 120-plus cloud kitchens, with four brands. It was able to leverage the back-end in infrastructure and keep launching multiple lines of cuisines from the same kitchen. Impressed by the scalability and the team that understood how to scale a business and had international aspirations, Sistema invested in the company. Since then, Faaso’s has been able to attract top-tier institutional investors and is on track to become the next unicorn of the country.

“Of course, COVID-19 has reset some of those businesses in a lot of cities that were under lockdown, but we feel very confident about the scalable model that they’ve built,”  Dhruv says. Faaso’s has scaled from 120 cloud kitchens to almost 300 cloud kitchens in the country. Dhruv is confident that its scalability will be back as soon as the situation normalises.

The VC firm invested in Licious in 2017, in its Series B round.

“What we liked about Licious was that they were organising a highly unorganised and fragmented market where almost 90 percent of the meat is sold through local butchers or the wet market,” Dhruv says. This meant not much attention was paid to hygiene, quality, and disease checks.

Sistema was inspired by Licious’ aspiration of building a pan-India brand, and eventually participated in the following funding rounds as well.

Dhruv reveals that Licious is one of the companies in Sistema’s portfolio that has seen strong tailwinds during COVID-19, with business doubling between April and May.

Sistema is still studying the long-term impact of COVID-19.

“If you look at China, and from what we understand, some of the metrics are back to pre-COVID-19 levels. People are back in restaurants, in theatres, and are travelling. If that were to happen in India, then I’m not sure what will fundamentally change. However, in terms of fundamental business models, there will be some impact,” Dhruv says.

Sistema believes that edtech is one sector that has experienced renewed interest during the pandemic. The focus will continue in the post-COVID-19 world.

Sistema is bullish on healthtech and edtech, and plans to broaden its focus in these two sectors. Other interest areas include disruption of technology in agritech, SaaS, and enterprise software. The fund will remain cautious about ecommerce or vertical commerce.

“We will continue to look at companies emerging out of India, but targeting global markets, that is US, or Europe or Southeast Asia. The stage that we like to come in is where the company has proven some international revenue stream,” Dhruv says.