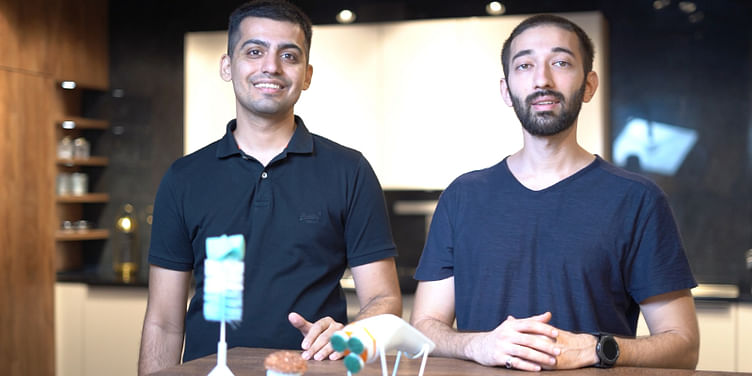 Product technology startup Hyper Lychee has launched a Kickstarter campaign for its first product, Skadu, an electric scrubber that will make short work of cleaning surfaces.

The COVID-19 pandemic and subsequent lockdowns brought urban India face to face with a harsh reality: our dependence on domestic help.

We learnt to cook, scrub, clean, and wash, and often wondered why we did not invest in a dishwasher or a washing machine.

Enter a product technology startup that wants to make cleanups easier. Santa Clara and Pune-based ﻿Hyper Lychee﻿ has launched an electric scrubber that can clean most surfaces.

Founded in 2017 by cousins Hannan Hakim and Juzer Saleem, the startup aims to solve everyday problems and improve quality of life.

“Scrubbing things clean is one of the most hated household chores, and eats up a huge amount of time. Our first product, Skadu, ensures you don’t need to scrub surfaces clean by hands. Skadu is a hand-held electric tool with a high torque motor that can clean surfaces without using your strength,” Hannan tells YourStory.

According to the co-founder, a Kickstarter campaign was launched last month and the product is currently on a “pre-order launch”.

Hannan says that the company has been named after the culture practised in the company. He believes that the four-member Hyper Lychee team is extremely hyper active in terms of work but are also soft, aka emotional, like a lychee.

Clean up your act with Skadu

A Skadu kit comprises the machine, a triple head attachment, scrub pads, and other attachments. The hand-held electric tool is designed to clean surfaces, with the three scrubber disks rotating in opposite directions.

“This creates a multiplier effect, drastically increasing scrubbing efficiency and allowing for effortless and speedy cleaning of grime,” Hannan explains.

Hannan explains that Skadu can be used to clean utensils, bottles, kitchen surfaces, and more. He says the electric scrubber’s attachments make cleaning things easier: the brush attachment can be used for bottles and glasses while the copper scrubber can be used to get rid of burnt and stuck food on kitchenware such BBQ grills and baking trays.

The device needs to be recharged and uses a negligible amount of power.

Why did the duo decide to launch this product? The idea was born after Hannan visited his uncle and aunt, who complained about the difficulties in scrubbing kitchenware clean by hand. This led the duo to develop the electric-powered scrubber; they launched their company with an initial investment of Rs 10,000.

The starting price of Skadu is $89, and goes up to $119, depending on the power of the product. The startup claims to have sold over 650 units. The products will be shipped across India and internationally from April onwards.

Hannan says the startup may not market this product in India in the foreseeable future as employing help for cleaning services is common practice in the country. But India remains a market.

“Our target audience is seniors and people who find it physically exhausting to scrub their home clean. However, we are also seeing a huge demand from men in the 25-45 age segment in metros,” Hannan says.

Business and the future

The co-founder says Hyper Lychee is looking to finance its operations through the Kickstarter campaign instead of opting for VC funding right now. He adds that they received some funding from their family members to develop the product.

Several cleaning products like Skadu are available in the market. These include self-wringing Miracle Mop, invented by Joy Mangano, and Robot Mops, which was launched by Massachusetts-based Braava, works on WiFi, and can be operated by mobile phones.

Speaking about the competition, Hannan says while other products only help clean surfaces, while Skadu helps eliminate the need of human effort in the process.

“Currently, we are focused on our Kickstarter and future products. We are being approached for investments, but are yet to take those talks forward,” he says. “Our Kickstarter campaign has been 100 percent designed and developed by us. We had set out to raise only $5,000 and managed to raise that amount in under 45 minutes of our 41-day campaign.”

Hannan claims Hyper Lychee raised $ 62,000 in one week of the campaign. He feels the number of people backing the campaign is lower than it could be due to the COVID-19 situation “We are seeing about a 40 percent drop compared to our test results conducted in early January,” he says.

The co-founder refused to disclose details about their future plans, saying Hyper Lychee would continue to “focus on engineering and design” and use technology to better hygiene and cleanliness. Basically, the startup wants to make it easy to clean up your act!