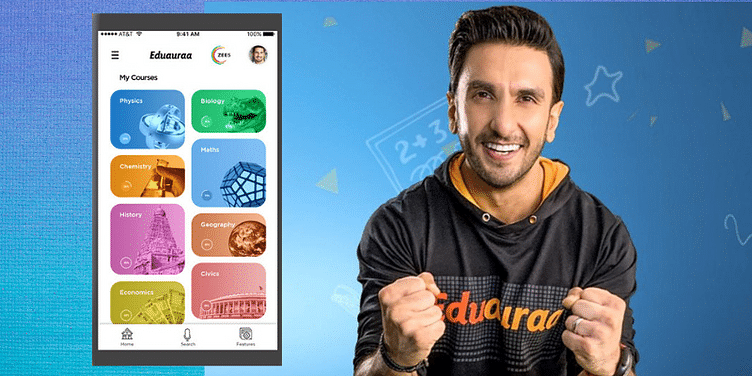 Mumbai-based edtech startup Eduauraa wants to make K-12 education as affordable as entertainment. It is riding on a unique distribution model and the brand power of Bollywood actor Ranveer Singh.

It is likely that 2020 will go down as the ‘year of edtech’ and the behavioural shifts in education are expected to outlast the pandemic.

It is also the second-most funded sector this year, according to YS Research, with edtech startups dominating headlines in the last few months.

But, does India really need another player in the K-12 segment, which is already a battleground of biggies like ﻿BYJU'S﻿, ﻿Vedantu﻿, ﻿Toppr﻿, ﻿Camp K12﻿, ﻿Meritnation﻿, and others vying for the consumer’s wallet share?

Possibly, yes. Because despite the hullabaloo around K-12, less than three percent of school-going Indians have access to online learning.

On the Global Education Index, India ranks a lowly 112th out of 188 countries — a sordid reminder of the wide access gap in learning that exists in the country.

Enter Eduauraa, an e-learning startup that aims to make education as affordable, standardised, and accessible as entertainment.

Founded in December 2018 by a 23-year-old Columbia University alumnus, the Mumbai-based startup wants to take K-12 education to every corner of the country, and “penetrate the 97 percent” that still remains to be tapped.

“Edtech subscriptions are still very expensive in India, ranging from Rs 50,000 to Rs 1.5 lakh. This makes them inaccessible for most of the 310 million K-12 students, who genuinely need online education, but can’t afford it. When we looked around we saw that these people had access to OTT apps like ZEE5, VOOT, etc. So, the question to ask was: Can we make education available the way entertainment is?”

After 18 months of content and product development, Eduauraa went live earlier this month. The app has already crossed 25,000 downloads. It reduces the entry barrier for e-learning by making 6,000 hours of K-12 content available for an “OTT price” of Rs 999 a year. That pricing is unheard of in edtech, and the founder knows it too well.

She says, “Our vision is to empower students from lower and middle-class backgrounds by removing the affordability barrier. Education should be a right, and not a privilege. We also realised that language was a barrier for students in India's northern belt. So, we launched our app in Hindi and English.”

Eduauraa provides interactive video lectures for ICSE, CBSE, and the state boards of Maharashtra, Rajasthan, Uttar Pradesh, Bihar, Madhya Pradesh, Chhattisgarh, and Tamil Nadu. Its focus is on STEM subjects, and the content caters to Classes 6-10. Lessons in History, Geography, Economics, and Civics are also in the works.

Besides the school syllabus, the ad-free platform also offers a range of value-added services (VAS) such as e-books, test papers, mind maps, MCQs, past papers, and practice material. Additional features include Eduauraa Proficiency Quotient (to analyse learning progress) and Eduauraa Assistant (to track and schedule studying).

All the content IP is created and owned by the startup.

“We spent over a year shortlisting India’s top schools and getting experienced teachers, subject matter experts, visualisers, animators, and producers to create the content in-house. Our focus was on building high quality interactive content that looks world-class, but is affordable. This is to ensure that kids stay engaged in the learning experience throughout. We’d tell ourselves that we’ve built a Rs 5 lakh product but priced it at a thousand.”

How does unit economics work in such situations, especially for bootstrapped startups? Do subscription revenues make up for the high product costs?

However, it has built an interesting distribution model through an alliance with OTT platform ZEE5. All 6,000 hours of Eduauraa content is available — at no additional cost — to ZEE5’s 75 million users through a bundled offering. Similarly, Eduauraa subscribers also get complimentary ZEE5 subscription with their packs.

’Tis the era of “bundled offerings”, says the founder.

“The world is moving towards joint subscriptions and family packs. [Recently, Apple launched subsidised family subscriptions in Apple One; Reliance launched family plans on JioPostPaid Plus] If you bundle education with entertainment, that is the brand most Indian families are likely to choose," Akanksha states.

It not only means cost saved, but also value earned.  “The bundled pricing also helps us reach ZEE5’s core audience in the northern belts of India, which is our focus market too in terms of the content we serve. That is why the app has Hindi,” she explains.

To spread through word of mouth and drive initial adoption without marketing, Eduauraa also roped in Bollywood actor Ranveer Singh as its brand ambassador.

It is, of course, not the first time that edtech startups have associated with celebrities to promote their apps — BYJU’S has Shah Rukh Khan; Great Learning has Virat Kohli; and Vedantu and Unacademy recently held masterclasses with Deepika Padukone and Anushka Sharma, respectively.

Akanksha reckons that celebrity “youth icons” like Ranveer appeal to students directly. They speak the lingo and their energies resonate with them.

“Kids these days are smart enough to decide which app to use. We wanted a youth icon who can tell them about learning. Ranveer is a very popular actor, and his association will convey that our product is not subpar just because it is affordable,” she says.

Eduauraa doesn’t share any numbers or growth targets. But, it claims to be growing due to word of mouth and getting feedback from “happy customers”.

The startup has been self-funded for nearly two years, and has no plans of raising capital in the next few quarters at least.

“We wanted proof of concept before focusing on growth. It is fulfilling to have users from UP, Bihar, and Rajasthan thank us for giving them education,” Akanksha says.

It has a 10-member core team, and nearly 200 people on retainership, handling content, animation, production, sales, and other functions.

In a cluttered K-12 segment that accounts for over 52 percent of India’s $180 billion edtech market, Eduauraa hopes to stand out through disruptive pricing and local language availability.

Akanksha believes that her team is building a “revolutionary product” that will bypass short-term losses for long-term gains.

“By being available at a price on par with OTT apps, we show that if you can afford entertainment, you should also be able to afford education,” she says.