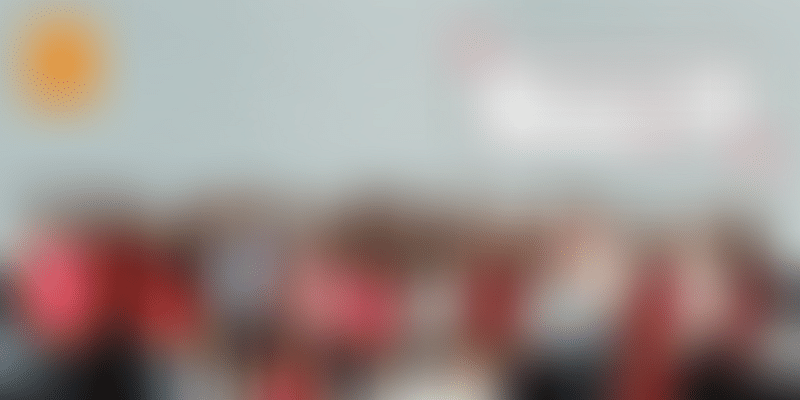 Indore-based edtech startup ClassMonitor has taken an online-offline approach to learning for preschoolers. It has over 30,000 registered users on its app.

When Vijeet Pandey returned to India in early-2016 after stints in retail businesses in the UK, he wanted to become an entrepreneur.

Three sectors beckoned him — agriculture, education, and healthcare. “I wanted to build something scalable in one of these sectors,” he tells YourStory.

Vijeet reconnected with his childhood friend Vikas Rishishwar, who’d built products across infotech companies for almost five years. The two identified a pain point across schools in their hometown of Indore — communication between teachers and parents — and decided to solve it.

In March 2016, Vijeet and Vikas launched ClassMonitor as a messaging platform for parents and teachers. It aimed to be a replacement for chaotic and spammy WhatsApp, and streamline communication between both parties.

While in the idea stage, the startup raised undisclosed angel funding from a Sweden-based investor, whom Vijeet had known during his time in the UK.

In 15 months, ClassMonitor enrolled over 100 schools, both at the K-12 level as well as branded preschools like EuroKids, Kidzee, Humpty Dumpty, etc. The messaging platform also added features like file-sharing, event reminders, school bus tracking, feedback mechanisms, and so on.

“We were growing, but we wanted to solve bigger problems that modern parents faced. From our continuous interactions, we realised that early learning for kids was a big challenge. The parents also wanted a solution that could keep their kids away from screens.”

In October 2018, it pivoted from a communication platform to a hybrid early learning tool that marries offline learning with digital cues and rewards. Essentially, ClassMonitor built an O2O model in edtech.

The ClassMonitor Learning Kit blends traditional teaching with modern learning to ease a child’s transition from preschool to formal schooling.

Every box contains 250 DIY activities, including flashcards, worksheets, rhymes, stories, art supplies, and games. It comes bundled with a subscription to ClassMonitor app that has AR/VR features and a QR code scanner.

“All sheets and flashcards have QR codes that can be scanned on the app to get the cues needed to complete an activity. The product integrates online and offline to bring interactive learning content for kids,” Vijeet explains.

ClassMonitor focuses on the fundamental development of a child based on five core areas: linguistic skills, logical thinking, sensory and motor skills, cognitive skills, and creativity. The kit is designed for early learners (0 to 8), and lets parents teach, play, and bond meaningfully with their children.

“We’ve built edtech for adults. Parents can personalise the pace of learning for their kids, choose activities they enjoy, and focus on areas that need development. Some learners may be good with vocabulary while others may be good at art. Parents can set learning outcomes, create assessment models, and track progress on the app.”

The learning kit comes in four different models, each priced at Rs 3,499 per annum (including the app subscription). The startup has also created a Skill Booster Kit priced at Rs 1,099 annually for kids aged 6 to 8. “This is for those who want to sharpen their maths skills and IQ,” explains the co-founder.

ClassMonitor sells its kits on its own website as well as on Amazon.

Since its pivot, the startup has grossed Rs 2 crore in revenue, and is looking to end the year with Rs 4-5 crore in the kitty. In 2021, it plans to grow the topline by 4X-5X through new products, wider distribution, and user growth.

The ClassMonitor app claims to have 30,000 registered users. Of this, 15,000 are paid subscribers, while 8,000 are premium users who’ve the Skill Booster Kit.

Vijeet shares, “We have a strong presence in Tier-I markets, but we’ve dispatched kits in 378 cities in India, and eight other countries. Indian immigrants were the initial buyers, but now even foreigners are getting it.”

ClassMonitor has tied up with Delhivery for third-party logistics, and has also created small distribution hubs across territories. It has also roped in 62 mom bloggers and resellers in 45 cities to distribute kits in their networks. Almost 35 percent of its sales come from this channel known as social commerce.

ClassMonitor’s B2B revenue has grown 100 percent in the last two months. “Schools have to charge session fees, but they can’t hold classes now. So, they are buying kits in bulk and distributing it to parents,” Vijeet reveals.

Its direct consumer traffic has also increased 50 percent per month since the start of the lockdown. With parents stuck at home for long hours with their kids, DIY engagement activities have grown organically. “Overall, COVID-19 has had a positive effect on all revenue streams,” says the co-founder.

In May, ClassMonitor also launched live classes on its app, and has recorded more than 1,000 enrollments in three months. These classes are 45-minute sessions, which guide parents on the DIY activities included in the kit.

Even though over 50 percent of its revenue comes from B2C channels, ClassMonitor is betting on the B2B market to drive growth. This consists of thousands of unbranded preschools in small-town India. “They have no understanding of how to run a preschool. It’s a huge market,” Vijeet says.

The startup is looking to raise a Pre-Series A round of $1 million shortly. “We’re in talks with a few VCs in India and abroad, and look to close the round in three to four months,” shares the co-founder.

ClassMonitor will use the funds to expand its product offering, add new technologies like AI and ML, scale up distribution channels, and basically, ride the tide in edtech — a sector that hit the hockey stick curve in the pandemic.

In a recent report, early-stage VC Blume Ventures pegged the direct-to-consumer edtech market for ‘kids below 8’ at $95 million.

“Parents want their children to start learning languages, new skills, or even coding and robotics from a very early age. Startups providing offerings for children in preschool or early years of school are gaining a lot of traction, especially in Tier-I and II cities,” it stated.

Blume Ventures also listed  ClassMonitor among the “interesting seed stage plays” in the gamified edtech space, along with startups like OckyPocky, Toiing, and Lattu Kids (which recently sold a 10 percent stake to Bharti Airtel). ClassMonitor also competes with the likes of Flintobox and PlayShifu in the educational activity segment.

All these products are primarily designed for kids in metros and Tier-I cities or the higher income strata in Tier-II locations. As learning becomes increasingly competitive, these offerings will continue to grow at a breakneck speed.

Overall, edtech is estimated to be a $1.96 billion market by 2021, according to KPMG. It is also projected to have 9.6 million paid users by then. “Supplementary education, where we operate, is about 39 percent of this market,” Vijeet says.

Is ClassMonitor open to M&A offers from edtech majors like BYJU'S, Vedantu, Unacademy, and others that have stepped up acquisitions?

"We have spent a lot of time in this domain and have achieved clarity now. We could become one of the good companies to be acquired," the co-founder adds.

Given the consolidation edtech has seen in 2020, that could well be soon.